I was recently asked about the color of handrails on Southern Pacific cabooses, which reminded me that I too needed answers in this area, for a Challenger brass cupola caboose I had received, painted but maybe not correctly. The handrails we are talking about are the classic curved ones on the side of the car, at each end, and the vertical rails alongside the steps.
For many years, SP cabooses had these handrails painted body color, that is, freight car red. The photo below shows this clearly (the photo of SP 783 was taken by Wil Whittaker at West Oakland on December 13, 1947). It’s interesting to note here that a blue flag is tucked into the grab iron on the end beam, yet another way a car undergoing service could be marked to not be moved. But the point of showing the photo here is the handrails, all of which are clearly body color. The car does have the road name spelled out, indicating it has been painted since the adoption of that lettering in June of 1946. 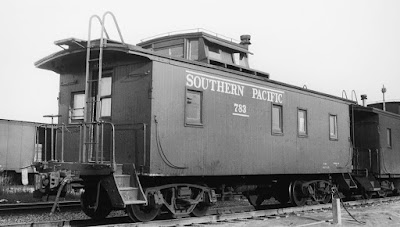 (I should mention that the information in this post is largely drawn from my book on SP cabooses, Volume 2 in the series, Southern Pacific Freight Cars, published by Signature Press in 2002.)
But in 1948, SP decided to paint caboose handrails white. We know this from the lettering drawing, shown below, first issued in 1946 and the basis for what you see above for SP 783. 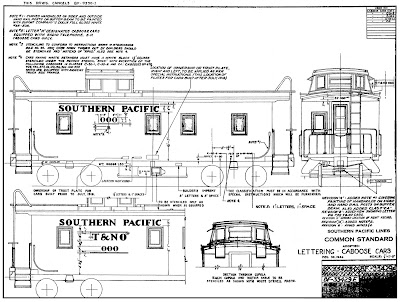 The critical part here is revision  A of 1948, which added note 1, at the upper left corner. Here is a blow-up of note 1, since it is hard to read in the complete drawing:

Note that it only specifies “handholds on sides” and “outside hand rail posts on buffer beam” to be white. Here is a photo of a caboose so painted, SP 645 (this is an Al Phelps photo at Auburn, California in May, 1951). The cupola is a replacement for the original slant-sided cupola and was applied in 1945. There is a handrail on the caboose body above the steps, shaped like an upside-down L, and as the drawing directs, it is not white. 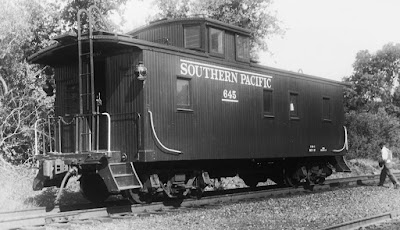 But this direction on the lettering drawing was not always followed. In the years following 1948, many if not most cabooses also received white paint on that L-shaped body handrail. The photo below shows this clearly on SP 72, at Watsonville Junction in 1948 (Wil Whittaker photo). This body handrail is entirely white, but many only had the outer, vertical portion of it painted white. 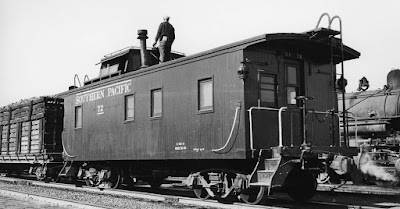 All the foregoing examples are photographs of the iconic SP wood caboose, Class C-30-1, built over a ten-year span, mostly at Los Angeles General Shops. The class totaled more than 620 cabooses, far more than any other single class, and when three-digit car numbers reached their limit at 899 (the 900s had other uses), numbers of scrapped cabooses (such as no. 72, above) began to be used. Though records are not complete, there are 165 known cabooses, out of the 620+, that received recycled car numbers, so they were not rare.
When production of Class C-30-1 ended in 1927, drawings were revised to incorporate improvements throughout the car, and two additional classes of wood cupola cabooses were then built. In 1928, 50 cars of Class C-30-2 were built at Los Angeles. In 1929, another new class was designated, Class C-30-3, with a quite different construction: the body was framed with steel structural shapes instead of wood. About 80 of these cars were built by the end of 1930. This class is easily recognized by the visible ends of the steel framing members at the bottom of the car side.
All the cars of classes C-30-2 and -3 received numbers of older cabooses, again because no new numbers remained available. The photo below shows SP 5, a Class C-30-3 car at West Oakland in July 1949, and its white handrails include the side rails and the vertical parts of both the rails adjoining the steps (Wil Whittaker photo). The framing ends along the car side are obvious in this lighting. 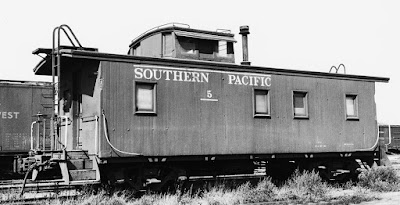 The model I needed to paint happened to be a Class C-30-3 car, so the photo above was essential. I chose to do the kind of handrail white pattern with vertical and side rails only, as you see below. I like that the car carries such a low number, though not as low as the photo above! 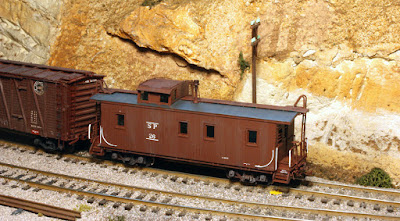 I should mention that the same 1948 change to white handrails took place on steel cupola cabooses also, and the changes may have originated with the first class of SP bay-window cabooses, Class C-30-4, delivered in 1947 with white side and end handrails. They also had vermilion red ends, an application that in 1955 would lead to the painting of caboose ends in Daylight Orange.
This small-looking problem, of how to paint a minor detail of a model, is an example of the never-ending requirement for prototype modelers (or at least prototype-oriented modelers)  to consult the practices of the modeled railroad, in my case the SP.
Tony Thompson
Posted by Tony Thompson at 11:55 AM