I’ve posted two descriptions of the ways prototype lettering is applied, and why it may matter to modeling applications of lettering. (The second of those posts is at this link: https://modelingthesp.blogspot.com/2019/12/prototype-lettering-part-2.html ). This post addresses modeling of the prototype application process.
I want to show a terrific example of modeling this distinctive prototype process, sent to me by Bill Gill. These are photos of a model scene he created for the New England, Berkshire & Western layout at Rensselaer Polytechnic Institute (RPI) in Troy, New York, and echoes a number of the prototype scenes I showed in my first two posts. First, here is the prototype image he began with: 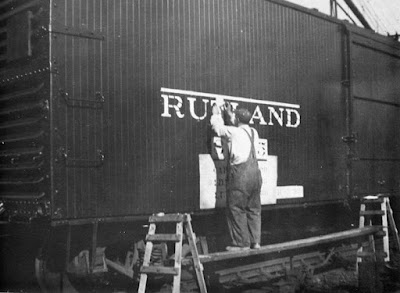 The Rutland, of course, is the prototype railroad that is the foundation of the NEW&W layout. With Bill’s permission, here are three photos of his modeling. This first one clearly shows the working platform for the painter, and the stencil applied to the car side. 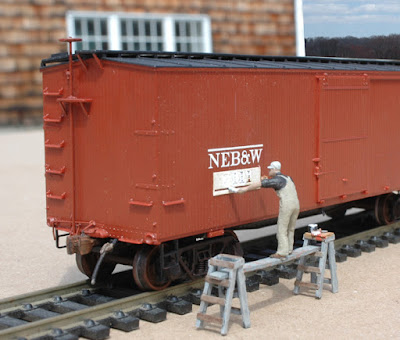 You can see more clearly that this is really an HO scale stencil in the view below, from a higher angle. The HO stencil was laser-cut by the VectorCut service, unfortunately no longer in business. 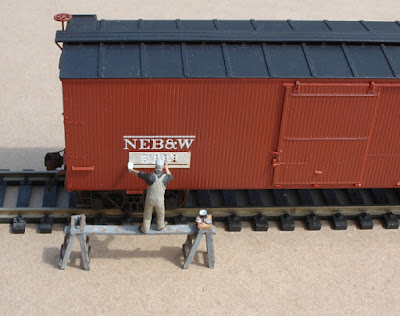 This scene was set outside the NEB&W backshop on the layout, as you see below. This is a wonderful adaption of an everyday prototype lettering process to a model, and such scenes are certainly rare in model form. 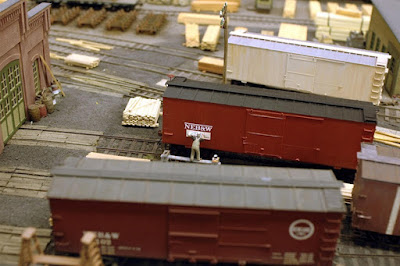 This photo was taken before the layout was removed from its longtime location at RPI and put into storage, while layout space is renovated. We can all hope that the layout is repairable and can be renovated and returned to service when it reaches its new home.
Thanks to Bill Gill for these very interesting and (I think) unique photos depicting in model form, a very familiar prototype scene. Not every layout has a suitable place for such a scene, but if yours could include it, it’s worth considering.
Tony Thompson

Posted by Tony Thompson at 9:16 AM