A couple of years ago, Albrae Models released some beautiful brass models in HO scale of SP fire service cars (which, as Albrae notes, were called “water cars” by SP). They did two different cars, following prototype photographs carefully, with the two cars having rather different overall appearances. (SP practice with such cars was enormously variable and rarely can you find two alike.) You can see the Albrae web page about these models at this link: http://albraemodels.com/models/AB-410.htm .
(A word on the nomenclature: from early in the 20th century, cars obviously equipped with hoses, pumps, pray nozzles, and so forth, and clearly intended for fire-fighting duties, were lettered as “water cars.” This can be seen over a range of these years in my Volume 5 on tank cars, in the series Southern Pacific Freight Cars [Signature Press, Berkeley and Wilton, 2008]. In the very late years of SP, some such cars did get lettered as “fire service,” but this was the exception even then, and certainly not the rule.)
I purchased one of the cars with wood-plank walkways, painted Smoke Gray, the SP maintenance-of-way color after 1959. But since I model 1953, of course, this wasn’t going to work. I simply airbrushed boxcar red onto the entire car. I then substituted solid-bearing trucks for the roller-bearing trucks supplied with the model, another essential back-dating detail. Then a coat of gloss permitted application of SPMW decals from Microscale set 87-155. In all candor, this is not a great set, seemingly based on only a few prototype cars, with some odd-sized letters and numbers, and missing a lot of what a modeler might want for MW models. But it does have nearly everything that was needed for this tank car.
The decals were protected with an overspray of Dullcote, then I used my standard acrylic-wash weathering procedures (see the link to my weathering pages at the top right of this blog page, or you can go directly to them at: http://modelingthesp.blogspot.com/p/a-few-years-ago-richard-hendrickson-and.html ). These cars stood out all year in the sun and weather, but were returned to the shops annually to be checked over and to make any repairs that were needed. After all, a fire service car needed to be in complete working condition to do its job! These annual visits, at least in the transition era, seemed to result in paint jobs from time to time, unlike most MW equipment, so photographs show that these cars were usually not particularly faded or dirty.
In later years, the cars seemed somewhat more neglected, and often exhibited very visible rust stains, very evident of course on the light gray paint. Here is an example, SPMW 5493, from a series of photos I took at Roseburg, Oregon, in 1994. 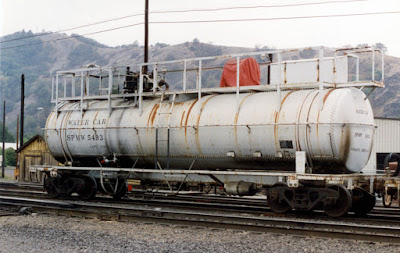 Note here the rust staining on the tank, and the cloth cover on the hose reel, not sure why. In this case, as was standard for SP water-car conversions, the dome has been cut off; thermal expansion of water does not require an expansion dome or safety valves.
For another example in the same string of fire-fighting equipment on the same day, here is SPMW 7894: 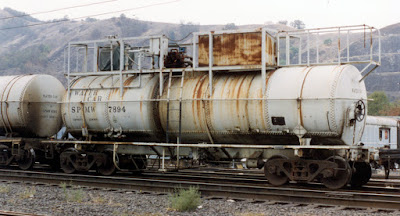 This is a different tank car body, with circumferential rivet seams, and has a different walkway, with two different widths; it also has a lot of what is presumably oil and grease staining below the water pump, as well as a very rusty tool box.
And shown below is a third car from that string, SPMW 5898, even more rusty; this would most easily be modeled with the excellent rust-streak decals from Weathering Solutions (see my post about their decals at this link: http://modelingthesp.blogspot.com/2017/07/using-weathering-solutions-decals.html ). 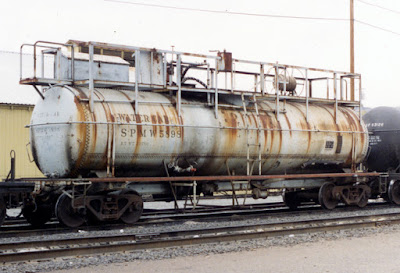 Note here that all three cars have different topside arrangements, in location of the tool box, water pump, and hose reel. But all three are lettered “water car.”
My own model, being boxcar red, will not show this rust staining nearly as much. But I did try to show some such markings. 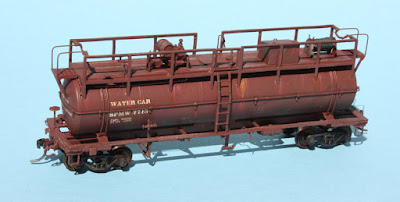 My choice of car number, SPMW 7715, was based on the need to find an SPMW number for a tank car with circumerential rivets at the time I model. This car, SPMW 7715, was converted to MW water service from SP 48396, a member of Class O-50-8, car series 48200–48399, built in 1918 by Ralston. (I used the 1956 MOW roster from the SP Historical & Technical Society.) Ralston is an unusual builder for tank cars and so much so, that in fact Ralston subcontracted the construction of the tanks, and only built the underframes for these cars. But they were pretty standard SP 12,500-gallon tank cars.
It has been fun to research these cars and to decorate one to serve on my layout. I have an “outfit track,” as SP called them, on which various SPMW cars are spotted at various times, along with contractors’ work cars and occasionally a Western Union work car. This adds variety to the routine round of freight cars moving to and from industries, and conveys even more Southern Pacific spirit in the look and operations of my layout.
Tony Thompson
Posted by Tony Thompson at 10:24 AM