Layout goals can be fuzzy or specific. For many layout builders, goals are pretty general and not especially focused. In most cases, that’s no problem. But the ambitious ones among us frequently do have very specific goals. The point of this commentary is to offer some observations about how those goals differ, and why one might care. The point is very much not to rank or critique these goals relative to one another.
One type of goal is to reproduce with great accuracy a particular place or group of places, say for example Potomac Yard in Washington, D.C. and its environs. This kind of goal obviously calls for a great deal of research and exploration of all kinds of resources, just to find out what was at the chosen place or places in the year or era of interest.
It usually also calls for considerable modeling effort, since few if any structures will be buildable without scratchbuilding. In addition, the effort usually also requires good judgement in making the many compromises required by the inevitable selective compression to get a layout into a manageable size. And ordinarily the same efforts in research and model building will underlie the rolling stock that will have to be acquired to populate such a layout. This type of layout can be visually stunning and often represents superb modeling, though operation is not always a major part of the product.
At what could be called the other extreme is the layout built with focus primarily on an operating goal, such as sufficient running distance and towns to permit challenging timetable and train order (T&TO) operation. Or perhaps combinations of single and double track, controlled by a CTC panel, or in a more modern era, track warrants or the equivalent. Achieving this kind of goal can result in a superb operating experience for visitors.
The “operator’s” type of layout has been entirely freelanced in many cases, but can reflect prototype locations too, though often freely interpreted so as not to conflict with the operating goals. Even a prototypical layout location may be part of a layout with challenging operation, for example the Pennsylvania Railroad heading westward from Harrisburg up the Juniata River. (That kind of layout set in the transition era would have to reproduce phenomenal traffic densities, of both freight and passenger trains, to be prototypical in operation.) Layouts of this general type are definitely fun to operate, but may be less appealing to the casual visitor, who sees only the physical plant.
My model railroading goal has always fallen between these two extremes. I want to reproduce the railroading itself, as it was conducted at the time I chose, particularly on the freight side, both as far as operating arrangements and also with regard to equipment. I find locomotives interesting, as do most modelers, but freight cars are an even greater interest. I have a reasonably large freight car collection, nearly all of it appropriate for my modeling period. The layout, of course, should display these freight cars in appropriate context. Here is one of my PFE refrigerator cars, spotted at the Coastal Citrus Association in my town of Santa Rosalia. 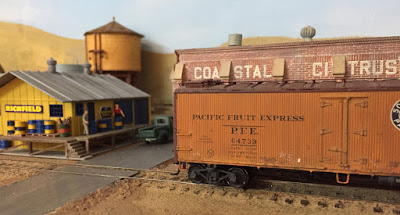 In the background is the SP water tank, and at left is the Richfield bulk oil dealership, a model I described  modifying and building in earlier posts (see the final one at: http://modelingthesp.blogspot.com/2017/03/modifying-interstate-oil-part-5.html ).
Another goal I have always had is to convey accurately the era of my modeling and my layout environment. I chose 1953 as my modeling year, and have been careful with not only freight cars and paint schemes on rolling stock, but industries, highway vehicles, and even advertising such as billboards. All these factors combine to emphasize the 1953 year. As an example, here is the Chamisal Street crossing of the SP Coast Route, in my mythical town of Shumala. The SP depot is at left. 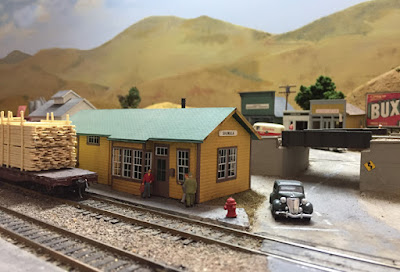 Southern Pacific modeling has always been taken pretty seriously on my layout. This depot, for example, is scratchbuilt from the SP plans for its Sylmar depot, as I described in some detail in one of my columns in Model Railroad Hobbyist, the issue for November 2012 (you can read any issue of MRH on line, or download it,  at any time, for free, at their website, www.mrhmag.com ).
I don't model a specific prototype place nor specific buildings, though my layout is set in a particular area of California. I greatly respect and admire those who choose one particular town or towns and attempt to reproduce actual buildings and track arrangements. But that's not my area of interest, and in any case the very large amounts of selective compression required in most cases bothers me.
Instead, by choosing a rural area with small towns and small industries, such as packing houses and bulk oil dealers, I can get closer to realistic sizes of buildings. To approach my goal of reproducing railroading on the Southern Pacific, I don’t feel I have any need for strict devotion to particular structures or specific towns. Instead, in what can be an even more challenging goal, I try to capture a more general spirit of the time and place. One example is conveyed by this photo looking up Willow Lake Road in Santa Rosalia, with the familiar SP depot design, Common Standard No. 22, at left, and the offshore fog bank evident beyond the waterfront, on the horizon at right. 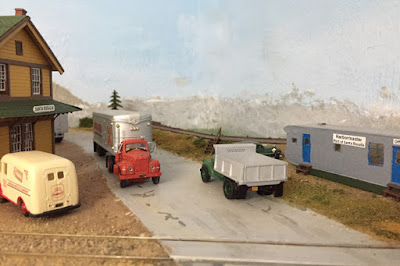 I always enjoy visiting layouts with obvious goals, even ones that are not entirely successful, because there are always fascinating insights into how the builder approached, and tried to solve, the various challenges that arose in the process. I hope visitors to my layout have the same feeling,
Tony Thompson
Posted by Tony Thompson at 12:59 PM