Every modeler with a little experience knows that railroads, over the years, have occasionally done test applications of paint schemes for freight cars, passenger cars, and locomotives that ultimately were not adopted. Sometimes these only take the form of an artist’s rendering, but other times they may be painted on actual rolling stock as a test. But when disapproved by management, they disappear. Still, their often exotic appearance has an irresistible appeal for many modelers.
Some of these proposed schemes are well known. For example, the Southern Pacific considered painting its new loader-equipped box cars, that had Hydra-Cushion underframes, in the same scarlet and gray paint newly being used on locomotives in 1958. They went as far as to paint one car, and spot it at the Beale Street team track, a couple of blocks from SP headquarters in San Francisco, as you see in the photo below (SP photo from the Shasta Division Archives). 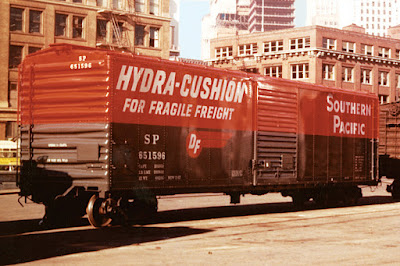 But this was not to be; executives did not approve the scheme (perhaps not surprising, as passenger car and locomotive paint schemes were considerably simplified in this same year of 1958). So SP box cars continued to be painted pedestrian boxcar red, with the special equipment lettering in yellow, as shown by this additional member of SP Class B-50-47, at the same location as the above photo (and also from the Shasta Division Archives), a few months later. 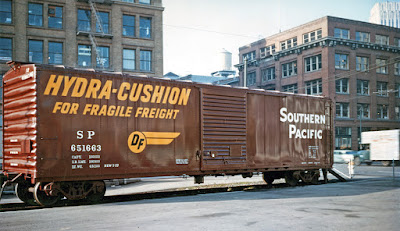 Cotton Belt did paint one group of box cars in this scarlet and gray livery, but parent SP did not. So even though the scarlet-gray box car is very attractive, it is not a paint scheme that ever saw service, beyond that single test car, SP 651596, which did run for several years in that paint.
Another example that perhaps deserves emphasis is the “curved corner” paint scheme tested by Pacific Fruit Express. As shown on the model below, it had a kind of streamlined appearance, with the top corners boxcar red and the bottom corners black, and the PFE name in a script lettering. This paint scheme is prototypically accurate, even to the car number; and in fact this is the only car on which this paint scheme was ever lettered. 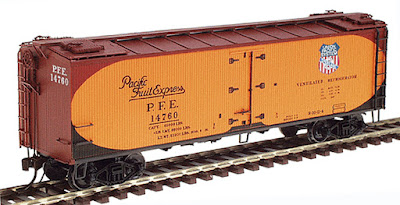 So the good news is that this at least does represent a single real car. The bad news is that the scheme was disapproved by management after a brief test, and PFE records indicate that after its application in June 1938, it was removed before October of that year. So if you model the particular four months in 1938 when this prototype existed, you are fine; otherwise it is definitely what we call a “foobie.” (A definition of that term can be found in a previous post about a similar subject: http://modelingthesp.blogspot.com/2017/07/paint-schemes-real-and-imaginary.html ). But I would hate to tell you how many layouts I have visited that had this PFE model in plain sight.
A more exotic example, perhaps, is shown in a pencil sketch sent to me some years ago. It depicts a tank car of the Union Oil Company, painted orange and lettered in blue (the company’s colors for many years), including the company’s “76” trademark. But as far as I have ever been able to determine, no Union tank car was ever painted this way in fact. 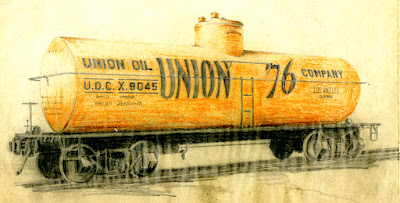 The orange here looks faded toward yellow, but close examination of the original clearly shows that it really is orange.
My good friend Richard Hendrickson used to hate discovering images like this, fearing not only that some manufacturer would quickly decorate models this way, but that modelers everywhere would snap them up, and we would be seeing them on layouts for years to come — even though no prototype ever existed, even briefly. (Kind of what happened with the PFE curved-corner scheme.) Let’s hope this one doesn’t have that history.
Better known, but still totally bogus, is the Union 76 paint scheme decorated by Athearn on numerous models over the years. It’s shown below on the grossly oversize Athearn three-compartment tank car, a car body which has no known prototype anyway.

In a way, the imaginary paint scheme is kind of perfectly suited to the imaginary tank car body . . .
I often say to people that my advice is, “don’t model the unusual, model the typical,” but the subject of the present post goes beyond that — these aren’t just unusual paint schemes, they truly are, in practical terms, non-existent ones. Anyone with a remote interest in prototype modeling would, I hope, never allow any fellow modeler to see that they owned one of these beauties.
Tony Thompson
Posted by Tony Thompson at 12:07 PM