Modelers take a wide variety of approaches to ballasting track, and of course the prototype exhibited a wide range of track conditions, from pristine, fresh rock ballast on main lines, to spurs submerged in mud or overgrown with weeds. But one thing to remember if you model the transition era or before: most railroads had assigned section gangs along main lines, and those gangs did a great deal of work maintaining the line. This included keeping rails properly set and aligned, but also often included careful work with ballast.
The photo below is from the Southern Pacific employee magazine, the SP Bulletin, in an issue from the early 1950s. It accompanied an article about how important good crushed rock ballast was to dependable mainline operation. But noteworthy in this view is the pronounced and very straight ballast edge.

Not many of us have achieved this kind of ballast appearance on our main lines. I would submit that this is not an unusual appearance on a Class 1 railroad in that era.
Of course, as I mentioned, many other kinds of track appearance can be found with a little looking. It was very common for there to be a footpath running alongside the track, worn by the use of those track gangs. It isn’t evident in the photo above, but the John C. Illman photo below does show an example. It was taken from a vestibule on Daylight No. 99 near Gato, milepost 330, on the SP Coast Route, on March 18, 1951 (love the semaphores!). That’s the Pacific Ocean at left, of course. 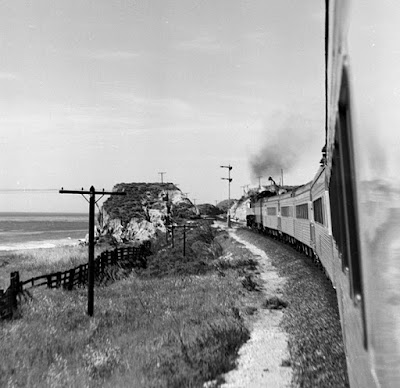 The speed limit at this point was 65 mph for the Daylight, and doubtless it was moving pretty close to that speed. The locomotive is GS-5 no. 4458.
In many other places, of course, ballast wasn’t particularly neat and could be fairly dirty. The SP company photo below shows the Daylight west of Santa Barbara, running on a main line with barely elevated dark ballast, and with a siding at right that is almost submerged in the surrounding soil (You can click on the image to enlarge if you wish.) 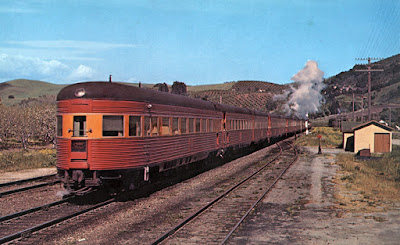 As the siding in the above photo suggests, secondary tracks were often not very visibly ballasted, and the same was certainly true of yard tracks. Below is a Malcolm (Mac) Gaddis photo from April 1954 at San Luis Obispo, with Consolidation 2803 and Alco switcher 1467 at work. In the center background is the familiar Juillard-Cockcroft brick building (which still stands). The point here is the appearance of the yard tracks, with the dirt surface of the yard about flush with the tops of the ties, and weeds visible in the nearer tracks to the camera.

These examples are all drawn from the SP Coast Route in the transition era, as many viewers will realize, and typify the kinds of track appearance I have tried to achieve on my layout. If you too want to have track and ballast that look prototypical, this is the range of things that you want to duplicate. Look at a selection of photographs from your modeled area for inspiration.
Tony Thompson
Posted by Tony Thompson at 9:11 AM