This series of posts is about a partly completed model of an automobile car that I inherited from Richard Hendrickson. It is a considerably altered model from any of its components, but I was able to identify it as intended to represent Santa Fe’s Class FE-25. The most recent post in the series about completing this model showed how far I had gotten at that point (see it at: http://modelingthesp.blogspot.com/2018/03/hendrickson-auto-car-part-3.html ). Only a couple of problems remain, and here I’ll deal with the first one.
This problem is that a full-length Athearn steel weight was glued into the car, and at this point, with the underframe work completed, would hardly be practical to remove. With it in place, I would either have to drill and tap the steel strip for 2-56 screws to attach coupler boxes, or else attach an Athearn-like coupler box arrangement (referring to the type with the steel clip cover). I do know that Richard was okay with the Athearn boxes, and used them on several models. Here is how this car looked at this stage; note that Richard left the stub of the original black underframe extending to the left of the temporary truck support block. 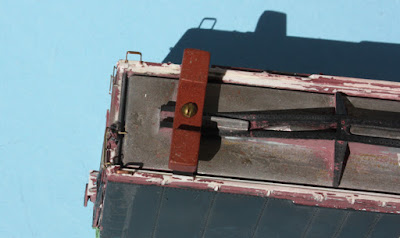 Other added details like sill steps are readily visible here, as well as the scratchbuilt side sill.
The reason for the state of the model that you see above is easy to determine. I had an Athearn gondola underframe of my own (that was Richard’s basis for this auto car underframe) sitting in my parts collection, and when it’s compared to what Richard did, you can see what resulted. First of all, the model of the automobile car is just a little longer than the gondola underframe. I set the gondola part on top of the auto car to show this.

If Richard had installed the gondola underframe without change, the coupler pockets would not reach the end sill. This means, of course, that the truck-to-end sill dimensions are different on the Athearn gondola and on the Athearn 50-foot automobile car (the basis for this car body). Note also that the middle crossbearer of the stock underframe was removed, as the corresponding Santa Fe underframe only had the two outer ones.
In addition, the crossbearer shape is fairly different on the auto car, compared to the gondola, and obviously Richard simply cut down the Athearn crossbearers to match the strongly tapered shape needed for the auto car. You can see that in this angled view with the extra frame alongside. 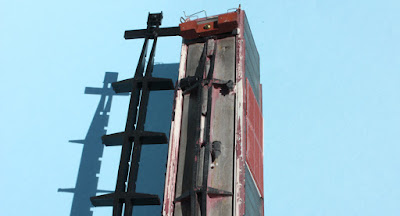 With these observations in mind, I think it is pretty clear that Richard intended to add coupler pockets from a second gondola underframe. I decided to do the same here. (I only describe all this because it may be of interest to others using parts like the Athearn underframe.) I went ahead and cut off the coupler pocket ends from the Athearn gondola  frame:

When fitted to the underbody of the model, the coupler box now comes right to the car end, as it should. This confirms my judgement that Richard intended to follow this same procedure.

This car is proving to be an interesting challenge, not only to use my own knowledge and ideas to complete the model, but to try and grasp what Richard was probably going to do. I wouldn’t feel a need to slavishly follow his exact path (if I knew it, that is), but since I don’t know it, I have the experience of mixing my and his approaches to finish the car. I will continue with this project in future posts.
Tony Thompson
Posted by Tony Thompson at 12:56 PM