In an earlier series of posts, I described some of the Maintenance of Way (MOW) cars I have modeled, following SP practice, for my layout.  I began with a box car and tank car (for domestic water) in my first post (it’s at: http://modelingthesp.blogspot.com/2013/03/modeling-some-sp-mow-cars.html ). The second post described modeling a truss-rod flat car and an on-line ice-service car, made from a former PFE car (you can find it here: http://modelingthesp.blogspot.com/2013/04/modeling-some-sp-mow-cars-part-2.html ). The third post covered a former passenger car converted for MOW use, starting from a Roundhouse “old-time” baggage car (it can be seen at this link: http://modelingthesp.blogspot.com/2013/04/modeling-some-sp-mow-cars-part-3.html ), though in fact this Roundhouse model as originally configured is much more like an RPO car.
In the present post I want to expand on this, to some additional cars. A car type which is very well represented in SPMW rosters (see the first two posts in this series, links provided in the paragraph above) is box cars. Essentially the track forces acquired these cars by keeping in contact with the Mechanical Department, and arranging to choose the best available in a group being scrapped. Often the chosen car(s) would then get an overhaul and fresh coat of paint, but sometimes if needed immediately might only have reporting marks changed and then pressed into service. I have modeled both kinds of paint schemes.
I show below two models built from Westerfield kits, both of the body style typical of Harriman Lines Common Standard classes B-50-2, -3 and -4. Built from 1906 through 1909, there were more than 10,000 box cars in these three classes. more than 7000 of them for the SP and T&NO railroads. They continued as major players in the Southern Pacific boxcar fleet until about 1930,w hen their numbers began to decline precipitously. By 1940, they became rare in revenue service. (For a fuller history, see Chapter 6 in my book, Southern Pacific Freight Cars, Vol. 4, Box Cars, Revised Edition (Signature Press, 2006 and 2014.)
As soon as these cars began to leave the revenue-car roster, of course, maintenance people were selecting the soundest cars for their own use. SP rosters of MW cars do show many box cars from these classes converted to MW use in the late 1920s and during the 1930s, exactly while their revenue numbers were falling sharply. So if a modeler of the 1950s, like me, wants to operate one of these fine Westerfield models, it will have to be as a member of the SPMW roster.
Here is one example, depicting the kind of car that would have been pressed into service without repainting, leaving the former SP emblem still on the car, but with a paint patch for the SPMW car numbering.

More commonly, though, the MW people would have gone over the car to make sure it was mechanically sound, made any modifications they desired, and then would have given it a fresh coat of paint, with no visible indication of its former status in a revenue paint scheme. What would that look like? Here is an example of one such car, which has received an end door and a ladder and a sill step alongside the side door (the same photo was included in the first link cited at the top of this post). The photo is from the Arnold Menke collection, location and photographer unknown. Note that the only item of dimensional data is the light weight. The SPH&TS roster shows that this is a former B-50-2 car, number 89084, converted to MW on December 30, 1944. 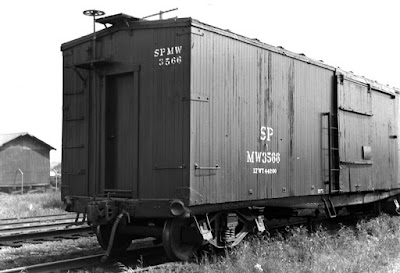 My model is patterned after this paint scheme, though I left the model without the kinds of body modifications shown above. I also happen to have chosen a very interesting Westerfield kit here, which models the one and only SP car to receive a Van Dorn pressed-steel end (kit 1761). I showed two views of the prototype car in an earlier post (you can see it at this link: http://modelingthesp.blogspot.com/2015/08/using-prototypes-older-than-your.html ). This model too was given the very Spartan kind of lettering shown above on SPMW 3566. It is shown in the photo below on the outfit track in my layout town of Ballard. (You can click to enlarge.) 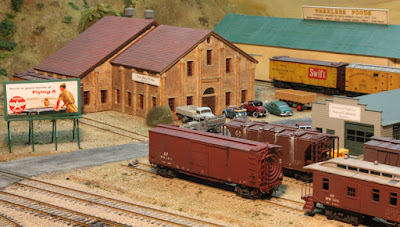 Both these box cars can be operated with waybills for such cargoes as track materials and supplies. Another common load would have been track tools for use on some roadway maintenance job. Here is just one example of the waybills for MW box cars in use on my layout; note that it is prominently marked as a “non-revenue” bill. 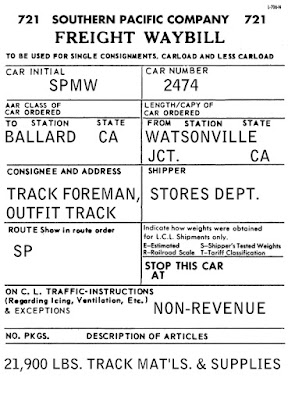 These box cars are useful as part of the overall layout operation, because of course they are part of the work of the railroad. Having set aside an outfit track in my town of Ballard, they have a place to go, and sometimes a place to remain through several operating sessions. Just like the prototype.
Tony Thompson