Many readers by now will know about the new Kadee freight car, an insulated high-pressure car of the kind predominantly used for LPG (Liquified Petroleum Gas) in the transition era. The same size car could also be used for chlorine and anhydrous ammonia. This particular model is ICC Class 105A300W, as built by American Car & Foundry during the years 1947–1950, with what AC&F termed a Type 27 underframe. More than 1650 of these cars were built in that time period.
As one expects of a Kadee freight car, the model is exquisite. Here is a photo of the car I just received. (You can click on the image to enlarge it.) 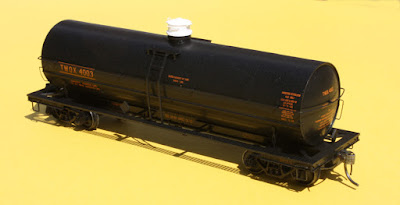 This car is lettered for Tidewater Associated Oil Company, and uses the TWOX reporting marks identified with the Eastern Division operations of the company, headquartered in New Jersey. However, the company freely used its cars as needed throughout the country. I have written previously about the history and operations of this oil company, if you’re interested in that (see this post: http://modelingthesp.blogspot.com/2013/12/associated-oil-company-background.html ).
In the period after World War II, the growth in LPG traffic was, to choose a delicate word in this topic area, explosive. In an effort to speed up return of empty LPG cars for loading, the suggestion was made to paint their valve bonnets white, as you see on this car. (This was not mandatory, and not all operators of LPG cars did this.)
One characteristic we have come to expect on Kadee rolling stock is outstanding printing of the lettering. This car is no exception. Below I show the right end of the car side, with the various specifics of lettering about car construction and inspection. 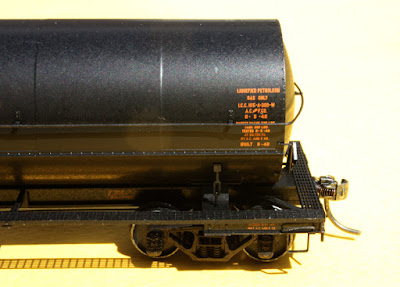 The shadow in this photos, incidentally, shows you that the running board represents see-through metal grid and is beautifully rendered.
I have an Associated Oil dealer on my layout (the Associated Oil Company became in 1926 the Associated or western Division of Tidewater Associated Oil), so I can deliver LPG there in this car. I have posted previously about the  construction and operation of that dealership model (see it at; http://modelingthesp.blogspot.com/2014/03/more-on-associated-oil-dealer-model.html ).
I don’t know what lettering schemes Kadee has in mind for the future of this model, but as always they will be carefully researched and accurate. Unlike most manufacturers, Kadee does not letter models for owners which did not own or operate that particular car, so you can trust any version they may choose to do. For myself, I am certainly delighted with this one, and look forward to seeing what comes next.
Tony Thompson
Posted by Tony Thompson at 11:21 AM