As operators can read in my timetable for the Guadalupe Subdivision of SP’s Coast line (adapted from the prototype for my layout), the entirety of the location of Shumala is in yard limits. Here is the relevant part of my timetable adaptation:

Shumala depot is at milepost 270.1. I described preparation of my layout’s timetable in a column for Model Railroad Hobbyist back in October 2014 (downloadable at www.mrhmag.com), and summarized it in a previous blog (see: http://modelingthesp.blogspot.com/2014/10/my-column-on-timetable-construction.html ).
Placing the Shumala trackage within yard limits simplifies switching because Rule 93 was as follows (every railroad worded it a little differently, but this very clear statement is a Santa Fe version):

But although the yard limits on the SP main track at Shumala extend in both directions beyond what is visible on the layout, that is not true for the track of the Santa Rosalia Branch, which leaves the SP main at Shumala to head down the branch. In the absence of an actual yard limit sign, I have been verbally informing operating crews where that sign should be located. I think it’s now time to install a physical sign.
There was (as you would expect) a Common Standard for yard limit signs; the one shown below was published on page 31 of Southern Pacific Lines Common Standard Plans, Volume 1 (Steam Age Equipment Company, Dunsmuir, CA, 1992). This particular drawing is a 1963 revision of the original standard arrangement, which among other things specifies aluminum blades. But the sign geometry and mounting are clearly shown, so I can readily back-date this item to the wooden sign era. Blades are 8 inches wide and 2 feet, 6 inches long to their longest point. (You can click on the image to enlarge it if you wish.) 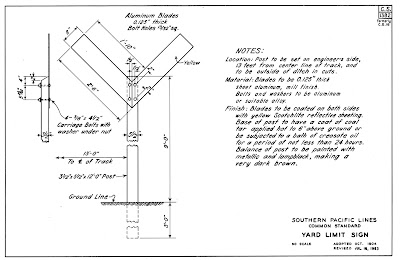 One point of possible era confusion from the 1963 drawing, is the instruction that blades are to be yellow. I have not found a transition-era photo showing an SP yard limit sign which is clearly other than white, so could choose to make mine white, but in the absence of evidence other than the drawing above, have decided to go with yellow.
The simplest way to make a sign like this is just to reduce the drawing above to HO scale and print on light card stock. The blade length, 30 inches, is 0.34 inches in HO scale (divide by 87). I did that and prepared a scale 4 x 6-inch piece of stripwood for the post, painted dark brown. The blades are just the cardstock I printed out. For the choice of yellow blades, I could do it by using a yellow “highlighter” felt pen on a white cardstock sign, or simply use yellow cardstock, which I ultimately did.
The sign was glued to the 4 x 6-inch post with canopy glue, then inserted into a hole alongside the track, also with canopy glue, and adjusted so the top of the post was 9 scale feet above the ground, as called out in the drawing above. Here is the installation, with Chamisal Road in the background. 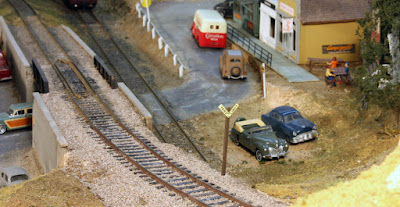