In an earlier series of posts, I described some of the Maintenance of Way (MOW) cars I have modeled, following SP practice, for my layout. Those posts were in March and April of 2013, and can readily be found by using the search box to the right. In this post, I want to say a little about how these cars are operated on my layout.
I will begin with ballast cars, since these are often present in photos of any roadway maintenance scene. I have discussed SP ballast cars in a post back in 2011 (here’s a link: http://modelingthesp.blogspot.com/2011/03/choosing-model-car-fleet-7-hoppers.html ). Here I will only mention my stand-in for a Class H-50-6 Hart Selective ballast hopper, modeled from a standard Athearn twin hopper, with added styrene to model the longitudinal dump doors (though they are oversize). The slope sheets should reach nearly the top of the car side, not have the lower-angle slope seen here, but that would represent a lot of kitbashing to get right. These cars were still classified by SP in 1953 as AAR Class MWB, though they carried revenue-service car number series. In the spring of 1956, SP would discontinue use of the MWB classification, and re-classify all cars like this as AAR Class HK. But as a 1953 modeler, they are still MWB cars to me. 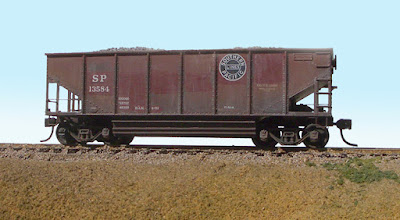 In addition, Southern Pacific commonly moved roadway ballast in drop-bottom or GS (General Service) gondolas, and I have made a couple of ballast loads for my GS gons to serve this purpose. Whichever kind of car covers the ballast moves, a waybill like this is used (based on what I was told about how these loads were moved), since I have an outfit track at Ballard on my layout. 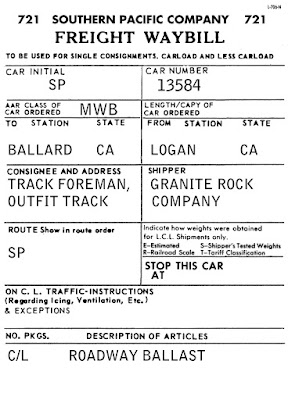 It’s well known that much of SP’s Coast Line ballast came from the Granite Rock quarry.
When SP used GS gondolas to transport ballast, they tended to be the Enterprise steel cars built in the 1920s. I have a number of these in my fleet, and any one might be chosen for a ballast delivery in a particular session. I have removable loads for these cars (built by the methods described in a previous post, at: http://modelingthesp.blogspot.com/2012/02/open-car-loads-bulk-materials.html ). Here’s a photo. 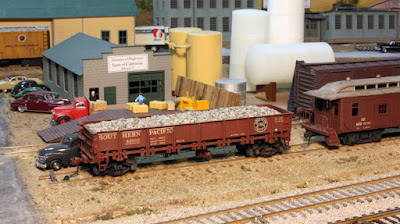 The car is shown on the outfit track in Ballard on my layout. The MW-converted passenger car at right was described in an earlier post (see it at: http://modelingthesp.blogspot.com/2013/04/modeling-some-sp-mow-cars-part-3.html ).
A waybill for a ballast load in a GS gondola, then, might look like this. 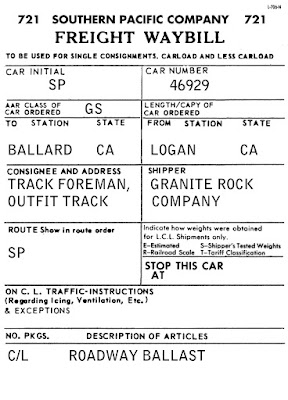 Obviously the same source and same destination, but in a different car type.
Though MOW cars are not likely to be a big proportion of any layout’s car fleet, they do have a role to play, and including that role diversifies the car movement patterns that operators experience. I plan to add more waybills for MOW car activities in the future.
Tony Thompson
Posted by Tony Thompson at 12:11 PM