I have written several times about my creation of an Associated Oil Company bulk dealer in my town of Shumala, most completely in my “Getting Real” column in Model Railroad Hobbyist, the issue for March 2014 (you can download this or any issue of MRH from their site at: www.mrhmag.com ). But in the era that I model, the 1950s, most small towns had at least one bulk oil dealer, often two or three for the various major brands. I decided to have one in the name of a prominent West Coast oil producer, Union Oil, in my town of Ballard.
I began with a Chooch kit for an oil dealer (no longer in production). It provides two vertical tanks and a tank enclosure or berm, along with a pump house and some molded oil drums scattered about. These parts are nicely done, but are nowhere near enough to represent a real oil dealership. My first step was to figure out how to add another large tank and some smaller tanks. I used stripwood to build additional tank enclosure in the style of the kit berm, added a medium size tank, and put together the typical ladder and stairway connections to permit access to the tank tops. Here is a view of those additions, with the original Chooch kit base glued to a larger piece of 0.060-inch styrene. 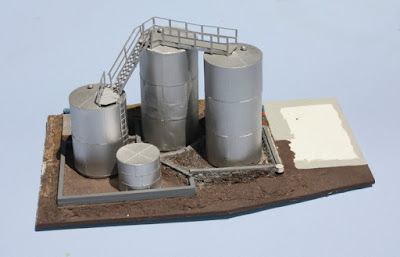 In this view, the blank space on the right is the location of the warehouse and office building, essential to any oil dealer. The stairway is mostly scratchbuilt out of styrene sheet and strip, with the stairway and its railings from the Central Valley Stairs and Ladders set.
From the front, the three major tanks are visible, along with the small pumphouse at right, that was supplied in the kit. The various molded-on oil drums are evident here, though it seems improbable to me that drums would actually be strewn around like this. Still, they help identify the business. I added a small Union 76 emblem on one tank. 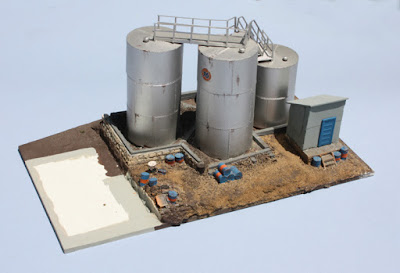 Since a warehouse/office is essential, I simply scratchbuilt one from Evergreen styrene clapboard sheet, with Pikestuff shingle material for the roof. Interior corners of the structure received styrene strip reinforcement, as you see here. 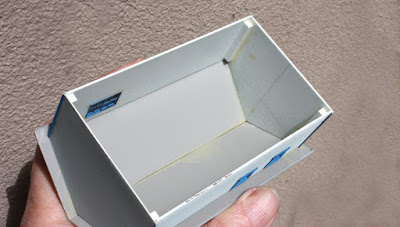 When completed, this simple building is all set to be a vital part of this complex. Windows are Grandt Line. I chose to use the blue trim color on the building corners here. 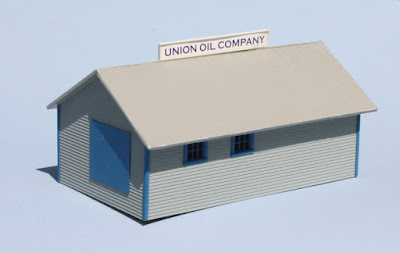 This warehouse is scaled to fit alongside the Chooch base, and the trim and windows pick up the same blue colors seen on the pump house and some barrels. The company sign on the roof was printed out in blue, and was framed with strip styrene. When the entire complex is put together, it looks like this, seen now from another angle. 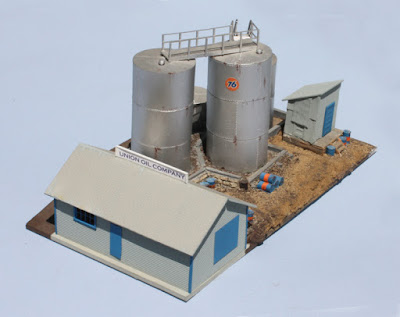 For a view of this dealership in a prior location on the layout, you can visit this post: http://modelingthesp.blogspot.com/2012/03/tank-car-placards-modeling.html .
On the layout, this small dealership looks fine, and in additional to the usual tank car unloading that is naturally associated with such a business, there is also a warehouse door at trackside for the unloading of drums of oils and lubricants, along with cartons of consumer products, particularly cans of motor oil, grease containers, and so on. This is thus an industry that accepts different kinds of freight car loads as well as being a typical small-town business.
Tony Thompson
Posted by Tony Thompson at 8:32 PM