Tony Koester, in addition to his duties writing a monthly column for Model Railroader entitled “Trains of Thought,” and editing Kalmbach’s annual Model Railroad Planning, also writes about a book a year for Kalmbach. These range over a variety of topics (Tony may even get to choose at least some of the topics), and most are interesting and well worth reading. But recently I came across one I didn’t even know about. It’s entitled Model Railroading from Prototype to Layout, and was published in 2010. I promptly bought it. 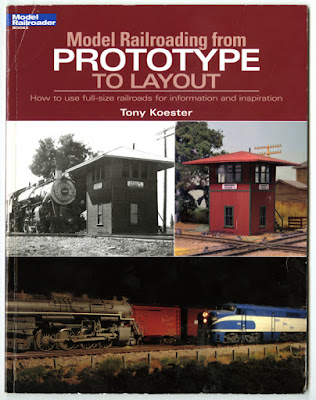 As you can see, this copy is a little shopworn and was the only remaining one in the bookstore at the California State Railroad Museum (I was there for a committee meeting). And as happens with Kalmbach often enough, it’s out of print from the publisher, though it can readily be found from used book dealers on line.
On the Capital Corridor train returning from Sacramento to Berkeley, I devoured a lot of the book, and since then have been enjoying rereading some parts of it more thoroughly, and taking time for the requisite amount of thought about the many points Tony makes in the book. I only get more impressed as I do so.
All of Tony’s books are interesting, because he has thought a lot about many issues in the hobby, and is a good writer who conveys clearly what his points are. Some of the wisdom in this particular book I recognize from some of Tony’s past clinics (more on that in a moment), but the biggest feature for me in this book is how much is brought together — prototype choices, layout choices, rolling stock choices, operations choices, and so on. It really is about the entire hobby, and as always with Kalmbach, beautifully illustrated.
The core idea promulgated in the book is the variety of ways to accomplish prototype modeling. Tony emphasizes, and states it more than once, that prototype modeling is much more than building accurate models of prototypes. Prototypical choices of layout locale and structures, as well as prototypical kinds of trains and train operation, along with consistency of era, are also important parts of the idea.
The book chapters suggest how wide-ranging the content is. The book has an Introduction and nine chapters. They are titled as follows: What is “prototype modeling?”, Choosiing a prototype to model, What time is it?, Structures and scenes that look the part, Putting the (iron) horse before the cart, Modeling jobs, Prototypical approach to layout design, Coping with space constraints, and Prototype modeling sampler.
The breadth of content is suggested by the chapter titles, but probably they can’t convey the depth. This is one of Tony’s strengths for me, the depth of thought that comes from so many years in the hobby, and from jobs like editing Railroad Model Craftsman, before becoming a Model Railroader columnist. And as I said, he conveys his thoughts clearly and convincingly. Not that I agree with every point, only that every one, for me at least, is definitely thought-provoking.
Even more than most of Tony’s books, and because of the sheer breadth of the subject matter here, this one could certainly be subtitled “the wit and wisdom of Tony Koester.” It’s an impressive and memorable book, and as you can tell, I like it and recommend it unreservedly. If you don’t already have a copy, it’s worth making the effort to find one, either on line or in a shop with slow sales (as I did). But get one.
Tony Thompson
Posted by Tony Thompson at 8:31 AM