For many years, there was no realistic way to model SP stock cars, short of scratchbuilding or extensive kitbashing. Then the Westerfield resin kits came along, with masters by Frank Hodina. Since Frank made those masters before anyone told him that “everyone knew” you simply couldn’t cast stock car sides in resin, he was unaware of the “impossibility” and made them anyway, and Al Westerfield produced kits from them. Those kits are time-consuming to build (and are still available), and were a landmark because at last there were accurate SP stock cars. Then, of course, as probably everyone knows, Red Caboose did one SP stock car class, S-40-5, in styrene. This post is mostly about those cars.
Below is a prototype photo of a car from Class S-40-5, taken at Dunsmuir in 1928, from the Shasta Division Archives. End lettering is so faded as to be almost invisible, though the car has been repainted since its construction in 1916. Trucks are Vulcan. 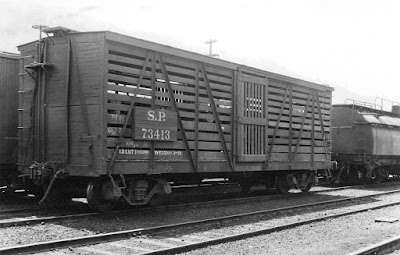 The Red Caboose cars are in large part beautifully rendered from the prototype. One reason they chose this particular car class is that there was a good drawing available. The entire class of over 900 cars (a large class as stock cars go) was built with Vulcan trucks. And here lies one of the issues with the Red Caboose model — most model cars were assembled with T-section trucks. Some later SP stock car classes did receive such trucks, but I know of no photo nor SP Freight Car Ledger entry showing an S-40-5 car with T-section trucks. So an early fix applied by many modelers (including me) with the Red Caboose model was to substitute Vulcan trucks. I have mostly used the Kadee No. 515 trucks for this, a sprung metal truck. Kadee has not yet released this truck in a HGC or High Gravity Compound version (which are better looking by far), so for the time being, the 515 truck is the one to use. I usually replace the Code 110 wheelsets with Code 88 wheels on my cars.
I should also mention that those who have attempted to operate the Red Caboose cars with their original trucks have had a lot of problems. These appear to stem from the fact that the trucks are designed to be equalizing, with the side frames able to rotate somewhat relative to the bolster around an axis parallel to the bolster long dimension, and in practice that rotation is insufficiently free. Trucks get cocked so all wheels don’t sit on the same plane, and that’s an automatic derailment waiting to happen. Two solutions have been tried that I know of: to try and free up the rotation part, or to give up on rotation and glue the truck parts into a rigid, single piece. I know one experienced and skilled modeler who tried both, and did not feel either one was successful. But others claim good results with the glue approach. As I mentioned above, though, I use a third solution: replace the trucks altogether. My current standard for car trucks is to discard all Red Caboose rotating trucks immediately.
Here is one example of a Red Caboose stock car I own, SP 73557, shown in a train on the layout. It has Kadee Vulcan trucks. 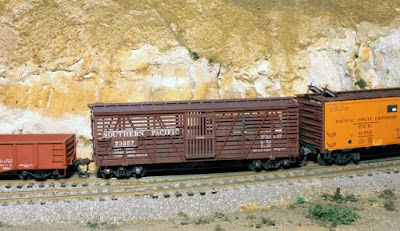 I have a single Northwestern Pacific stock car from the Red Caboose fleet; NWP only received 60 cars in Class S-40-5, but there is evidence that these cars roamed the SP throughout California, so it seemed all right to have one. It’s shown below next to an SP stock car, which has the very nice detail that Red Caboose included, the long letterboard from when the road name was spelled out (as in the photo just above). But the SP car shown below has not had its T-section trucks replaced yet, nor does it have a reweigh date, so it’s not quite ready for service. 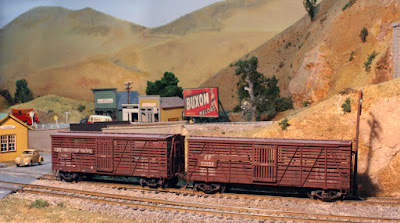 I also have a single Westerfield stock car in service, modeling Class S-40-8. Though that class had only half as many members as S-40-5, and the body was very similar to the -5 design, one difference is that there were open slats at the top of the ends. Ends on Class S-40-5 are entirely closed. The -8 class was built by Pullman, mostly in 1924, and was delivered with T-section trucks from American Steel Foundries (not Bettendorf). By the 1950s, though, photos as well as Car Ledgers show that some cars received replacement cast-steel trucks with U-section sideframes, and I modeled my car that way. 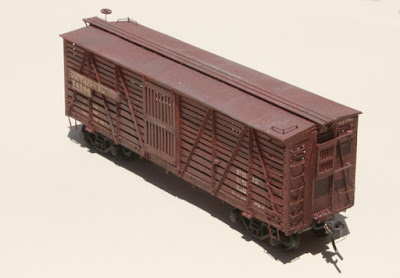 Since I have a stock pen at East Shumala on the layout (see, for example, http://modelingthesp.blogspot.com/2015/06/the-east-shumala-stock-pen-part-2.html ), I do need a few stock cars to come and go, and also one or two to be stored there. SP documents from the 1950s advise agents to store any empty stock cars, pending a request for them for loading, since there was a system-wide surplus of stock cars at the time. In most of my operating sessions there is indeed an empty stock car or two at the end of the stock siding.
Tony Thompson
Posted by Tony Thompson at 10:37 AM