In the previous post in this series ( http://modelingthesp.blogspot.com/2015/07/modeling-highway-trucks-part-3-more.html ), I showed some trailers I had modified, and in the present post I want to show more, along with a van truck. These are in addition to the earlier work.
I have received very helpful comments from a couple of modelers who are far more knowledgeable about semi-trailers and trucking than I am. One point made is that the Athearn 24-foot trailer is undersize (too narrow and a little too short in height), probably made that way so it would fit onto the Athearn flat car and operate on a range of model layouts. It is also awfully plain and far from typical of many 1950s trailers. One approach to easy but effective modifications to these trailers can be found in Art Curren’s article in Model Railroader (November 1990), pages 120 and 121. Though not about superdetailing at all, Curren shows simple ways to get different trailer appearances.
One can also be critical of the Ulrich van trailer as being rather simplified, especially with its totally smooth sides. Since I am mostly trying to get broadly realistic tractor-trailers on my layout roads, this isn’t vital to me, but I do realize that truck parts like correct mirrors, air-line connections, landing gear and other details can certainly be added to make a more detailed and more accurate vehicle. I will concentrate on tractors in subsequent posts.
Those concerns aside, I proceeded to make up a few more trailers from both Athearn and Ulrich. As I have pointed out in previous posts, I find the many prototype photos at Hank’s Truck Pictures very helpful (see: http://www.hankstruckpictures.com ). Though many of the older photos are black-and-white, they do at least permit finding out if a company’s trailers were white or silver, by far the commonest colors in the 1950s. And again, I have depended greatly on the decorations available from Graphics on Demand (you can visit them at: http://store.graphicsdemand.com/ ), with Ken Goudy’s extensive prototype research behind these graphics.
One truck type I wanted on the layout was beer delivery trucks. Graphics on Demand has a number of 1950s regional beer truck graphics. One I chose was Acme, and applied that graphic to one of the Athearn trailers. The tractor is a Classic Metal Works (CMW) 1941–46 Chevrolet, shown on Nipomo Street in my layout town of Ballard. 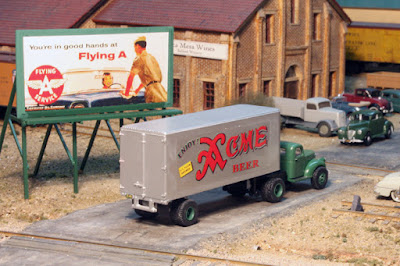 Acme Beer has an interesting history (there is a fine summary at this link: http://brewerygems.com/acme.htm ) and as a San Francisco company fits well into my Central California modeling location. In 1935 they had added a brewery in southern California (Vernon) and continued operating both the San Francisco and Vernon breweries until 1954, when the plants were sold to Liebmann Brewing of New York (Rheingold Beer). Liebmann sold the Vernon plant to Hamm’s in 1957, and closed the San Francisco brewery in 1958.
One of the trucking companies I wanted to include was California Motor Express, or CME. Luckily Graphics on Demand carries their earlier decoration, before they went to a graphic that looks like a truck. Here is that trailer behind another CMW tractor, on Bromela Road in Ballard. 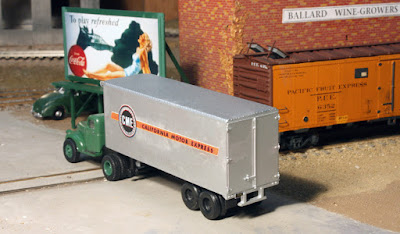 And yes, in both the foregoing photos you can see my interchangeable billboards in action. For more on that idea, you can read this post: http://modelingthesp.blogspot.com/2015/04/interchangeable-billboards.html .
I have also been working with a couple of Ulrich metal trailers, 32 feet long, to add some of these kinds of graphics. In the next photo, you see a trailer decorated for Oregon Nevada California Fast Freight, pulled by an Ulrich Kenworth tractor. It's shown on Pismo Dunes Road on my layout at Shumala. (You can click to enlarge.)

The tractor does lack side mirrors at this point.
I have shown previously a delivery truck for my wholesale grocer, Peerless Foods (it’s shown in this blog: http://modelingthesp.blogspot.com/2015/07/modeling-highway-trucks-part-1-box.html ).  Since a number of the grocery items handled by Peerless are refrigerated, I wanted to add a refrigerated truck also, and used the CMW Chevy van of this type. I simply added a Peerless sign to one side, as you see here, on Bromela Road, with the Union Oil dealer at right, 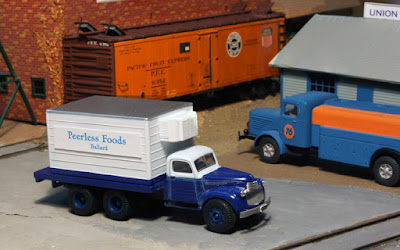 Another truck I wanted to have is a Bekins trailer. My uncle Joe worked for Bekins for years, and in addition to their moving-van type trailers (often with lowered floors), they had conventional trailers too. My model is the Ulrich trailer and Kenworth tractor. Here again, the decoration is from Graphics on Demand, shown on Pismo Dunes Road. 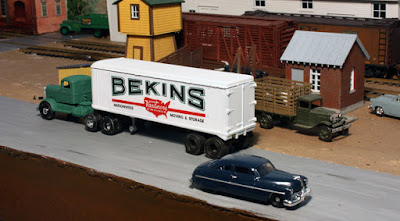 These additional trucks have added to the variety on my layout, and I have been happy to be able to represent some Western trucking concerns as part of this project. I have a few more to do, which I’ll report one of these days.
Tony Thompson
Posted by Tony Thompson at 10:42 AM

Email ThisBlogThis!Share to TwitterShare to FacebookShare to Pinterest
Labels: My layout, Vehicles