In Part 1 of this series about models of highway trucks (it is available at: http://modelingthesp.blogspot.com/2015/07/modeling-highway-trucks-part-1-box.html ), I discussed a few models of van or box trucks. In this post, I want to talk about semi-trailers.
The first issue for a modeler of semi-trailers is era. In the 1950s, when I model, the length of tractor-trailer combinations (not trailers alone, as is the case today) was regulated, but separately by each state. Western states tended to permit longer vehicles and also heavier ones. One result of limitations on total vehicle length was the development of the cab-over-engine or COE tractor, which minimized tractor length, thus permitting longer trailers. The common trailer length in my modeling year of 1953 was 32 to 35 feet, though both longer and shorter trailers were in use. There is a wealth of historical information on the Internet about this topic, and I would encourage interested modelers to explore there.
In HO scale, the extensively produced Ulrich metal semi-trailers and tractors have long been liked by modelers. They were also produced for awhile by Walthers, and accordingly are very commonly available used, at swap meets or on-line sales such as eBay. This cast white-metal trailer is 32 feet long. Ulrich made both Kenworth conventional tractors, and a Mack COE tractor, along with other trailers, including a tank trailer and a stake-bed trailer. And by attaching the Kenworth cab to a dump body, and adding a dump trailer, they made a familiar type of gravel carrier,
I will illustrate one of the kinds of used Ulrich models you can find with this photo, lettered for what I believe to be an imaginary circus. 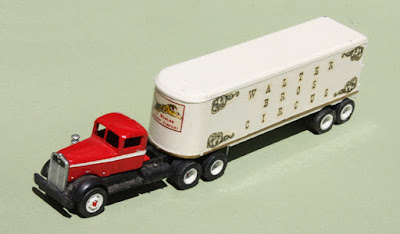 The Kenworth tractor is missing its exhaust stack, but that is easily replaced with tubing. Likewise the missing mud flaps on the trailer are easy to add with sheet material of several kinds. Since I’m not modeling any aspect of the circus world, I stripped the trailer paint, then repainted it flat white.

A word on colors and paint schemes. There are lots of period photographs on the Web of historic semi-trailers, though in black-and-white photos it can be hard to discern colors. Many trailers in the early 1950s were lettered over natural aluminum, though many others had a base color of white or other colors. Some trucking companies apparently operated both white and silver trailers together. One of the excellent sources of photos, which I’ve used extensively, is Hank’s Truck Pictures (at: http://www.hankstruckpictures.com ). This site is organized according to trucking companies, a very helpful arrangement.
An excellent source of lettering for trucks, for eras ranging from the 1940s to today, is Graphics on Demand, in Wenatchee, Washington. They are not water-slide decals, but are very thin adhesive vinyl sheets, which work fine. Applying them is a little like a dry tranfer, with the same kind of burnishing process. You can see their extensive HO scale line at the following web link: http://store.graphicsdemand.com/ . I have purchased a couple of batches of graphics (mostly from their “Motor Carriers” section), and am very pleased with the prompt service and fine product.
Here is the former circus trailer, as redecorated, with the same Kenworth tractor.

This scheme for West Coast Fast Freight can be documented at Hank’s Pictures (link to: http://www.hankstruckpictures.com/kg_wcff.htm ).
Just for a comparison, I wanted to decorate one of the fine Classic Metal Works or CMW 32-foot Aerovan trailers. These have a side door, as was common in the 1950s for delivery service. The trailer does have a prominent pair of ridges down each side, which I thought could interfere with the addition of graphics, so I tried removing them on one trailer. I simply used an X-Acto chisel blade.

The removed ridges show as gray stripes in the photo above. I touched them up with Old Silver, which made a good match in tone, though somewhat brighter a silver color than the CMW paint.
I lettered one side for Los Angeles – Seattle Motor Express, a company which operated up and down the West Coast before being purchased in 1959 by National. The other side, with the delivery door, I lettered for Lucky Lager beer, which by the late 1950s was the best-selling beer in the West. This is all Graphics on Demand lettering. The tractor is the CMW 1941–46 Chevrolet, and its LASME door emblem is from the same Graphics on Demand set as the trailer lettering.

Joining these two trailers is a Pacific Motor Trucking scheme, custom painted by Jim Elliot on a Tyco ribbed trailer and an International R-190 tractor made by CMW. Jim used the Microscale PMT decal set for this vehicle. 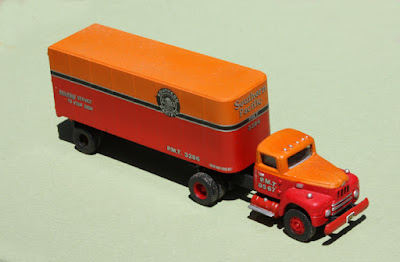 With these trailers completed, I can put them on the layout, and can in some cases mix and match with some existing tractors I have. In a future post, I will show more trailer development, along with some comments on tractors.
Tony Thompson
Posted by Tony Thompson at 9:31 AM