This past weekend, I hosted two operating sessions, one on Saturday, one on Sunday. These were invitational (from a list of acquaintances and fellow operators), and of course, fun is really the first goal of such a session, both for me in making it happen, and hopefully for participants in doing it. But I did have additional things that I wanted to come out of the sessions: primarily further testing of layout changes and improvements, as well as exercising my operating scheme and waybills. I should emphasize that these goals were secondary, but I did have them in the back of my mind. And last but not least, I wanted to repay some of those whose layouts I’ve had the pleasure of operating on in the past
As seems to work on my smallish layout, I assign two crews of two each, one to start switching at Shumala, the other at Ballard on the opposite side of the layout, and when each each crew is done, they will have made up a train to go to the other side. When those two trains run, the two crews can exchange sides to switch out the cars that have just arrived at the new destination.
On Saturday, the crew which began at Ballard was Jim Providenza and Paul Weiss, both of whom are certainly operating experts as well as experts at layout maintenance — the latter point leading to suggestions on their part about solutions to some of my glitches. In the photo below, you see Jim (foreground) holding the throttle because he’s engineer on the local, but looking ahead to see where the next car pickup is, while in the background Paul, who was conductor here, appears to be nudging a stalled locomotive. 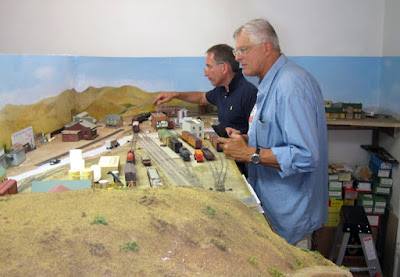 On the Shumala side, meanwhile, Clifton Linton and Lisa Gorrell were at work. As you can see, Cliff has the paperwork and is planning switch moves (he made good use of switch lists to organize the job), and Lisa is engineer of the diesel switcher. 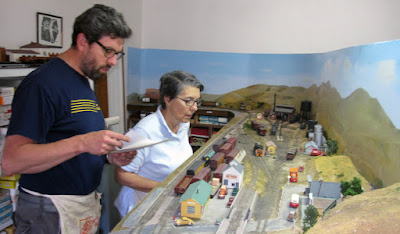 Most everything went well. The waybill scheme was effective and there were only a couple of cars which acted up during operation (all were pulled off for maintenance). Locomotives worked well, but we had some electrically balky turnouts, only some of which we could diagnose. It is always baffling when a turnout which worked fine in the morning when I made one last pass over the trackage, starts acting up in the afternoon when guests arrive. (Yes, I know, there’s a well-known adage that “guests cause sleeping gremlins to wake up,” and my experience obviously provides more data in support of that saying.) Just one of those things.
But  it was well worth the experience to get expert advice, especially from people like Jim and Paul, both of whom have torn out track on their own layouts at times, to rebuild and make it better.
For simplicity, I’ve only shown the Saturday crew, though I re-staged overnight and a different crew operated much the same session on Sunday. Once again, I got good advice on trackwork maintenance from experienced layout owners who were there, as well as helpful comments on the operation scheme. So in addition to the fun of putting the layout to work, both days I identified  problems as well as solutions on the layout.
In a way, I was a little discouraged that we did find problems, which I hadn’t found in advance, but as Jim Providenza reminded me, the layout in its present form has been operated in a formal way relatively few times, and as he put it, “remember, it’s still early days.” So I have some fixes to implement, and next operating session, at least some of the demons will be exorcised. And not to forget, we will continue to have fun doing all the switching. That part worked just fine.
Tony Thompson
Posted by Tony Thompson at 10:04 AM