I have shown a number of parts of the construction of my layout town of Santa Rosalia, the end of my SP branch line. You can readily search for them using the search box directly to the right (this page), and the term “Santa Rosalia.” The last time I showed the under-construction status was in this post (link: http://modelingthesp.blogspot.com/2014/07/constructing-santa-rosalia-waters-edge.html ), in which I showed the the corner of the room, into which the branch extends. Here is that photo, repeated. Right in the corner is my future harbor area. 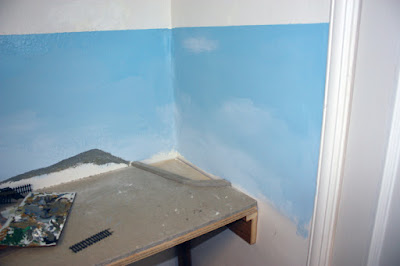 You can see that there is some space at the right edge of the layout as shown here, reaching to the edge of the doorway. I decided to use that space. First step was to glue a splice plate underneath the existing plywood track board. 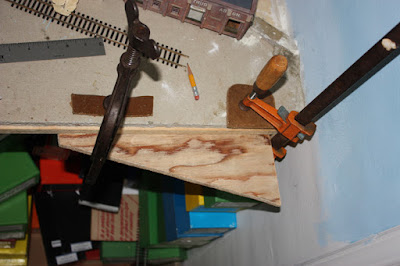 With that done, I experimented with newsprint to make a suitable shape of the new layout addition. Below is the final paper pattern, lying atop the 5/8-inch plywood sheet from which I would cut out this piece. You can see at right the pencil outline of the pattern that was traced on the plywood. 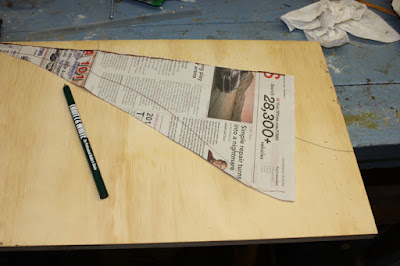 Once this plywood piece was cut out, the next step was to glue it atop the splice plate attached earlier. As before, I used yellow carpenter’s glue. You can see how the structure now fills all the space over to the doorway. 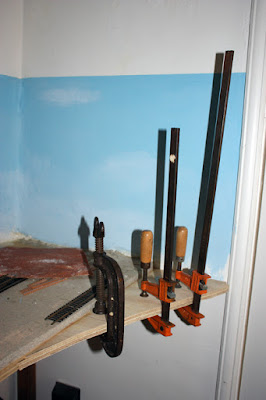 With the plywood base installed, I used the same paper pattern to cut a piece of 1/2-inch Homasote to match. As always with Homasote, I used a Utility knife for this. Cutting Homasote with any kind of saw is a good way to generate lots of fluffy dust, but otherwise undesirable. Here is the result. 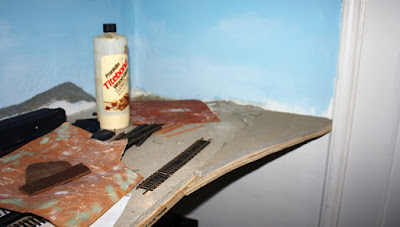 As things have progressed with the Santa Rosalia harbor area, and with other aspects of development, such as the cannery and the depot (see for example the post at: http://modelingthesp.blogspot.com/2015/05/sp-depot-santa-rosalia-part-4.html ), I’ve completed painting the area with my favorite “ground” color, Rust-Oleum “Nutmeg,” and currently it looks like the photo below. Against the wall are the fish cannery and (at left) Pismo Marine Services (these two buildings, both kitbashed, were described previously at: http://modelingthesp.blogspot.com/2015/05/kitbashing-santa-rosalia-cannery.html ). The Common Standard no. 22 depot (an American Model Builders kit) is in the center. The house track curves behind the depot.

The white Xerox copy in the foreground is the plan of the Peco three-way switch that will be placed there.
Track laying is progressing in Santa Rosalia (see a prior news item on this: http://modelingthesp.blogspot.com/2015/05/flash-tracklayers-enter-santa-rosalia.html ), and the placement of roads, additional industrial buildings, and scenery will be happening soon.
Tony Thompson
Posted by Tony Thompson at 9:57 AM