Back in 2012, I posted a series of descriptions of how I was dealing with electrical problems that were emerging on my layout (beginning with this one: http://modelingthesp.blogspot.com/2012/09/electrical-wars.html ). More recently a new problem surfaced with one of my Shinohara turnouts at Shumala: from time to time it caused a dead short when set normal, but only on a few occasions. The rest of the time it was fine. I have trouble-shot this thing enough times to have walked to Seattle, but simply could not find why this short occurred, and probably it only occurred about a fifth of the time or less. Solution? Rip it out and put in another one. I should emphasize that this isn't really a criticism of Shinohara turnouts — this turnout has been in place, and in use, for more than 30 years, and the problem has only appeared in the last few months.
After pulling up the turnout, I used a putty knife to remove most ballast, then sanded down the roadbed to allow the new switch to sit flat. I had to take a deep breath before starting; this turnout is the entry to all of Shumala on my layout! While it was missing, there would be no switching for this town. Here is a view of the area (you can click on the image to enlarge it): 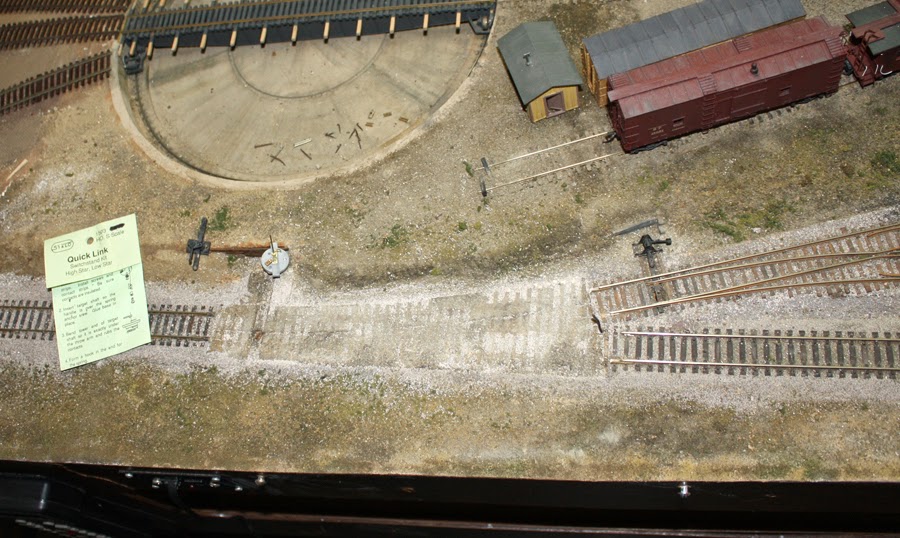 Just at the throwbar location is a Star switch stand, and its green packaging at far left. Note between the two is the old Caboose Industries “high-level” throw (model 204S), which I wanted to replace with the Star throw. I should hasten to say that the 204S has functioned flawlessly for over 30 years, but it is the only such throw on the layout. I would like to cut down on the variations in equipment.
One part of that previous series of electrical posts presented some of my views about hand throws for switches (you can read that post at this link: http://modelingthesp.blogspot.com/2012/09/electrical-wars-part-3-hand-throws.html ). As I mentioned in that post, I am steadily replacing the old Caboose Industries 202S ground throws with what I think is much better, the Bitter Creek B-4001 throw. I finally decided I was better off to install the Bitter Creek throw at this location than the Star, just for consistency elsewhere (there are half a dozen Bitter Creek throws already at Ballard, and more planned as replacements for Caboose Industries 202S installations).
With the new Shinohara switch in place, here is how it looked. And once properly gapped and fed, it functioned correctly electrically — what a relief! 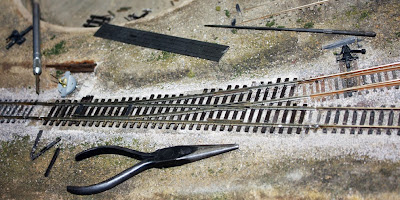 With the trackage aligned, I installed the Bitter Creek ground throw. You can see it below at the switch throwbar, and it’s evident how much less obtrusive it is than, say, a Caboose Industries throw. In the background is one of my Southern Pacific C-10 Consolidations on the turntable. 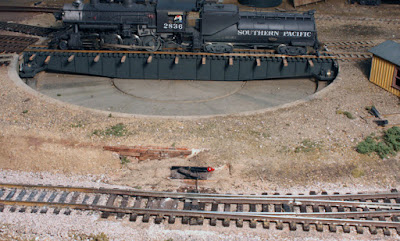 The Bitter Creek mechanism itself is small, and though it is supplied painted black, I usually paint it a medium to dark brown, as you can see here. This blends in even better than black. At this point, soil has been added in the area, but no vegetation as yet. 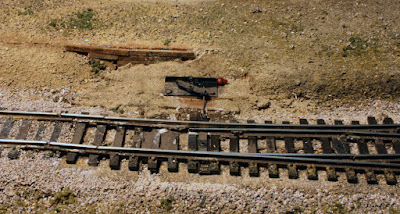 Once the switch was functioning well mechanically and electrically, I could continue to scenic around the ground throw and ballast the track. The current appearance is like this. 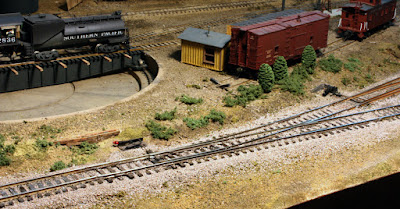 Toward the right you can see a Caboose Industries ground throw (a better view is in the second photo from the top of this post), which can be compared to the Bitter Creek throw at lower left. The Shumala caboose track is at upper right, with a Westerfield “temporary” box car caboose at the end of the track nearer the camera.
As I mentioned, I really took a deep breath before tearing out a switch in this location, but it was worth it to solve the electrical problem with the old switch (whatever it was). And since this switch is the portal to most of Shumala’s trackage, I had plenty of motivation to move along smartly on the project. I’m glad I did it.
Tony Thompson
Posted by Tony Thompson at 10:11 AM