Although the freight movement we want to depict on a model railroad is mostly via railcars, it is still the case that our model roads and highways should contain highway trucks. I have approached these truck models in a couple of ways, and thought it might be useful to describe a bit of what I am doing.
One category of model trucks would be delivery trucks. These are normally what the industry calls “straight trucks,” “box trucks,” or “van trucks,” of a range of sizes. These have been available over the years in many forms (Varney did them back in the early 1950s, and in that era and ever since, many manufacturers have offered these vehicles). Among the fine truck bodies of this type have been the recent Athearn van trucks. I like to choose familiar national or regional company names for such vehicles. Here is a Bekins-lettered Athearn box truck, on Bromela Road in Ballard on my layout.

In recent times, the excellent HO scale vehicles from Classic Metal Works or CMW (“Mini Metals”) have provided still more variations, including what for me is most useful, versions of the 1941–1946 Chevrolet truck. Here is their van truck, lettered for the wholesale grocer on my layout at Ballard, Peerless Foods, but shown here on Pismo Dunes Road in East Shumala. This was modeled by just adding a sign to the side of the stock truck, but it ties into an on-line industry. (You can click to enlarge.) 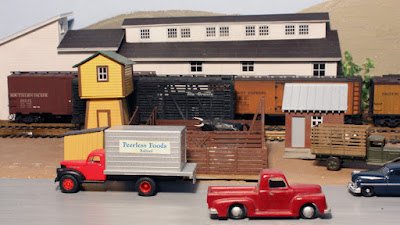 Another example, from the CMW line of ’41–46 Chevrolets, is the tank truck, one of which I have decorated for Associated Oil, using the “Flying A” logo. This truck would of course be occupied in making deliveries from my rail-served Associated dealership in Shumala, another on-line industry. It’s seen here on Nipomo Street in Ballard on my layout. 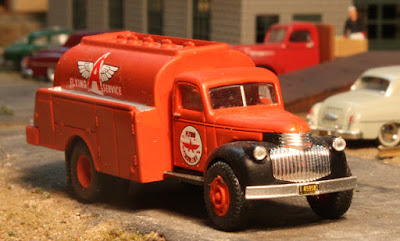 This truck, of course, has a correct “commercial” California license plate for 1953. I discussed this and other California vehicle plates in a prior post (see it at: http://modelingthesp.blogspot.com/2012/12/vehicle-license-plates-trucks.html ), along with a broader discussion of automobile plates (you can read that post at: http://modelingthesp.blogspot.com/2012/11/vehicle-license-plates-in-ho-scale.html ). More on this topic will be appearing in the forthcoming August issue of Model Railroad Hobbyist or MRH, available free for on-line download.
Lastly, I should mention SP’s own subsidiary, Pacific Motor Trucking or PMT, with its trucks painted in unmistakeable Daylight colors. This particular model was painted by Jim Elliott, and it can often be found at the depots on my layout, making pickups or deliveries. It’s another CMW truck, this one a White Model 3000 cab-over, a model introduced by White in 1948. It is shown on Chamisal Road in Shumala.

The larger highway trucks, almost always semi-trailers, are also quite interesting, and I will address them in a future post.
Tony Thompson
Posted by Tony Thompson at 7:38 AM