In the previous post in this series, I showed both a prototype photo, and a model under construction, for an insulated, pressurized tank car (ICC 105) for Brea Chemicals of Los Angeles. (You can find that post at this link: http://modelingthesp.blogspot.com/2015/06/more-on-tank-car-dome-platforms-part-3.html .) One part of the project, which ties it to previous modifications I have reported for the Athearn “chemical” tank car, was the use of part of the Atlas platform part, their no. 9170013, to make the walkway alongside the valve bonnet (not an expansion dome, but nevertheless sometimes called a dome).
At the point I stopped my modeling description in the previous post (link provided above), the bonnet and walkways had been added and primed. Now I needed to add ladders which reached all the way to the upper walks, not merely to the level of the tank handrail, as Athearn provides. Luckily in some recent Athearn “chemical” tank cars, the full-height ladders are included, so I harvested a pair of them for use on this model. They are stamped metal. I simply re-bent them slightly to reach my walkways. In the original white color, they can be seen clearly. 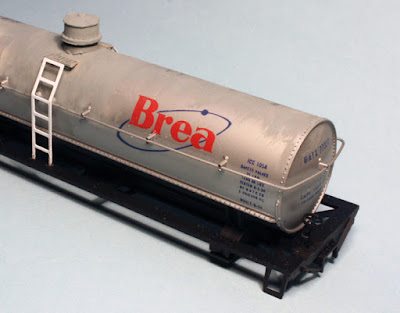 But as was evident in the prototype photo in the previous post (link given above), the tank handrails and ladders were black on the Brea cars, though the walkway was the same silver or silver-gray as the rest of the tank. I handpainted the model that way, as you see here. 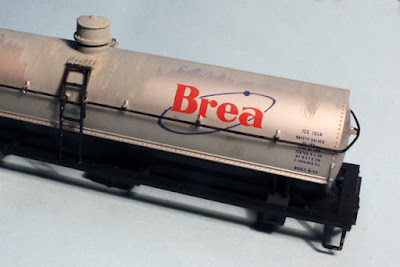 With trucks attached (semi-scale-tread width wheelsets added) and Kadee #158 couplers installed, the model was ready to weather. I wanted to do this in two steps. First, I oversprayed with Dullcote, and weathered the entire car with my usual acrylic tube paints, in wash form; for more on that, you can look at my Reference Pages on weathering, linked through the list at upper right of the blog page. This turned out pretty well. Here’s the car being switched at Shumala at this point.

The second process I wanted to try was something I had watched Richard Hendrickson do, but had not tried myself. The idea is to mix a really dilute dirty black in plenty of solvent, so that airbrushing this mix from above the model just shadows the top surfaces. Let it dry a few seconds, and decide whether it needs another pass; repeat until satisfied. This technique makes a really nice representation of that “dirt from above” look, getting that area dirtier than the sides. This is especially effective on light-colored cars like this tank car. But my photos do not differ much from what is shown above, so for now I will leave the Brea tank behind. If I have a car which shows the “dirt from above” look well, I will post it later.
Tony Thompson
Posted by Tony Thompson at 8:23 AM