My first post on this topic gave some general information about the goals of this part of the layout, and something about the approach I am taking to modeling a small area of waterfront at Santa Rosalia (you can read it at: http://modelingthesp.blogspot.com/2014/07/constructing-santa-rosalia-waters-edge.html ). In the present post, I describe work on creating the water area alongside my sea wall.
First, the sea wall needed to be blended with the surrounding layout surface. I used Sculptamold for most of this, refined with taxidermists’ paper mache (Brandt’s). Second, I formed a fillet at the interface between the vertical wall of the room, and the horizontal surface where the water will be. This follows the approach I explained in an earlier post (you can read it at: http://modelingthesp.blogspot.com/2015/02/that-layout-backdrop-interface.html ). Once the fillets were sanded smooth, I coated the flat bottom of the water area with shellac. I like this finish for sealing wood surfaces. In its initial state, then, here is that area with fillets built: 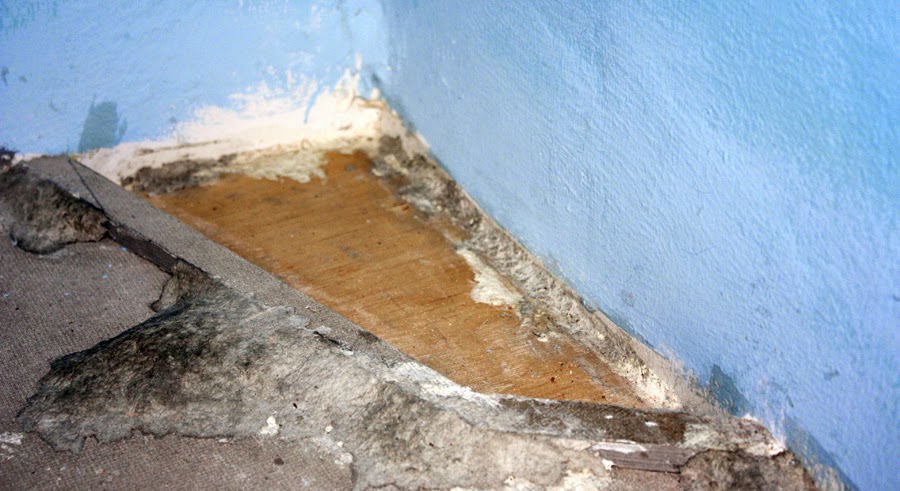 Around the seawall area, you can see the approaching slope on the left, built up with paper mache of my two kinds.
My next step was to prepare the seawall edges. As I showed in the previous post (link provided at the top of this post), Frenchman River Model Works sells a set of very nice resin castings of rows of pilings, their part no. 1573. One package of these contains three pieces, each 4-7/8 inches long, enough for my entire water’s edge. I did have to shorten the height of the pilings by 1/8 inch from the bottom of each piece to fit the height of the seawall I had built. I simply sawed this amount off with a razor saw. The piling sections were primed with a light gray.
I also decided to represent the wharf along the seawall as wood planking, and used Evergreen no. 4100 V-groove sheet (this material has 0.100-inch spacing, which represents about 9-inch planks). I distressed the Evergreen pieces using a scriber, then used very coarse garnet paper to roughen the surface.

Here you can see the styrene “planking” merely laid in place — it still needs to be detailed and painted. By the way, at the rear you can see how the vertical room corner is coved.
I now added heavy timbers along the edge of the dock pieces you see above, on which to mount mooring cleats, bitts, etc. These timbers were made using Evergreen styrene strip, 6 x 10 scale inches. These too were gently roughened with coarse garnet paper. Then I added styrene NBW castings to the edge planks, taken from an old Kemtron set, X-198. Next I primed these strips with the same light gray color as the pilings.
The color I wanted to try on these pilings and wharf is a Star Brand color, “Seasoned Brown Wood” (STR-11), which has a very realistic look, though fairly dark. The color can go directly onto another piece of the scene, a short Central Valley stairway (taken from CV set 1602, “Steps and Ladders”), leading up from vehicle parking onto the dockside. Once painted, these were weathered with acrylic washes to lighten the color somewhat and add some gray.
Here is how one of the piling sections looked, with the tops toward the camera. Note the slight irregularity in height and spacing of the individual piles. I think this is a really nice product.

But before installing all this dock detailing, I needed to paint the “water” surface a suitable color, and deal with the sky-water interface, along with the lower edge of the sky on the bounding walls. My idea for the sky was to depict the familiar marine layer of cloud, so common on this coast, as though it might be lying some ways offshore. Adding a fog bank this way also would help avoid the problem of depicting the distant sea surface.
For water, I used a light green, with lots of Neutral Gray, as seawater typically looks inshore. Once colored to my satisfaction, I can use Gloss Medium to give it a shiny water surface. One advantage to this method of representing water is that it can be cleaned with a damp cloth and, if necessary, recoated easily. My experience with modeled water made with cast clear resin has been that maintaining it is not so convenient.
For my fog bank, I used primarily Titanium White acrylic tube paint, with a little Neutral Gray, to create the look of the marine cloud layers that we often see in the Bay Area this time of year and traditionally call “fog” even when it is in the form of overhead clouds. Here is how it looked at this point:

Once I have the Gloss Medium on the water, I can install all my dock pieces and continue with scenery treatment on the shore side. I will describe those steps in a future post.
Tony Thompson
Posted by Tony Thompson at 11:18 AM