I have described in previous posts the idea of “overlay” or partial waybills, which permit different loads to be assigned to a particular car without a new waybill. You can read the original post’s discussion on that idea at this link: http://modelingthesp.blogspot.com/2011/08/waybills-10.html . I developed the idea further for use with Empty Car Bills, which adds further flexibility to car handling and movement, in a subsequent post, which is here: http://modelingthesp.blogspot.com/2012/02/waybills-19-confiscation.html . I have also called these “short” bills in some posts, if you want to use the search box to find further discussion.
If these ideas have been previously described, why am I bringing them up again? The main reason is that until recently, I had not seriously implemented these ideas for my own layout. The examples in the posts cited above are for Otis McGee’s layout, which differs in having largely bridge traffic and relatively little on-line industrial switching. I wanted to see how well they would work on my own layout, which is entirely dominated by switching.
The basic idea, for me or for Otis, is simple, but it has some subtle points, along with some obvious things to watch. Since the idea is to use a full waybill as backing, and that waybill shows the originating railroad along with car initials and number, the overlay bill works much the best for loads originating on the home railroad of the layout, in my case Southern Pacific. Moreover, it should be obvious that this idea can only be applied to free-running cars like box cars, or to cars which always have the same purpose, like refrigerator cars. Here is an example. This way, a particular car does not always head off to the same destination; and when there are multiple refrigerated shippers in one town, as in my layout location of Ballard, a particular car will not even always be sent to the same shipper. 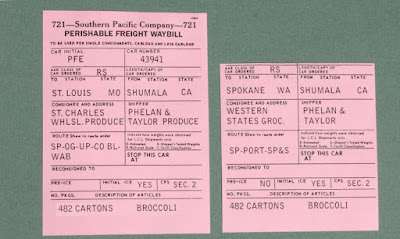 The same can obviously apply to box cars, as in these two outbound loads from Pacific Chemical Repackaging in Ballard: 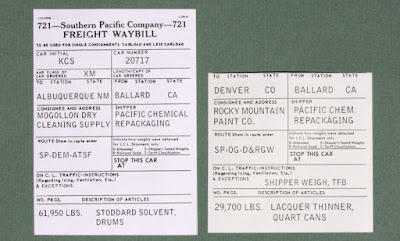 And here again, the empty box car arriving in Ballard can be directed to any industry which loads such cars outbound.
This same idea can work for other free-running cars like gondolas and flat cars, though I don’t have much in the way of industries shipping in those cars. Lastly, if there is more than one originating industry on an off-line railroad (the Northern Pacific, let’s say) for a particular car type like box cars, this method can even work (in my case) for non-SP waybills. Here’s an example from the Pennsylvania Railroad, of box cars headed to two different Ballard industries: 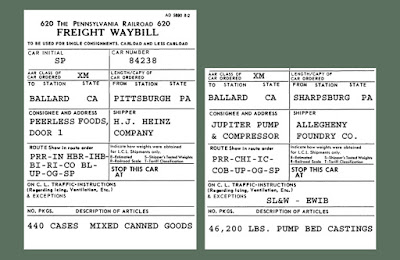 This enables a particular car to take different inbound jobs as well as different outbound jobs, a helpful way to avoid the same problem mentioned above, the same car always with the same load or job. And it may be obvious, but in case it isn’t, let me say that numbers of these “overlay” bills can be made up for a single shipper, representing multiple shipment options. All four of my packing houses have ten or so overlay bills each. And of course I have lots of PFE and other reefer waybills with which these overlays can be paired.
Incidentally, let me make the further point in passing, that many modelers, devising a waybill inbound to an SP location from the PRR, would automatically choose a PRR box car, or an eastern box car. In fact, under car service rules, the PRR yardmaster would be attempting to find SP or at least Western railroads for his load to California. Of course eastern or PRR cars might get this load, too, but not every time.
These ideas clearly are not practical for foreign railroads which aren’t very big shippers to my layout area, or don’t load all the same kinds of cars, nor of course can they work for specially equipped cars in most cases. But they do work for some large groups of cars, as I showed above. I am happy to see them working on my Santa Rosalia Branch layout.
Tony Thompson
Posted by Tony Thompson at 8:34 AM