In Part 1 of this thread, I talked about stock pens in a general way, and provided some citations to sources of information about the livestock business. I also said a little about the starting point for my stock facility, the old Associated Hobby (AHM) kit. You can read that previous post at this link: http://modelingthesp.blogspot.com/2015/03/a-stock-pen-for-east-shumala.html .
As I stated in the first post, I wanted to expand the size of the facility by adding another pen, which meant building some additional fencing. I also needed to correct the failure of some kit parts to have horizontal boards on both sides, which the prototype did for any fencing which had animal movement on both sides. As part of the facility, I also wanted to provide a water supply and an office.
The fencing part of the problem is fairly easy. Using Evergreen styrene, I added horizontal boards of scale 2 x 8-inch strip, and posts of scale 4 x 4-inch strip. Here, from top to bottom, are an unmodified original AHM piece (top), two of the new fencing units (middle), and an AHM section with doubled side boards added (bottom).

Once all fence modifications or new construction was complete, both sides of all parts were airbrushed with Star Brand “Seasoned Brown Wood” color, STR-11.
The AHM kit included a “ground”piece to which fences and buildings could be attached. I began by painting it with a mixture of acrylic tube paints, Raw Umber and Yellow Ochre. Then I assembled the fencing to the base by following slots in the base, and gluing my fence segments into the slots.
With this part of the job completed, I decided to see how it looks on the layout, even though my expansion section wasn’t finished yet. Here is a photo. 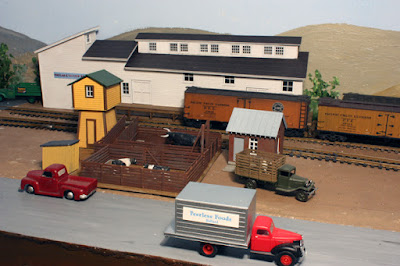 That’s the Phelan & Taylor packing house in the background, and Pismo Dunes Road in the foreground.
In the photo above, you see additional structures, in addition to the kit fences. Accessory buildings include the water tank, which was probably no longer water-filled once town water was available, modeled as a familiar California structure, a tankhouse. In two previous posts, I described the background and modeling of these structures, starting with this link: http://modelingthesp.blogspot.com/2015/04/building-california-tankhouse.html . After that introductory post, I completed the modeling, at: http://modelingthesp.blogspot.com/2015/05/building-california-tankhouse-part-2.html .

Also visible in the photo above, at the right of the pens, is an office, a small brick structure left over from another kit. It is about the right size, but does not seem to me to look right as a small office for this stock facility. I would expect such an office to be a simple frame building, and one with a lesser roof pitch, so will have to put together such a structure. This is of course quite easy with styrene sheet and commercial windows. I will show it in the following post.
I have also started work on my expansion pen, which will be located at the right of the kit pens as seen in the photo above. I began with a piece of 0.040-inch thick styrene about the same size as the kit base, and added a water trough to match those in the AHM kit. This additional base piece will support the added fencing for the third (expansion) pen. The new base was painted with the same acrylic colors, then fencing was applied. I will continue with this model in a future post.
Tony Thompson