I have posted a description of my efforts to create a properly sized platform on an Athearn high-pressure tank car, surrounding the valve bonnet (it is sometimes called a “dome” but is not an expansion dome). That post can be found at: http://modelingthesp.blogspot.com/2015/05/another-approach-to-tank-car-platforms.html . My changes used an Atlas tank car part. In this post, I show another way to improve an Athearn “chemical” tank car, also using the same Atlas part.
The part is Atlas no. 9170013, and to repeat a photo from the previous post, looks like this.

In the previous post, I used the leftmost part of this molding (the entire left handrail  plus the space between the two handrails), and mated it with the same part of a second molding (reversed) to make a full platform with handrails. (If this description is confusing, please see the post cited at the top of this post, as it shows the process.) What was left over was the righthand side of the Atlas part in the photo above (that is, the entire handrail section at right). I use the grid walkway part of that section in the present post as raw material for a “dome” walk.
But before I begin with the modeling, let me show what prototype I am aiming at. It is a General American car leased to Brea Chemicals, which was part of the Chemicals Division of Union Oil Company, with a plant manufacturing ammonia and other fertilizer constituents. The plant was at Brea, California, thus the name. This photo is from Richard Hendrickson’s collection, but I don’t know photographer, date, or location.

Note that the car has only a short walkway alongside the valve bonnet (a photo of a different Brea car shows a longer walkway), and has a ladder reaching all the way up to the walkway. It’s possible that the ladder was only on this side, but by the time this car was built in 1948, the usual practice was to have ladders and walks on both sides. It’s evident that the tank handrail and ladder are painted black.
Here is an Athearn kit (custom decorated) that I have had for some time, with the bonnet sawn off and the site filed flat, some paint touch-up, and addition of the bottom part of the Frank Hodina bonnet (see prior post). Also visible are two pieces of white styrene, which are pieces of scale 4 x 4-inch strip, cut in half the long way, diagonally (making a triangular cross-section), then glued down on the wide side, so that the upper surface of the strip is close to horizontal.

The purpose of these little white pieces is to support the walkways which go alongside the bonnet.
The two walkways are cut from the unused part of the Atlas platform shown at the top of this post. Here they are, applied atop those styrene strips, and with the Hodina bonnet completed. 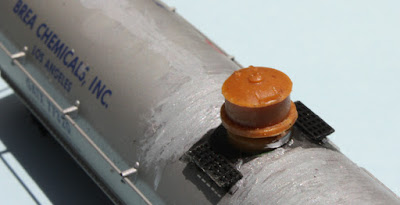 During the work shown above, I was also fixing the Athearn underframe, in the way that I normally do. Removing the three sets of bottom outlet details, drilling the coupler pocket post and cover so they could be tapped 2-56, then cutting off the pocket covers so they become separate pieces, are all essential here. Also, the vertical-wheel handbrake arrangement furnished by Athearn, a rare prototype arrangement for tank cars, is removed and a brake staff of 0.019-inch brass wire installed. I usually add a Tichy tank car brake wheel, as I did here.
The Athearn bottom sheet, designed for their three-compartment car, also needs cleaning up. All rivets on this part should be removed, though I sometimes leave the ones on the center anchor. All other rivets definitely go. The bottom sheet in my custom-deocrated kit is black, and the prototype photo above shows that it should be black, though the prototype one is located very low on the tank. I chose not to try and reproduce that location.
I could now assemble bottom sheet to tank, and underframe to tank body, and did so. Here is the model at this point, with primer on the bonnet and walkways. You can just see the brake wheel on the near end (click to enlarge if you wish).

I will show how I handled the ladders, and will complete the rest of the model, including weathering, in an upcoming post.
Tony Thompson
Posted by Tony Thompson at 11:52 AM