How I set up an operating session

I received an interesting query by e-mail after my recent post about the first “public” operating sessions on my layout in its present form; you can read that post at this link: http://modelingthesp.blogspot.com/2015/05/a-public-operating-session.html . The question involved some of the details in setting up the sessions, and I replied with a link to a post I wrote some time back, covering more broadly many of the issues for layouts in general (see it at: http://modelingthesp.blogspot.com/2013/09/setting-up-operating-session.html ). But the questioner had more specific concerns about waybills and movement of freight cars on my layout, thus this post.
I have long believed in, and have tried to implement, car movements derived from an idea called “demand-based car flow,” and wrote three blog posts about it (the core post is probably the second in the series, which can be found at: http://modelingthesp.blogspot.com/2011/11/operations-demand-based-car-flow-2.html ). Over a series of sessions when I operate the layout by myself, this works fine. But it can result in irregular traffic flows, sometimes considerably so, and for operating sessions with guests, I modify the layout status to get a more “average” traffic flow. Here’s how I do that — and you could do it this way even if you have no car-flow system at all.
My first step to set up a guest session is to walk around the layout and see what freight cars are in what locations, and consider the next moves of each, that is, whether they are loaded or empty, and how their movement will affect the totality of switching moves in that town. I sometimes carry a pad of paper to make notes, and gradually I build up a picture of what all would or could transpire in a session.
Then I look at my staging table and my open shelves for car storage (the latter were described and shown in a photograph contained in a prior post: http://modelingthesp.blogspot.com/2011/12/operations-car-flow-and-car-storage.html ) to see what options I have readily available for new cars arriving on the layout. These may or may not be cars that would be chosen from my car-flow schedule. Many of them can become inbound cars to the industrial spurs which I have just surveyed to identify outbound cars which would leave those industries. Again, especially if I am using a pad of paper, I can add these to my picture of the possible car movements.
At this point, I am imagining car movements such as spotting an empty wine tank car for loading, at my winery in Ballard, as in this view: 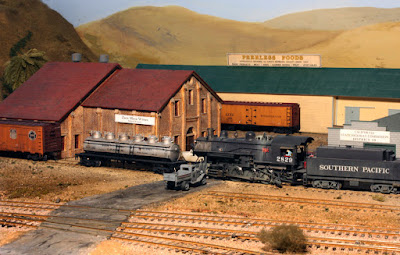 The same kind of imaginary plan of car movement is evaluated at every industry in each town. As I said, most of what I have been describing has come about from my car-flow schedule, but is being considered for modification to suit visiting operators.
Next I look at waybills for all the candidate new cars, especially the ones which would become the new inbound cars. They may already have waybills made out that would be suitable for what I need, or sometimes they don’t. If not, of course, the right waybills are quick and easy to create and print out for use in the session. [In this blog I have written numerous posts about waybill usage, and you can search for them using the search box in the upper right corner of the blog page, with a search term like “waybills” or something more specific.]
These inbound cars, by the way, can be staged onto the layout in advance, where needed, or can be placed in the Guadalupe Local so that they arrive at Shumala in the middle of the operating session.
Usually I would then make sure I have everything covered, by making a quick list of the car movements in the session, to make sure there are no omissions, duplications, or other sources of confusion. But if things seem straightforward, with movements that I am familiar with in most cases, I would not bother with a list.
Finally, I would sketch up a list of the agent messages needed for each town, based on what I have put together for car movements. Though not absolutely necessary for most movements, they do help crews with some information, as I described in my previous blog post (see that post at: http://modelingthesp.blogspot.com/2015/06/operating-with-agent-messages.html ).

Then my hope is that each operating crew person can figure out the switching to be done, and proceed to do it, as Ray DeBlieck is doing at Shumala in this photo. 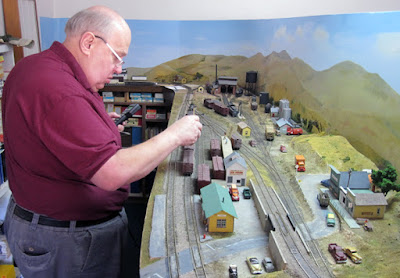 As you can see, the entire set-up process does not take a lot of time, though making lists, agent messages, and (if needed) making more waybills may take some additional time to complete. So far my set-ups have been successful in laying out duties for crews, so I guess my process works.
Tony Thompson
Posted by Tony Thompson at 10:21 AM