A fishing boat for my Santa Rosalia waterfront

On my fictional SP branch, I imagine that the track ends at a town called Santa Rosalia, located at the mouth of the Santa Maria River, and that a few fishing boats work out of there. Accordingly, it would be a nice feature to have such a boat moored at a dock. I have already said a little about my waterfront ideas for Santa Rosalia in a prior post (you can read that initial post at: http://modelingthesp.blogspot.com/2014/07/constructing-santa-rosalia-waters-edge.html ), and more recently showed my progress in modeling along the new waterfront ( http://modelingthesp.blogspot.com/2015/06/santa-rosalia-waters-edge-part-2.html ). A local fishery in turn could support a cannery (though probably not the shipping of much fresh fish). I have already gone ahead and created a model cannery, as described in an earlier post (see it at: http://modelingthesp.blogspot.com/2015/05/kitbashing-santa-rosalia-cannery.html ).
But if there is to be a fishing boat modeled, the first question a person might ask (and I would say, ought to ask), is what kind of small fishing boats were or are used in this area? As it happens, I found a photo some time ago which clearly shows several such boats, in an image supplied by the Morro Bay (California) Visitor’s Bureau. It of course emphasizes a vivid sunset and the monumental Morro Rock, but that fishing boat in the center foreground is a clear example to work from. Morro Bay is just a few miles up the coast from my supposed location of Santa Rosalia. 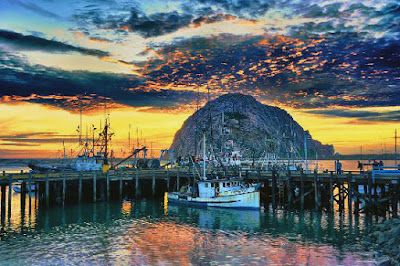 Is Morro Bay relevant? I have spent some time with a very interesting and topical report about the fisheries of central California, entitled “Commercial fishing grounds and their relative importance off the Central Coast of California,” submitted in response to the California Marine Life Protection Act, with principal author Astrid Scholz, then of Ecotrust (it’s 40 pages and is available at the website of the California Department of Fish and Game: http://www.dfg.ca.gov/mlpa/pdfs/agenda_workshop041807_report.pdf ). This 2006 report clearly shows an important fishing ground between Point Buchon on the north, and points Sal and Purissima on the south, with the mouth of the Santa Maria River right in the middle. So the Morro Bay boat shown above would work in the same fishery as would my purported Santa Rosalia boat.
Other California fishery studies contain fishing boat photos, broadly similar to the one shown above. Here is one example, and like the photo above, the cabin is fairly long.

Here is another image, a boat with a shorter cabin and a different rig, with a net reel amidships. Naturally there are a wide range of boat details, even in this one fishery. 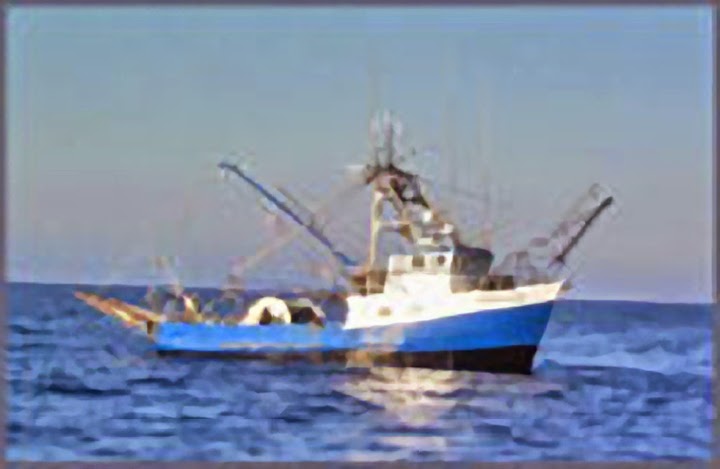 I have long admired the fine models of boats offered by Frenchman River Model Works, and seemed to remember that they offer a small boat generally like this. And indeed they do, their kit no. 81. You can see it on their web site: http://www.frenchmanriver.com/Pages/HO/Boats/fishing/fishing.html . I was sufficiently impressed to go ahead and order the kit. The cabin is shorter than many Central California boats, and I could change the cabin in the direction of the Morro Bay boat shown above, but with so many variations among individual boats, I don’t think it will be necessary.
A couple of days after I placed the order, the kit showed up via Priority Mail, which is excellent service. The kit can be built two ways (cabin forward or cabin aft), as this flyer shows (you can click to enlarge).

As visible in the prototype photos at the top of this post and in other observations, the “cabin forward” orientation, left photo in the model images above, should be my choice.
I opened up the kit, and immediately found that the parts are very nice, major parts cast in a brown resin, accompanied by some white metal details, all with little flash and fitting well together. I proceeded to put together the basic elements, as you see here, so I could use the model to help me proportion my waterfront elements.

The basic hatches, body details, and cabin are shown unpainted. I am considering  perhaps raising the profile of the bow, after looking at the two California prototype photos above, but haven’t decided. Then, when more details are attached, the plan is to airbrush white or light gray as a base coat. I will show addition of details, along with painting, in a future post.
Tony Thompson