I began this series of posts with a discussion of straight or box trucks (see: http://modelingthesp.blogspot.com/2015/07/modeling-highway-trucks-part-1-box.html ). The second post was an introduction to modeling of semi-trailers, particularly Western ones (and that post can be read at this link: http://modelingthesp.blogspot.com/2015/07/modeling-highway-trucks-part-2-semi.html ). In this post I will continue with more modeling of semi-trailers.
A point I have not raised earlier but worth mentioning is capacity of these trailers. The Classic Metal Works (CMW) 32-foot Aerovan trailer, shown in the previous post (link above) has a single rear axle, all right for local delivery and other light assignments, but not likely for heavier intercity work. A dual-axle bogie like the ones under the Ulrich trailers would be more appropriate. But there is a better source.
Modelers of a certain age are almost certain to own a few of the old Athearn 24-foot trailers. Though simplified, these are decent models of short trailers for anyone who is not really a truck modeler. Here is a pair of them. 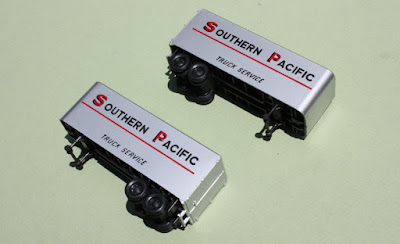 The paint scheme shown postdates my modeling era of 1953, so the lettering shown is unwanted for my layout. This lettering comes off quite easily with a Q-tip and some rubbing alcohol.
But to anyone who knows trucking, there is one glaring oddity about this model: its dual-axle rear wheels. That application was rare in short trailers like this, which were used mostly for pick up and delivery, and perhaps resulted from Athearn wishing to make the model look more substantial. A single axle would be much more typical (Paul Koehler is one of those who pointed this out to me). Of course I just mentioned the CMW trailer that should have two axles instead of one, so why not swap?
A razor saw makes short work of removing the Athearn bogie flush with the underframe of its trailer. Then I used a razor blade to carefully cut the mounting posts of the CMW trailer single-axle bogie. Each can now be glued to the other trailer. I used Plastruct “Plastic Weld” cement for a secure joint.
This bogie exchange permits a more realistic set-up of the Los Angeles – Seattle Motor Express (LASME) rig I showed in the previous post, now using an Ulrich Kenworth tractor, as would be typical for over-the-road hauling. The 32-foot CMW trailer now has two rear axles. At the same time, the revamped Athearn 24-foot trailer with a new single axle looks better behind the CMW 1941-46 Chevy tractor, a lighter hauler and appropriate for, say, city delivery. 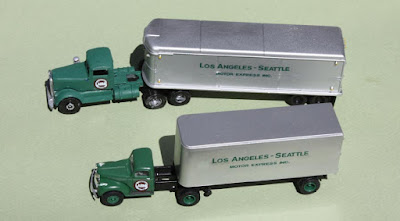 I stripped the paint from some of my Athearn 24-foot trailers and repainted them other colors, such as white. The Coast Truck Lines trailers shown below was made with another Graphics on Demand lettering set (you can visit them at: http://store.graphicsdemand.com/ ), with the trailer converted to a single axle and hauled by a CMW Chevy tractor. (It’s not yet weathered.) This single axle is from a CMW trailer, but it is even easier to simply slice off the forward axle on the original Athearn bogie.

I said a little about paint schemes in the previous post. To expand on that, here are three of the original Ulrich trailers I’ve collected. They are lettered for Illinois California Express, Garrett Freight Lines, and Denver Chicago Trucking Company. All three represent active motor carriers in the 1950s, which I model, and all were Western companies or served the West. At least one side of each trailer will be kept as it is, though a couple of them may get other lettering on the “other side” of the trailer. 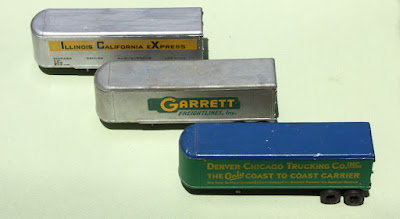 I’m pretty sure the blue roof on the Denver–Chicago trailer is the product of someone’s imagination, but it’s easy to correct.
These model trucks are not intended as exact models of their various prototypes, certainly less rigorous than my railroad freight cars, but they supply one part of the highway vehicle fleet that shows on the roads of my layout.
Tony Thompson
Posted by Tony Thompson at 10:27 AM