There have been HO scale automobiles for decades, and of course I can’t begin to provide any kind of overview or summary of these. Instead, I will just mention a few recent projects of my own. Today, modelers are very familiar with the generally fine replicas made by Classic Metal Works or CMW (“Mini Metals”) and by Acme. In this post, I go beyond those.
Below are a selection of kits and complete vehicles, somewhat randomly selected, from my stash of vehicles. I am including light trucks here. From left to right, they are, in the top row, a Stoney Mountain model of a 1938 GMC box truck, a Sylvan Scale Models 1948–53 Chevrolet tank truck, a Greg’s Garage 1946 Pontiac “Streamline,” and the Williams Bros. set of three 1940 Ford coupes. Below are a Jordan 1929 Ford Model A Railway Express truck, a CMW 1936 Ford sedan, and a later Greg’s Garage model of a 1941–47 Dodge truck cab and chassis. The Sylvan line is especially large and impressive and well as accurate, and I recommend them if you don’t already know them (you can visit them at: http://www.sylvanscalemodels.com/ ). 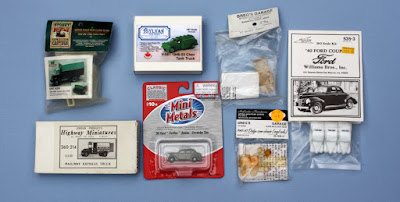 Greg’s Garage was originally in Saginaw, Michigan, when founder Greg Brown ran it, and later was in Burtonsville, Maryland under new ownership. Stoney Mountain makes a variety of products and is on the web at this link: http://www.stoneymountaincc.com/ . The advantage of all these vehicle kits is that they provide variety. I model 1953, but as I well remember from my teenage years, there were still plenty of cars around from previous decades.
Several of these kits are resin castings, using clear resin so that the windows look open but the body is a simple, one-piece casting. The Williams cars are hollow moldings, so window glass, if desired, would have to be added (perhaps with Microscale “Krystal Klear” or canopy glue). The Stoney Mountain kit is opaque resin, so a choice of dark window color has to be made.
These models can generally be brush painted (for the clear resin ones) or airbrushed. A key point on finishing, especially automobiles, is the chrome trim. It is so small in HO scale that it really is not possible to do with a brush, even the very smallest size. A great tip I learned from building a Sylvan Scale Models kit is to use a toothpick to apply the silver paint. Simple and works great.
I of course apply 1953 California license plates to my autos (along with a few out of state plates), as I have described before. One blog post on this topic is at: http://modelingthesp.blogspot.com/2012/11/vehicle-license-plates-in-ho-scale.html , and I have more discussion of it in my upcoming column in the August 2015 issue of Model Railroad Hobbyist.
I will just show a few examples of vehicles on my layout. I didn’t include any Magnuson Models vehicle kits in the photo above, though I have built their 1948 Ford coupe and the 1953 Chevrolet. I especially like the latter car. My dad bought one new, and it was the first car in which I was allowed to drive by myself. So I felt obliged to paint it in the two-tone green and yellow scheme that my dad’s car had. Here it’s on Chamisal Road in my layout town of Shumala. 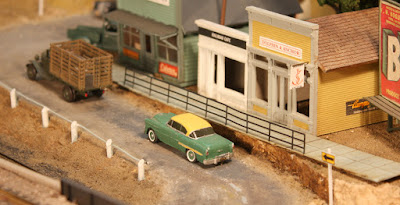 One make of model car that is easy to build is the Williams Bros. type, which are simple moldings. Though not superdetailed, they do have interiors and open windows. Here is one of the 1940 Ford coupes, on Nipomo Street at the town of Ballard on my layout.

In the background is one of my interchangeable billboards, the concept and construction of which I described briefly in a prior post (see it at: http://modelingthesp.blogspot.com/2015/04/interchangeable-billboards.html ).
I mentioned the familiar CMW vehicles above, and to many modelers they are attractive because they are ready to run (with, perhaps, the addition of license plates). The same is true of Oxford Diecast, which has produced several nice HO vehicles that I could use. And there are several European makers which occasionally produce a North American vehicle.
Another maker worth mentioning is Alloy Forms, producers of metal kits, at one time, and ready-to-run vehicles. Here is their 1948 Ford convertible, a very nice model car to park in a prominent location, like the parking area at my Ballard depot. I especially like the period whitewall tires.

Behind the convertible is a 1949 Studebaker “Commander,” also from Alloy Forms.
I mentioned the Greg’s Garage kits above, which are clear cast resin and require only painting and the addition of the wheels which come in the kit. Here is the 1946 Pontiac “Streamline,” shown at the section house on my SP main line. That’s a Dyna-Models 1947 Ford pickup truck behind it.

The point I hope I am making is that there are really a lot of HO scale vehicles out there, past and present, and the kits are well worth a look. They offer access to automakers and years not otherwise available.
Tony Thompson
Posted by Tony Thompson at 1:46 PM