In my layout town of Ballard, the road which passes the depot is Bromela Road. This location can be seen on schematic maps, as I showed in my column for Model Railroad Hobbyist in October 2014. Here’s the current Ballard map; Bromela Road is at right. (You can click to enlarge.) 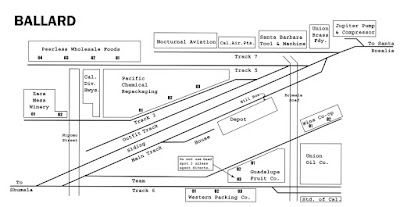 I built a new grade crossing into this road to serve an additional industry (described here:  http://modelingthesp.blogspot.com/2014/08/a-new-grade-crossing-in-ballard.html ), with the completion shown in a following post (a link: http://modelingthesp.blogspot.com/2014/09/new-grade-crossing-ballard-part-2.html ). That’s the spur at lower right, to the Standard Oil dealer.
In the map above, Bromela Road crosses the main and siding tracks, then makes a vaguely defined turn to the left between tracks 5 and 7. It was always my intention to make some kind of extension of the road along that alignment, but it’s never really come together. Partly to prepare for my idea of adding a truck dump alongside Track 5, I decided to go ahead with building this road extension.
I chose to use styrene for this roadway, a material I like. I have shown my method with this material earlier, when building Pismo Dunes Road (see: http://modelingthesp.blogspot.com/2015/02/pismo-dunes-road-part-3-alder-street.html ), and would not repeat it, except that in the case of the Bromela Road modeling, I needed to generate a smooth transition between two levels of scenery. Pismo Dunes Road is level on my layout.
I began by taking a sheet of newsprint and working on the layout itself, I cut out a a variety of road sizes and shapes until I was happy with the way one of them fit the space. Then I used the paper pattern as a guide to cut a piece from my large sheet of 1/16-inch styrene and primed it with Testor’s Aircraft Dark Gray.

The paper pattern (top) is shown alongside the primed styrene piece. There is a deliberate narrowing of the road, to force a little perspective.
Once the primed styrene was ready, I mixed up a generous batch of Sculptamold to act as a glue for the roadway piece, spread some under the path of the road, and pressed the styrene into it, adjusting to get a smooth vertical curve. I then weighted each end of the styrene so it could set up. In the view below, I think you can detect that there is a grade in the road, climbing toward the background scenery level. Most roadway edges were also blended with Sculptamold.

Weights here are a small anvil at left, and a slice of a lead ingot at right. In the center of the photo, the first stage in making the truck dump ramp can be seen.
With this step completed, and the roadway well glued to its location, I made another batch of paper mache, this time the Brandt’s Taxidermist’s material, which with its finer grain makes a smoother surface. (There are many comparable paper mache products for taxidermists, all over the Internet; here’s just one example: http://www.mckenziesp.com/Maches-C4869.aspx .) I completed blending the road shoulders, and also faired the new roadway onto the adjacent road areas.
With the contours looking all right alongside the roadway, I painted all the shoulders with Rust-Oleum “Nutmeg” and the roadway itself with gray primer. Now the road was looking much better, even though the “asphalt” color still needs improvement! To me, this primer color is too bluish and needs to be warmer. But the smooth road contour as it climbs upward is what I wanted. 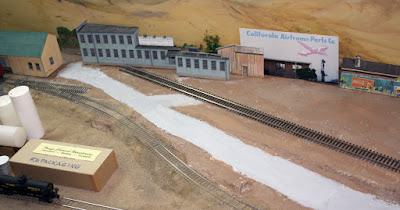 The track in the background is simply lying in an approximate location of where Track 7 will eventually be.
All that remains now is scenic treatment of the shoulders, and better road paint. The truck dump also needs development, but that is still a ways off.
Tony Thompson
Posted by Tony Thompson at 10:20 AM