The 80th annual national convention of the National Model Railroad Association (NMRA) was held last week in Portland, Oregon. The host hotel was the DoubleTree at Lloyd Center, and it proved a very good venue for the talks and exhibit rooms. The Expo Center a few miles away was the site of the National Train Show on August 28–30. Though I was there all week, and took in many events, I can give only a tiny sample of all the activities in what I believe was an outstanding NMRA convention. Chairman Doug Auburg and his many staff did a great job.
Among the essential features of any convention hotel is a good gathering place for people to meet and talk, and for some, a place to get the drink of their choice. The bar just off the lobby at this DoubleTree was a very good example of this, and I confess to spending a certain amount of time here myself. 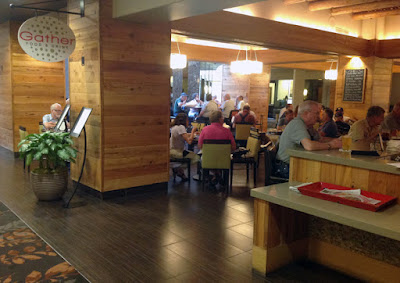 One centerpiece for me at any such meeting is the clinic program, and this one was very full and largely very good. There were the usual nationally-known suspects giving talks, along with plenty of regional and even local speakers, making the program well rounded. There were few clinic times that I was not in a clinic room. I will just show a single photo, of Ed Merrin presenting his talk on the Northwestern Pacific, to illustrate this part of the convention. 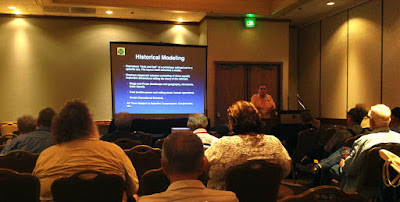 I gave two talks myself, each one twice, one on PFE operations, the other on Building a Realistic Bulk Oil Dealership (the handout for it is at this link: http://modelingthesp.blogspot.com/2015/08/handout-for-oil-dealership-clinic.html ).
There was a very nice Railroad Prototype Modelers (RPM) room, though not displaying large numbers of models, doubtless due to minimal advance publicity. Tim Costello took on the burden of organizing and hosting this room, and one of the models on display which I especially liked was his depiction of a Milwaukee Road PS-1 box car later in its life, having been renumbered. He faded the Kadee manufacturer’s lettering with fine sandpaper, a very nice look. You can click to enlarge. 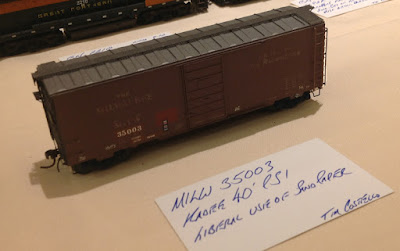 Another nice exhibit at the RPM room was the classic approach in which the drawing that was the basis for the model is shown, along with a prototype photo, and the finished model. This is Kyle Gardiner’s Canadian Pacific sand house, very nice modeling.

The usual NMRA contest room likewise did not have all that many models, but the quality level seemed very high to me.
In recent years, Iwata-Medea has offered airbrushing clinics at many conventions, and this time I decided to attend. I have a pretty old airbrush, and thought I ought to try a hands-on experience with a well-made modern one. The clinics were presented by Alan Houtz (the morning one that I attended) and in the afternoon, by Tom Grossman, both very well done (I spectated a bit at Tom’s session). Here is a shot of the afternoon group. The hotel carpet was protected with plastic sheeting. 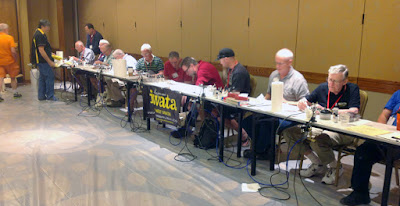 Full disclosure: I liked the Iwata brush I used enough to buy one!
Then the finale of the convention, the National Train Show, is always worthwhile, This year the number of vendors was not as big as some years, but the booths were still very interesting and well worth the time spent in visiting every one. This shot shows the Model Railroad Hobbyist store. 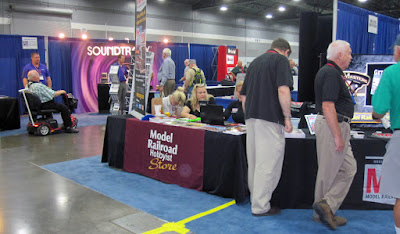 All in all, it was an outstanding convention, above average in my experience of NMRA national conventions. I really enjoyed it and was glad I could go.
Tony Thompson
Posted by Tony Thompson at 9:45 AM