In Part 1 of this thread, which is at: http://modelingthesp.blogspot.com/2015/08/a-union-oil-company-bulk-dealer.html , I showed the basic changes made to a Chooch resin kit for a bulk oil dealership, including the warehouse that I added to the kit. Another feature I wanted to add was an unloading spot with a hose.
I also wanted to have a suitably painted truck for local deliveries. I chose a Wiking tank truck of suitable size, and then wondered about Union Oil paint schemes for such trucks. I was able to find a photo in one of the Union Oil company histories, and will say more about those books since it may suggest how modelers may learn about any oil company they choose to model. Union Oil contracted with authors Earl M. Welty and Frank J. Taylor to write a company history (originally titled The Black Bonanza), and it was published in 1950, then re-issued in revised editions in 1956 and 1958, all by McGraw-Hill. In 1966, the book was extensively revised and issued again as The 76 Bonanza by Lane Book Company, and still another time in 1976 as The Sign of the 76. Not every oil company has this kind of published material, but articles in business magazines, major newspapers, and of course today on the Internet, can all furnish valuable modeling information.
Getting back to that topic of truck paint schemes, here is an interesting photo of some Union trucks from the 1956 edition of The Black Bonanza. 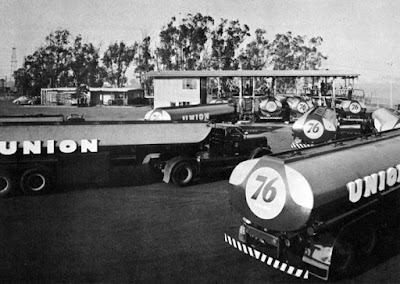 The semi-trailers seem all to have raised letters spelling out “UNION,” but the straight trucks, like my model, did not. Most visible trailers in the view above have dark blue bodies with orange along either side of the upper tank body, but there is at least one all-blue truck and at least one all-orange trailer visible in the photo (possibly those are earlier paint schemes). I was happy not to have to figure out how to do the raised letters.
My Wiking truck looks like this, with a 1953 California truck license plate. Probably the blue should be darker. 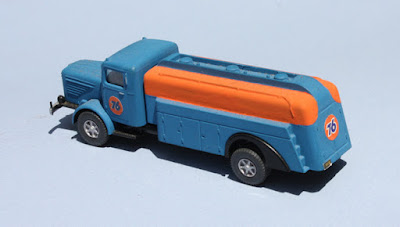 In the photo below, I show the completed dealership, with truck alongside, The road in the foreground is Bromela Road in my town of Ballard, with the brick warehouse of the Ballard Wine-Growers Cooperative in the left background, and some SP section houses in the right background. I plan to add a large round “76” sign on the Union warehouse wall just to the right of the truck. 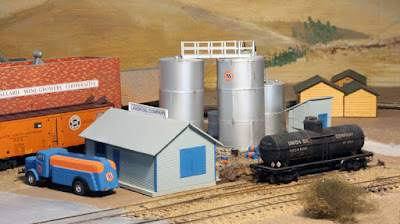 The Union Oil Company tank car in the foreground of the photo above conceals the unloading arrangement at this dealer. I modeled this unloading area with a length of duckboards, construction of which was described in a previous post (see it at: http://modelingthesp.blogspot.com/2015/08/duckboards.html ). I added an intake-pipe hose connection and two lengths of hose lying on the duckboards, made from No. 22 wire with black insulation. It’s shown below. You can click to enlarge.

The tank car has been moved away from the unloading spot so you can see the arrangement.
I might mention that this Union Oil model was included in the clinic I presented at the Portland NMRA national convention (August 2015), and the handout for that clinic is available as an earlier post in this blog (you can view it at: http://modelingthesp.blogspot.com/2015/08/handout-for-oil-dealership-clinic.html ).
The Union Oil Company dealership shown in this post was first modeled some years ago when I built the basic Chooch kit and added the two vertical tanks at the back, and after awhile I added the warehouse also. That was the model on the layout until I was able to complete painting the delivery truck and add the unloading spot. It is now fully part of my operating sessions, usually receiving loads in Union Oil Company tank cars, but sometimes loads in leasing-company tank cars (GATX or SHPX) and occasionally gasoline in SP tank cars. All of those kinds of deliveries are known to be prototypical for Union Oil.
Tony Thompson
Posted by Tony Thompson at 10:00 AM