I have shown in a number of recent posts my models of oil dealerships for the Associated Oil Company and for Union Oil Company of California, and the core of the Associated project made up my “Getting Real” column in the Model Railroad Hobbyist issue for March 2014 (you can download this or any issue of MRH, any time, for free, at their web site: www.mrhmag.com ). But I also wanted to add another bulk oil dealer to my town of Ballard (two or more oil dealerships in small town was very common). In fact, my two dealerships would be reached on adjacent spurs.
The problem, and the opportunity, was that there was really no room for another industry at the desired location. The opportunity part is that the industry doesn’t actually have to be modeled, just the unloading spur and equipment. Shown below is the site, on the side of the trackage toward the bottom of the photo, and you can see how little space was actually there, certainly too little to include any storage tanks or warehouse. 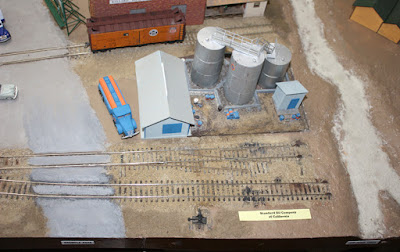 You can see a narrow strip of yellow paper on the site, which has informed crews that the location is a Standard Oil Company of California facility.
But I can readily model an unloading spot, even if all the other components of a bulk dealer can’t be fitted in. My first item needed would be duckboards along the area where workmen would connect hoses for gravity unloading of tank cars. Duckboards and their modeling was discussed in a previous post, which you can see at: http://modelingthesp.blogspot.com/2015/08/duckboards.html . Second, I wanted to include some structure that could support a sign identifying the facility as Standard of California. A pumphouse would be appropriate near the unloading area, and would typically be pretty small, so I built one from scratch. I used Evergreen styrene sheet in the form of “Novelty” or shiplap siding, no. 4083, and cut out four walls for an 8 x 9-foot building. For a simple door, I added a Grandt Line no. 5021 five-panel door, which is the gray part. Here are the components of my pump house: 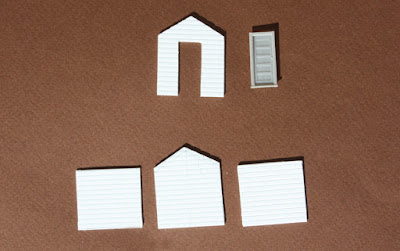 Next, of course, the walls were assembled into a box, with styrene strip in the inside corners, and the door installed. Trim strips on building corners remain to be added. 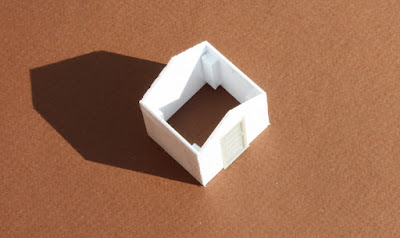 I added corner trim strips of scale 1 x 8-inch styrene, painted the building with Testor’s medium gray, made a simple corrugated roof, and painted the roof with Tamiya “Gunship Grey.” To the most visible side of the pump house, I added the Standard emblem used by Standard Oil of California all through the 1950s (readily found on the Internet).
As suggested above, I also built duckboards, and added some intake piping with leftover plumbing from the McGraw Oil kit which was the foundation for my Associated Oil Company dealership, then made lengths of hose from No. 22 wire with black insulation. This is all shown below. 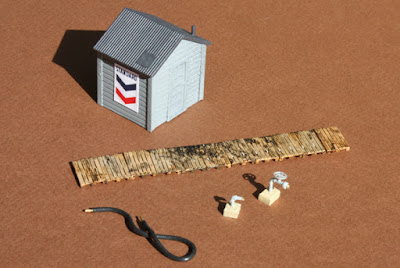 Each of the two intake pipes is supported by a block of styrene, painted Concrete, and bronze fittings are suggested with gold paint. Some lines of military modeling colors do have a Bronze paint, but I have not picked any up yet (I can always repaint these details).
All assembled and in place on the layout, this nearly virtual dealership model looks like the photo below. I have two duckboards, each with an inlet pipe, and more details need to be added, probably a pipe storage rack in the right foreground. But this certainly works as a switching destination. 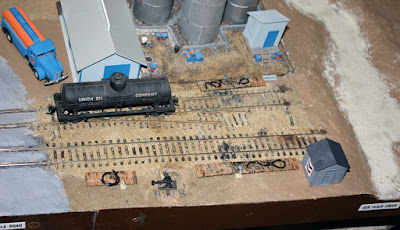 I might mention that this Standard Oil model was included in the clinic I presented at the Portland NMRA national convention (August 2015), and the handout for that clinic is available as an earlier post in this blog (you can view it at: http://modelingthesp.blogspot.com/2015/08/handout-for-oil-dealership-clinic.html ).
As is evident, all I have actually modeled of this particular dealership is the siding and the unloading capability. I included a pump house mostly so I can put up a Standard sign to identify the industry. Works for me.
Tony Thompson
Posted by Tony Thompson at 5:45 AM