Seasonality of crops and traffic

We all know perfectly well that agriculture is seasonal, with any number of familiar items of produce being available only in certain parts of the year. This of course reflects when each particular crop is harvested (though some, like apples, are disbursed from storage outside of harvest season). The seasonality of harvest in turn affects rail shipment of produce (for those modeling such shipment). But is this seasonality often modeled? I would say “not often,” though of course those who model a particular date, or a month (as Richard Hendrickson did in choosing October 1947) do keep repeating the exact same season every time they operate. With respect to agriculture, it’s kind of the modeling implementation of the Groundhog Day movie.
One thing I thought would be interesting to model on my layout is the changing harvest seasons in California, where a truly broad range of crops is grown. How would you go about learning the necessary information to model those seasons? There are extensive U.S. Dept. of Agriculture (USDA) reports, both descriptive and statistical, for most areas of the country and spanning many years. But for my layout, Southern Pacific territory harvests are described, by growing area, in a six-page table in the back of the PFE book (Pacific Fruit Express, 2nd edition, A.W. Thompson, R.J. Church, and B.H. Jones, Signature Press, Berkeley and Wilton, CA, 2000). It lists 43 different crops, from anise to watermelons, and gives both the main harvest season (black bars in the chart below) and lesser harvest seasons (gray bars).
I selected out the vegetable crops I know were and are produced in the general area I model, called the Guadalupe-Santa Maria District (mostly the Santa Maria Plain on both sides of the Santa Maria River). I have just used the table entry lines for that district. You can click to enlarge.

These data are from the 1940s. I have been warned by those who know farming, that these data will inevitably vary over time, as new varieties of each crop are introduced, often chosen to ripen at less competitive times of year for that crop, and older varieties may cease to be planted. But these data certainly give me a starting point.
In a previous post, I gave a general introduction to this topic and to use of these harvest season tables, and to the topic of pre-cooling produce. You can read it at: http://modelingthesp.blogspot.com/2011/08/few-words-on-packing-houses-and-produce.html .
Perhaps the most striking thing about the table shown above is that there is something being harvested in this district in every month of the year, and in each month there is at least one peak harvest period in progress. And one crop I know was and is significant in the district, carrots, is not even shown. Carrot season in this district is all but year-round, so it can be added to the eight crops listed in the table above.
I have two vegetable packing houses on my layout, Phelan & Taylor in Shumala and Western Packing in Ballard, so both can reflect the seasonality you see above. I have created waybills to mirror that (more about them in a moment).
Fruit is much more seasonal than vegetables. I also have two fruit-packing houses on the layout, Guadalupe Fruit in Balland and Coastal Citrus (lemons) in Santa Rosalia. Lemons are shipped nearly year-round, but Guadalupe Fruit primarily packs tree fruit, harvested from May to September, and is accordingly shut down in other months. In addition, my two wine-making industries, Zaca Mesa Winery and the Wine-Growers Cooperative Association, both in Ballard, ship wine grapes in the fall harvest season. (For more about grape traffic as part of the wine business, see my post at: http://modelingthesp.blogspot.com/2012/02/wine-as-industrial-commodity.html .)
Although these fruit crops are not shown for the Guadalupe-Santa Maria District in the 1940s SP tables in the PFE book, I have another crop summary for this area, which permits me to construct something like the above table, for the fruit grown in this area, mostly on Nipomo Mesa. The grape season shown is for wine grapes, not table grapes. I have also included some  citrus at the bottom of the table. This is a small exaggeration in the case of lemons, as the area I modeled is some miles north of actual lemon territory. Navel oranges, on the other hand, were in fact raised on the Nipomo Mesa, though barely in commercial quantity, so I can include an occasional orange carload too, in the span of December to March.

My core idea for layout operations is that the packing house shipments reflect the current actual season. That is, the day and month on the layout are those of the current calendar, though the year is always 1953. Right now, since it’s September, the shipments on my layout reflect what you see in the tables above for September: primarily celery, lettuce and tomatoes, with a few carloads of broccoli and carrots. For fruit shipments, there is really only wine grapes and lemons at this time.
Over time, I have created Southern Pacific outbound waybills for all non-meat refrigerator cars in my fleet, because all might be used on occasion for perishables shipped from my packing houses. Thus I can add variety with “overlay” or stub waybills, for different destinations and different cargoes. (The design and use of these overlay bills was described in an earlier post, which is at this link: http://modelingthesp.blogspot.com/2015/06/waybills-part-41-overlay-bills.html .) Here are four of my overlay bills, suitable for September vegetable shipping. 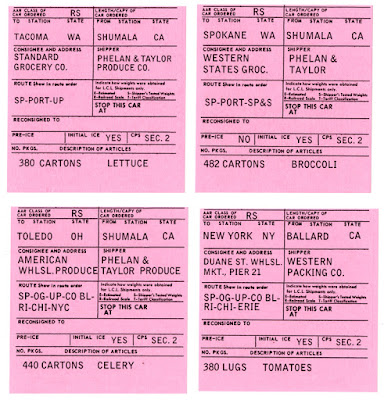 The description in this post outlines the general approach I have taken to reflect seasonality of crops in my modeled area, through the rail shipments that result. Obviously this approach could readily be adopted to any area of the country, though in most other areas there would probably be a smaller variety of crops being grown .
Tony Thompson
Posted by Tony Thompson at 9:52 AM