This post discusses one approach to the interesting issues and challenges when various kinds of vehicles are loaded on railroad flat cars. One can rely on prototype photos for how this is done, or if one has access to them, one or more of the Loading Rules books. Rules for loading open-top cars with a variety of cargoes were originated by the Master Car Builders’ Association or MCB in 1896, first as recommendations, then advanced to Standard in 1908. Thereafter, revisions were issued from time to time by the American Railway Association (ARA), whose Mechanical Division was the successor to the MCB. In 1934, when the Association of American Railroads (AAR) succeeded the ARA, these rules became AAR rules.
In an earlier post, I showed one of Richard Hendrickson’s flat car loads, with surplus Army trucks on a flat car (you can find it at this link: http://modelingthesp.blogspot.com/2015/09/more-richard-hendrickson-open-car-loads.html ). Richard owned a full set of AAR Loading Rules booklets, and always was careful to use those loading diagrams for loads like this.
Many years ago, I acquired a white metal Stewart kit for a Euclid scraper. It was simple to assemble, but a challenge to paint in the prototype’s light green. I had a good, well-lighted photo of a prototype Euclid machine and finally got my model to look like the same color. I can’t possibly describe the mix, I made so many additions of tiny amounts (“too light,” “no, too dark,” aw, too yellow,” etc.). The kit also included Euclid decals to complete the model.
The Euclid Company of Euclid, Ohio introduced its first scraper in 1924, and prospered with a series of models thereafter. In late 1953, they were purchased by General Motors, which wanted to get into more earthmoving equipment, a deal finalized on January 1, 1954. This means that my model year of 1953 would still feature Euclid-built equipment (though GM continued to use the Euclid name as long as they owned that company).  Next, I wanted to have my model on a flat car, being shipped.
One can find out how this would be blocked by looking at the ARA or AAR Loading Rules. Shown below is a diagram of how equipment like this was to be shipped, dominated by wheel chocks. Shippers were permitted to add tie-downs or other extensions of the loading diagram, but the diagram shows the required minimum. 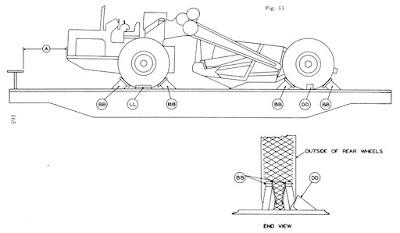 I show below a prototype photo of something like this, though unfortunately the scraper is not in the immediate foreground. But you can see the blocking on the road grader nearest the camera. This is an SP company photo, taken in 1943 (Arnold Menke collection). Here, side strips have been installed alongside wheel chocks.

My own scraper model was easy to set up this way. I used a set of resin wheel chocks produced by Heiser Models (the military models firm), chocks which follow the rules for loading of armor and heavy vehicles, but they were usable here too. I haven’t been able to find out if these chocks are still offered by Heiser. They are easy to make from stripwood, however, as I have done for other loads.
In addition to the wheel chocks, I added a crate of spare parts (or parts not installed at the factory). This was just one of the crates in the very useful Tichy set, “Wood Crates,” no. 8174. The crate also has hold-down strips on its sides. Here is the complete load on an SP flat car.

The scraper has the chocks glued to its wheels, but it is not glued to the flat car, nor is the crate. This way, I can have the scraper shipped on another flat car if desired.
I have additional vehicle loads to set up with appropriate blocking and tie-downs, and look forward to seeing them on the layout. If any go beyond the simple approach shown in this post, I will report further.
Tony Thompson
Posted by Tony Thompson at 11:42 AM