In my title, I don’t mean “bad decals” in the sense that they have come apart, or detached themselves, or gone all silvery. Those things are bad, but not what I mean in this post. Here I refer to decals which are bad representations of the correct lettering. The specific case I will comment on has luckily been addressed, and the decal maker now makes a correct set or sets, but unfortunately I applied some decals from a prior set. I decided to replace them.
The decals are for a Pacific Fruit Express refrigerator car. Just to clarify things, shown below is a detail from a prototype photo (PFE photo, my collection) which clearly shows the lettering style, and in particular the numerals, which in typographic terms are relatively condensed, compared to the alpha characters. 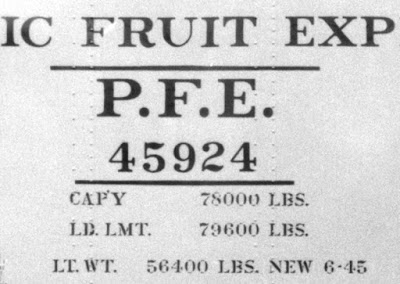 This is a steel ice car of Class R-40-20, one of the 500 cars built by General American in the 1000-car order. Note that the numerals in the car number are not perfectly spaced; these were done number by number in a hand-held stencil.
The offending decal set is the 1980s version of Microscale set 87-0414. It was evident even then that the lettering was not really right, but there were no good alternatives, including the Champ set of the day, for some items in the Microscale set. Here is a photo of a model with the lettering from this Microscale set; a comparison with the photo above should clarify the problem. The “PFE” initials are also a little small here. 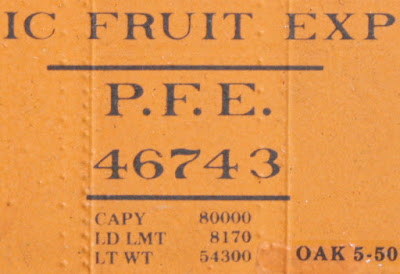 The lettering is too light overall, and the numerals in particular are too extended. I would submit that the differences are evident even if you don’t find type interesting. (By the way, the capacity data are different quantities and differently arranged because there are two different car classes shown, though there is a missing digit in the Load Limit. For photos of all relevant PFE car classes, please see the book, Pacific Fruit Express, 2nd edition, Signature Press, 2000)
Having some otherwise okay models which I didn’t like to operate because this lettering bugged me (to repeat an earlier confession, I’m a bit of a type geek; see: http://modelingthesp.blogspot.com/2011/11/type-and-typography-on-layout.html ), it was time to replace the bad decals. The simplest way is to just paint over the offending car number, but this is also an opportunity to replace all the capacity data (also deficient in the old 87-0414 set), as the prototype did when lettering was deteriorated. I used fresh Daylight Orange to paint a block on the car side, either to cover just the car number, or to cover the number and the entire data block, or to cover the car number and selected data replacement, as happened sometimes when a car was reweighed. I did all three on different cars.
Here is the new car number for the car shown in the photo above. I have left the too-small PFE initials alone. 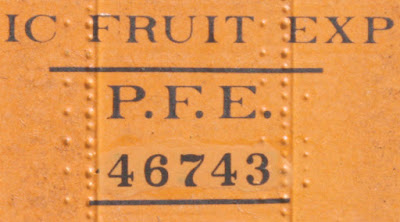 I submit that even a cursory comparison of the three photos in this post clearly shows what I am talking about for the car number. I have four other cars with the old Microscale numerals and will replace the car numbers on all four.
The current version of Microscale set 87-0414, meticulously researched and drafted by Dick Harley, is impressively complete and correct. I naturally turned to it to replace the bad old lettering shown above. As I have said before, should you happen to be hoarding an old Microscale 87-0414 set, trash it at once and buy a current version. The new lettering is just so much better.
Tony Thompson
Posted by Tony Thompson at 9:24 AM