In the previous post ( http://modelingthesp.blogspot.com/2016/05/replacing-bad-decals.html ), I showed the reason why I was replacing some bad decals, “bad” because the numerals included in that set were very unlike the prototype. The replacement decal set, the modern Microscale 87-0414, is highly recommended to anyone still hoarding an old version of this set, because the old version simply has the wrong characters.
I will show here a few of the cars I did this replacement on, without bothering to show the old lettering — that was clearly depicted in the previous post, in my opinion. And although in what follows I will provide brief historical background on each car, there is far more in the way of specifics and photos in the PFE book (Pacific Fruit Express, 2nd edition, A.W. Thompson, R.J. Church and B.H. Jones, Signature Press, Berkeley and Wilton, CA, 2000).
First, let’s look at the car whose number replacement I showed in up-close photos, PFE 46743. This is one of the 2000 cars of PFE Class R-40-23 built in 1947 and numbered 46703–48702. The paint scheme depicted is the original. Since I model 1953, the car is moderately dirty, but I would remind those familiar with PFE practice to recall that PFE washed many thousands of cars each year in this era, so that age of PFE paint scheme often does not correlate well with dirtiness of car.

I have added fan shafts, grab irons, and other details to these cars, in the general way described in other posts about upgrading Athearn reefers (see: http://modelingthesp.blogspot.com/2012/08/ujpgrading-old-models-athearn-reefers.html ).
After the first 2000 cars of PFE Class R-40-23 were numbered up to 48702, PFE decided to number the remaining 3000 cars of the class into the series 5001–8000, by this time occupied by few if any cars, and those very elderly and ready for scrapping. I modeled two of these cars, PFE 5135 and PFE 6352. The latter was modeled with hatches open, as described in an earlier post (at this link: http://modelingthesp.blogspot.com/2013/07/modeling-open-ice-hatches-on.html ), using flat brass strip to make sturdy latch bars.

Next I show one of the cars in rebuilt Class R-40-24. These 2610 cars were rebuilt in the 1947–1948 period, mostly from older R-30-13 and R-40-4 cars. Their car numbers ranged from 65921 to 68532, and were all originally rebuilt with plywood sides. That is what is depicted here, by the simple expedient of removing the rivets on the Athearn sides. The Athearn molding has a slight ridge marking panel lines, which is a lame depiction of overlapping steel sheets, but turns out to be just about right for the metal seals PFE used to try and seal its plywood sheet joints. I also replaced the Athearn steel-car door hinges with long-strap wood-car hinges (the hinges PFE preferred on wood-sheathed cars). This model approach does not give quite the correct plywood panel widths, but does convey the general appearance.

This paint scheme is that of 1949, when most side hardware became orange instead of black, but the UP emblem remained in red-white-blue.
The plywood seemed to work out well at first, but with time in service, water began to work into the seams between sheets, and gradually caused the plywood to swell, delaminate, and curl. At first, plywood sheets were replaced, but before long, the directive went out that any car with failing plywood sheathing was to be re-sheathed with conventional tongue-and-groove (T&G) siding. I decided to model one such car, using the Athearn wood-sheathed reefer as a stand-in (several of its features don’t rally match PFE practice), and it looked like the photo below. Athearn’s rendition of T&G siding is really coarse, but as a stand-in, I decided it could remain in service.

But they can also be laid on their backs, as they would be during icing, so that an icing scene can be photographed with open rather than closed hatches. Note that hatch plugs have been placed inside the hatch covers, and locking hooks (as the hatch plug/cover assemblies for Class R-40-23 did have) are also modeled. 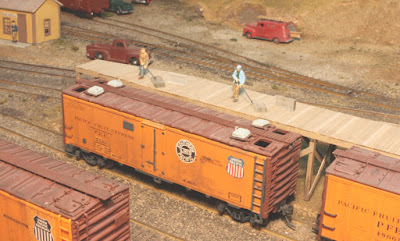 These five cars, though not as well detailed as other possible sources of PFE cars, such as InterMountain for Class R-40-23, and the Terry Wegmann/InterMountain models of Class R-40-24, or for a number of good resin kits (Sunshine and Stan Rydarowicz, for two), can serve as part of a much larger PFE fleet on my layout. And now that I have fixed the poor car numbers shown in the prior post (cited at the very top of the present post), I can put them to work.
Tony Thompson

Posted by Tony Thompson at 3:25 PM