What’s a “freight car guy?” Probably seems like an odd question, or an odd term. Here’s what I have heard it used to mean. A freight car guy takes charge of a freight car fleet, at an individual layout (other than his own) or a club, and both maintains and upgrades it. He also, in many cases, is expected to do something with vividly out-of-era cars or out-of-the-box “brand new”shiny paint schemes.
I learned this term when I was a member of the Pittsburgh Model Railroad Club (back in the days before it moved to Gibsonia in the Far North suburbs). I had been repairing some of the club freight cars, and one night at a meeting, a member came up to me and said, “Are you the Freight Car Guy?”  I capitalize the title because that’s how it sounded when he said it.
Today the Pittsburgh club has transformed itself into the Western Pennsylvania Model Railroad Museum and has an excellent and quite complete layout. But in my day, it was in the basement of a brewery office building, the former Eberhardt & Ober Brewery on Pittsburgh’s North Side; the club moved out of that deteriorating building in 1986. Below is an historical club photo. If you’d like to see more of their history, dating back to 1938, visit their website at: https://wpmrm.org/?page_id=103 . 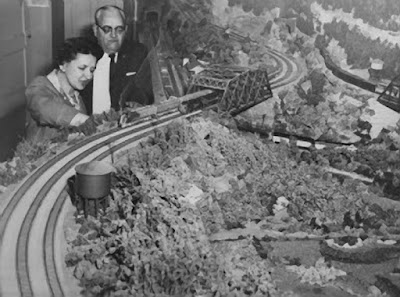 One drawback to being a Freight Car Guy is that you may find your job doesn’t get much respect in some quarters, in which case it’s time to move on. Here is a personal illustration.
My time managing club freight cars at the Pittsburgh Club came to an abrupt end, coincidentally just after I had completed a long task of washing the dust and grime off the roofs of many dozens of the club’s long-serving cars. Some members came in on a weekend shortly after that, to adjust some wiring over the layout, above a drop ceiling, and they managed to dump all the crud inside that ceiling, right onto the freight yard and all the clean cars. That was bad enough, but none of the guilty would take any responsibility or do clean-up or even express any regrets. I basically walked out.
But club foibles aside, being a Freight Car Guy can mean a wide range of things. In one case, I helped a layout owner choose the additional cars he should buy, to make his fleet suitable for the era and locale he was modeling. In a couple of other cases, I have offered advice (only when asked!!) as to whether particular cars fit into a layout scheme or not. More recently, I have seen to the adequate weathering of a large fleet of cars (along with adding correct reweigh and repack data) for one friend’s layout.
A more intriguing challenge, in some ways, is to provide help to someone who really doesn’t know much at all about freight car history, and really doesn’t greatly care — but likes the idea that someone might weed out the worst of the “wrong” freight cars on his layout. And a little weathering along the way wouldn’t go amiss either. Usually I am happy to oblige.
My first goal in such a situation is to eliminate (more on what I mean by that in a moment) the cars and/or paint schemes which are clearly out of era. We all know that a truss-rod wooden box car would be out of place in a 1980s layout, but there are many, many more subtle examples to examine. Just one example: when did Santa Fe start to apply its famous passenger train slogans to freight cars? It was at the beginning of 1940, so obviously anyone modeling an era prior to 1940 ought not to roster any cars with such a paint scheme.
As a single example, a car I re-worked for Bill Kaufman’s layout, depicting the State Belt in San Francisco in 1944, was an old MDC box car, a 1937 AAR car lettered in the post-1954 Western Maryland “speed lettering” scheme.  I re-lettered it for one of the Southern’s large group of 40-ton versions of that design, using the pre-war emblem and lettering style from Speedwitch decals.

It is fun to make use of one’s knowledge in this kind of project, while of course helping a friend achieve a layout that is, in some sense, “better.” At least a Freight Car Guy would think so.
Tony Thompson
Posted by Tony Thompson at 8:06 AM