During the last week of September, I attended a Thompson family reunion in Hawaii, which took place around the occasion of our donation of our great-grandmother’s diary of her life in the Big Island, to the North Kohala Library. There were 25 various descendants who attended. And yes, there is a railroad connection.
There were a number of railroads at one time in the Hawaiian Islands, all but one of them narrow gauge, and nearly all of them built to serve sugar plantations and mills. The one standard-gauge line was the Hawaii Consolidated Railway or HCR (from 1899 to 1916, it was the Hilo Railway) on the east end of the island. It’s of interest to me because my grandfather worked at Hakalau, north of Hilo, for a number of years as a field foreman, and my father and all his siblings were born there. Hakalau was the location of a sugar mill and was on the HCR.
The HCR was characterized, especially on its track on the Hamakua Coast north of Hilo, by many high trestles crossing the deep canyons of the east coast of the island (this 33.5 mile line had more than one bridge per mile). The photo below, from the excellent book Sugar Town, by Yasushi “Scotch” Kurisu (Watermark Publishing, Honolulu, 1995), shows a railbus of the HCR crossing one of these trestles in 1939, this one at Kolekole Gulch. Like most of the HCR’s high bridges, this one was destroyed by a massive tsunami on April 1, 1946. 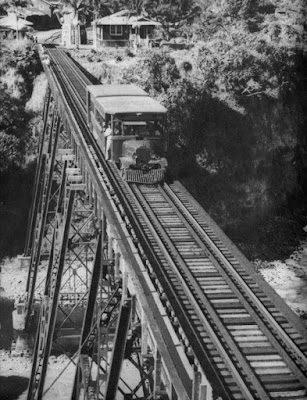 The railroad served Hakalau Plantation Company, and some of the old buildings are still standing there, as we saw on our visit. The depot was near an “armstrong” turntable, where locomotives and cars could be turned as needed. The photo below is also from Sugar Town. 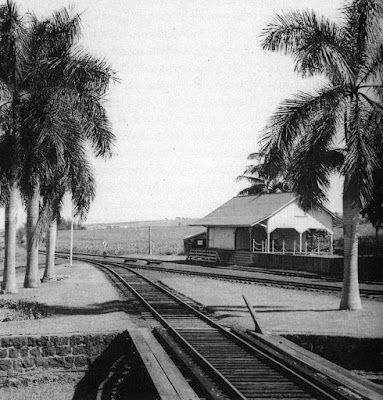 The mill at Hakalau was below the bluffs, down at the river, as you see in the photo below from 1920 (from Sugar Town). The lower bridge at right is the water flume, used to bring cane down from the fields to the mill. The upper bridge is of course the HCR. Those bents were later doubled, and this bridge survived the tsunami of 1946. Most of the right-of-way of the HCR is now occupied by Hawaii Highway 19, and some of the HCR bridges now carry the highway, including this one.

Actually, the above version of the panorama cuts off most of the trestle, doubtless because the wide-angle lens severely distorted it. Here is the right side of this 1920 complete image. It is of course a straight, level  bridge.

I have not found many equipment photos for the HCR, An exception is this view of the weed-killer equipment behind engine 91, photographed at Pa’auilo in 1943 (photo from the fine book, The Hamakua Coast by Ken Okimoto (Watermark Publishing, Honolulu, 2002). The flat car is HCR 57. 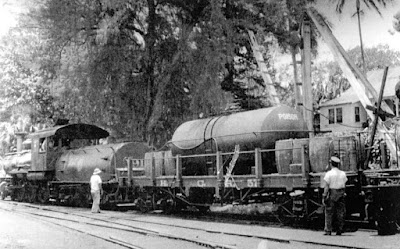 We visited the small railroad museum at Laupahoehoe, north of Hakalau, where there is a replica caboose with the HCR emblem on it. The museum building is supposed to be open on Sunday, but wasn’t when we were there. That’s my nephew Matt admiring the reproduction. 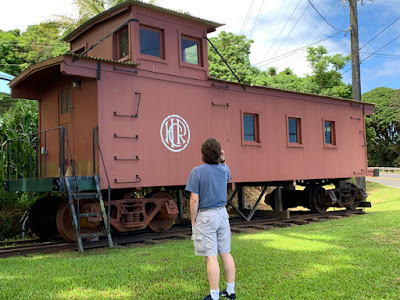 The reunion was fun, and I met a number of cousins, many once removed, some twice removed, that I had never met. And of course it was fun to visit Hakalau again and have some insight in the Hawaii Consolidated Railway that served it in my father’s day.
Tony Thompson
Posted by Tony Thompson at 1:31 AM