In the previous post in this series, Part 5, I began my discussion with a summary of the topics in the preceding four posts. If those topics aren’t already familiar, you may like to read that post for those background links (see it at: https://modelingthesp.blogspot.com/2019/09/handling-ice-on-ice-decks-part-5.html ).
In the present post, I want to wrap up my discussion of my modeling of an ice deck with some of the details. Prominent among these are the ice blocks, and I will expand a bit here on previous comments about ice. I also want to say a little about ice bridges, as they were called, and how I am modeling them.
To start, I already described and illustrated the appearance of the 300-pound ice blocks manufactured for icing of  reefers (you can find that post, Part 2 in the present series, here: https://modelingthesp.blogspot.com/2019/08/handling-ice-part-2-ice-itself.html ). Model ice blocks would hopefully be of the correct size and color, as well as details of appearance; for example, I mentioned the rounded edges and corners. Most of the ice blocks on my deck are from a couple of packages sold by Campbell Scale Models years ago; example below. 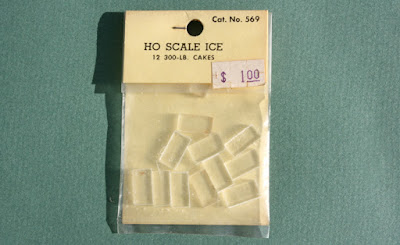 I think the hard, clear plastic in the Campbell package may be acrylic, though I am not sure. The other source in more recent years was a Sunshine Models “load kit,” in the Sunshine “F” series, kit F.8 (these do show up on eBay and other on-line sales sources). It contained a generous number of full-size ice blocks, along with half-blocks and quarter-blocks, and also a bunch of irregular chunks. It is a clear resin, much softer than the Campbell blocks. There are two castings like this in the F8 kit, plenty for all but the very largest model ice deck. And really a lot of chunks, if you want that.

What looks like larger blocks in the photo are groups of two or four PFE-size blocks.
How about the size of those ice blocks? Here is one set of dimensions I was given for PFE blocks: 3.6 feet by 1.6 feet by 1 foot. That happens to be 5.75 cubic feet. and 5.75 cubic feet of ice weighs almost exactly 300 pounds. So those dimensions are a good guide on what to shoot for, if you should choose to cut your own from a clear plastic.
The Campbell ones I have are a little oversize, while the Sunshine ones from the F.8 load kit are a little undersize. For either one, I use a small flat file to round the corners and edges, then scrub with medium-grit emery paper to cloud up the surfaces.

A nice feature of the Sunshine F.8 kit is that it includes ice bridges. I showed photos of the prototypes in use in a prior post about prototype icing (see it at this link: https://modelingthesp.blogspot.com/2019/08/handling-ice-on-ice-decks-part-3-icing.html ). There should be a couple of ice bridges on my deck, and maybe a quarter block or two. The Sunshine F.8 load kit includes  those ice chunks, and even some ice tools. I decided a few of those things could be on the deck too.The photo below shows the deck with my completed ice blocks and chunks, and some ice bridges, one stored at the end of the deck and one in position to be used. (You can click on the image to enlarge it if you like.)

This concludes what I wanted to say about icing of refrigerator cars, both on the prototype side and in the model world. Before the end of ice services in 1972, this was a very visible and important part of railroad perishable transportation, and those of us who model that era need to understand it to model it.
Tony Thompson
Posted by Tony Thompson at 10:35 AM