In the previous post, I described the kind of manufactured ice that Pacific Fruit Express used for icing refrigerator cars, an imposing 300-pound block that was a challenge to manipulate (you can read that post at this link: https://modelingthesp.blogspot.com/2019/08/handling-ice-part-2-ice-itself.html ). In the present post, I describe what was done with that ice block as it was put into the ice bunker.
Both in published magazine photographs and in layout visits, I have noticed that some modelers evidently think that the 300-pound blocks were simply maneuvered into the ice hatch and dropped. This is not true, and you can understand two reasons why.
First of all, at the beginning of icing, dropping a 300-pound block eight or more feet onto the steel grates at the bottom of the ice bunker would almost certainly do real damage. Second, filling an ice bunker with such big pieces of ice would be very inefficient cooling. The surface-to-volume ratio is pretty low. Instead, the ice should be broken up into much smaller pieces, thus far more surface area, for efficient cooling as air passes through the ice mass.
What size were they broken into? The icing tariff identifies three sizes: chunk, coarse, and crushed. One of the PFE people I interviewed described these sizes as follows. Chunk ice was large pieces, not to exceed 75 pounds (a quarter block, since the ice block is 300 pounds). Coarse ice was about the size of a large watermelon. Crushed ice was not literally crushed by machine, at least not in hand icing, and was defined as about the size of a man’s fist. (Note that there is no category for 300-pound blocks.)
The photo below is obviously posed, as neither man is actually engaged in moving anything, but it does show ice tools again, and the piece of ice is a quarter  block. The man on the car, called in PFE parlance the “chopper,” will chop this into smaller pieces if smaller ice is called for. The man on the deck using the pickaroon is called the “passer,” and the ice block is resting on an ice bridge. (This is a UP photo, image KE4-16, Richard Laurens collection.) 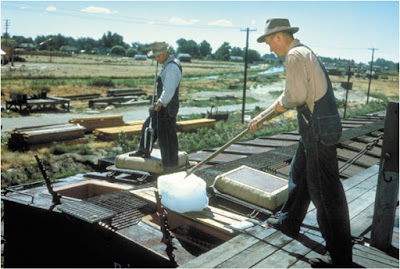 The shipper chose the desired size to be iced, primarily on the basis of how rapid the car cooling needed to be at the outset. With an empty car that was not particularly hot, and a pre-cooled load, chunk ice might be specified. With a warm car or loads that weren’t completely pre-cooled, coarse ice could be chosen. And if there was a serious need for a fast cool, crushed ice would be specified, and still faster cooling could even be achieved by adding some salt, say 5 percent or 7 percent.
Shippers often chose a coarser size for subsequent icing than for the initial icing, which was when the car got its first load of ice in the bunkers (icing the car before loading was called “pre-icing”). Usually salt would not be used after the initial icing when produce was shipped, and salt was uncommon in all produce shipping. Of course all these choices had an effect on the cost of “refrigeration service,” which would become part of the freight bill.
I have not been able to locate a video on-line showing this kind of hand icing. I have seen such film, but can’t find one at the moment. But the chopper worked really fast, skillfully chopping and dividing the quarter-block that he was passed, almost as the block was falling into the bunker. Here are some photographs to illustrate what I am describing (the first three are PFE photos from CSRM). The first shows two passer-chopper pairs at work from an ice deck with lowered aprons. There is an ice bridge in use at the farther car, to move ice across to the far hatch. The block on the apron is a quarter block. 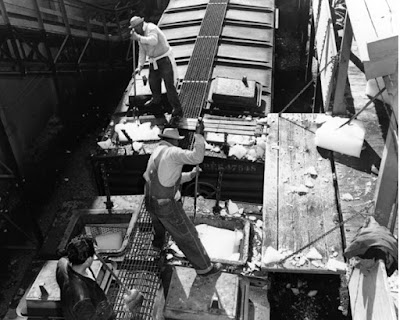 The second photo shows a chopper at work. He’s standing on the hatch plug, and an ice bridge is present at lower right. You can see he is chopping with his ice tool, right in the bunker opening. 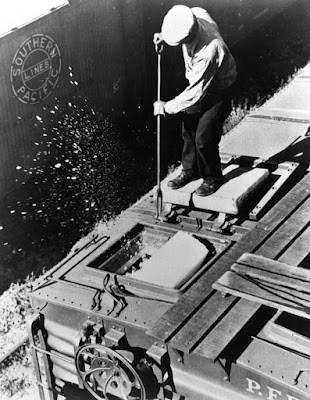 The third of these PFE photos was taken to show icing at night, and of course icing had to be done around the clock as needed. But of interest here, it shows the chopper just having sunk his bi-dent into the quarter-block to split it; pieces can then fall into the ice bunker. Note also that the passer has left some irregular chunks on the deck, probably when a block did not split cleanly. 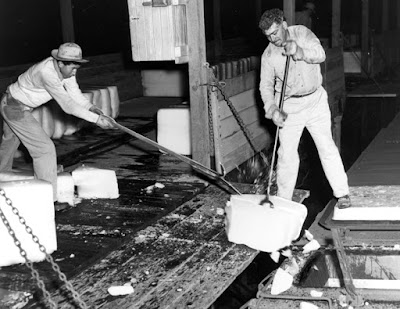 Last but not least, I want to show an example of icing other than PFE. Shown below is the Fruit Growers Express ice deck at Sanford, Florida. A PFE deck would have a roof, but FGE decks generally did not. Notice that the 300-pound blocks have been chopped a lot smaller on the deck, judging by the pieces on the ice bridge. 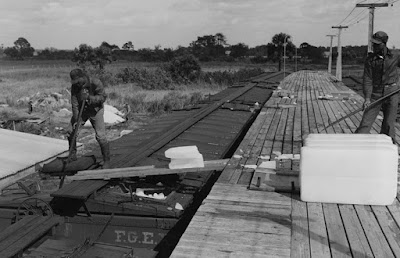 These photo convey as much as still images can do. You will just have to imagine the dynamics.
What does all this imply for modeling? First, the full-size blocks of ice coming onto a deck, whether with the aid of a continuous chain or not, would be the 300-pound size. Second, the blocks were split into quarter-blocks right next to a car being iced, so if any quarter-blocks are depicted at all, they would be right at the deck edge. Smaller pieces than that could result if a block split unevenly or broke into multiple pieces, so a few smaller chunks would be all right. But keep in mind that most of the sizing took place right at the car.
Tony Thompson
Posted by Tony Thompson at 12:41 PM