I introduced this topic with a post about the kinds of railroad shipping associated with the making of beer (not the shipping of the finished product), emphasizing malt and hops. That post can be found at this link: https://modelingthesp.blogspot.com/2019/07/beer-as-industrial-commodity.html .
In that post, I mentioned that malt, after its use to provide the liquid that is fermented (called “wort”), can be used for other purposes, and is then usually called spent grain. These include animal feed (well regarded as chicken, pig, sheep and cattle feed), as fertilizer, and as fuel. Fuel, you say? Yes, when dried it can be burned to provide heat for the brewing process, and some breweries do that; but in that situation it isn’t shipped. If you’re interested in this topic, here’s more: https://www.craftbeer.com/craft-beer-muses/sustainable-uses-of-spent-grain .
I should emphasize that this is not a small matter. For each gallon of beer produced, about 10 pounds of spent grain are left over. Being able to market this material can contribute significantly to the revenue stream of a large  brewer. Even home brewers may wish to make constructive use of the spent grain.
Spent grain is shipped in bulk for both fertilizer and feed, and is shipped in bags for feed. Accordingly, I have used box cars for the bagged product, and covered hoppers for bulk shipment, on my layout. Obviously any box car could carry bagged feed, but an interesting example might be a car from Manufacturers Railway Company (MRS), a captive rail service in St. Louis for brewer Anheuser-Busch. The MRS once operated a number of Mather box cars, and an MRS model in HO scale was produced by what was then the LifeLike Proto2000 line.
One of these model cars is shown here spotted at the small freight shed in my layout town of Shumala (this shed was described in an article in Model Railroad Hobbyist, in the issue for August 2018; this issue can be read on-line or downloaded, for free, at the MRH website, www.mrhmag.com ). 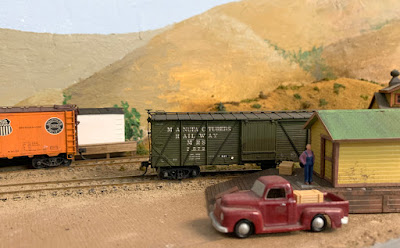 Shipping spent grain from the brewer in its own box car is a nice touch, though I am sure that all or nearly all of Anheuser-Busch’s spent grain was sold much more locally. But let me repeat that any free-running box car might have been loaded with a cargo like this.
Bulk shipping of spent grain for feed purposes might well be directed to a team track, where a consignee could unload the cargo with the help of equipment such as a mobile auger unloader (to see an example of such, consult this post: https://modelingthesp.blogspot.com/2017/11/unloading-covered-hoppers.html ) or other device. An example waybill might be something like this, directing the load to the team track in my layout town of Shumala: 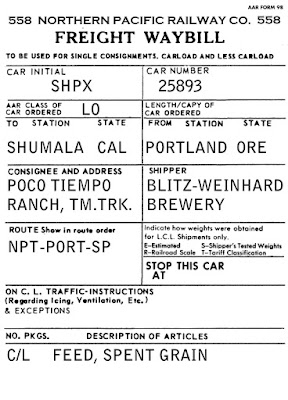 The Blitz-Weinhard Brewery in Portland was switched by the Northern Pacific Terminal, a switching road, which, like many terminal railroads, had all its paperwork produced by principal owner NP, as you see here.
Shown below is the car referenced in the waybill above. This is an InterMountain covered hopper, re-lettered with Champ decals and numbered for a series of Shippers Car Line cars with the same 1958 cubic feet capacity as the model. It also has reweigh and repack stencils, and the air reservoir stencil.

This car, of course, could find itself assigned to carry a variety of cargoes, as it is not lettered for any lessee or company-owned product.
I continue to examine other opportunities for railroad shipments of beer-related products that can plausibly move on my layout. This is part of the interest in operations for me.
Tony Thompson
Posted by Tony Thompson at 7:11 AM