Those interested in refrigerator car operations in the 1950s will know that most owners of such cars borrowed cars from other owners from time to time. Sometimes these were formal leases, sometimes they were other kinds of agreements, such as simple one-time loans.  The point of these agreements was two-fold: first, of course, for the borrowing or lessee operator to have enough cars to serve their shippers; but second, putting the cars to work generated revenue tor the lessor or loaner from otherwise idle cars.
Pacific Fruit Express was certainly no exception. Though their fleet of about 40,000 cars was the largest in North America by 1950, they nevertheless did not have enough cars to cover peak harvest periods in the August to October time frame. In the early 1950s, PFE’s own statistics show that about a quarter of all carloads moved by PFE in peak season were in foreign cars, that is, cars not owned by PFE.
Some of the “foreigns” were informal car loans, ad hoc arrangements with car owners in particular seasons, but most were either leases or car-use contracts. In a lease, an agreed number of cars was turned over to the lessee for the period of the lease, and operated as the lessee wished. In a contract, normally cars were supplied according to demand, rather than a block of cars all being turned over to the receiving user.
We know from employee recollections, conductor log books, and from photographs that the biggest source of PFE foreigns was American Refrigerator Transit (ART). I have discussed this in prior posts (for example: https://modelingthesp.blogspot.com/2011/08/modeling-freight-traffic-coast-line.html ). As far as I can determine, this was a contractual arrangement. Here’s an example (you can click to enlarge): 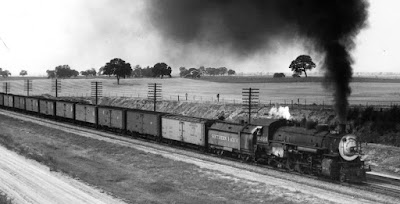 This photo, taken by Al Phelps near Antelope, California on September 10, 1950, shows SP Mikado no. 3306, with a 99-car train of all reefers, plus caboose, headed eastward and about to reach Roseville. The first three cars happen to be ART cars, though no other ART cars are recognizable in this train.
Two other major sources of foreign reefers in PFE territory were Merchants Despatch (MDT) and Fruit Growers Experess (FGEX, along with pooled operation of BREX and WFEX cars). Again, photos show these kinds of cars in trains and in yards, but important data from a conductor’s records provide statistics on these cars’ presence (see my analysis in this post: http://modelingthesp.blogspot.com/2011/02/modeling-freight-traffic-coast-line.html ).
Another well-known source was the Bangor & Aroostook Railroad (BAR). The BAR fleet was primarily intended to serve their own shippers of potatoes, which was a traffic peaking in the late fall and continuing through the winter. This was nicely matched to PFE, whose traffic was tapering off by then, and who would be happy to return the BAR cars in late fall. In this case, the car transfer was under a lease. The actual dates of the PFE lease were from June 1 to October 1 of each year.
I want to thank Ed Shoben, who contacted me with questions about the relation between PFE and BAR, and who sent me an interesting 1957 article from the BAR employee magazine, Maine Lines. I understand that the article was provided to Ed by Ron High. I have used the scans sent to me to create a document on Google Drive, which anyone can access at the following link:

This is a fascinating description of how the lease of the BAR cars to PFE looked from BAR’s perspective.
The article also mentions Merchants Despatch as a source of refrigerator cars for BAR. Those MDT cars were available as part of a long-running contract (since 1924), not a lease, and car availability was not always what BAR wanted, thus the ownership of a large fleet of their own cars.
Careful study of train views in the West will show an occasional BAR reefer in among the PFE and other reefers in a train. The example below is another Al Phelps photo, this one taken at Broderick, California (now part of West Sacramento) on September 3, 1955, with cab-forward SP 4179 powering a fruit block from San Jose. The BAR car nearest the camera is no. 7107. 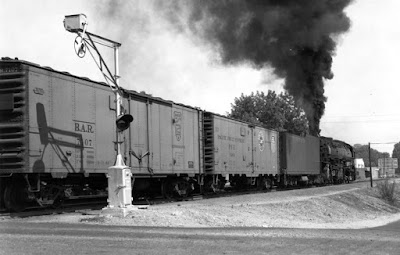 Another example, an SP photo, shows a BAR car in a freight train in a siding west of Truckee, meeting passenger no. 27, in March, 1952.

These photos both happen to show the new BAR sliding-door steel reefers, built by Pacific Car & Foundry as copies or near-copies of the PFE Class R-40-26. But BAR also had a number of wood-sheathed reefers.
(I should reiterate, as I’ve said several times in the past, that Santa Fe was emphatically not among the sources of foreign reefers for loading in PFE territory, and the same was true for PFE cars in Santa Fe territory. Cars of both fleets were returned empty to their owners, as employees of both companies have said, because neither wished to load its competitor’s cars in its territory.)
But let me return to BAR. For a modeler of PFE territory, as I am, including BAR reefers in one’s freight car fleet is both interrsting and prototypical. I will return to the BAR car fleet, and to modeling issues, in a future post.
Tony Thompson
Posted by Tony Thompson at 11:02 AM