Handling ice, Part 2: the ice itself

In the previous post, I talked about how ice was handled when it had to be moved along the length of a wooden deck used for icing refrigerator cars (you can review that post here: https://modelingthesp.blogspot.com/2019/08/handling-ice-on-ice-decks.html ). In the present post, I want to say a few words about the ice itself.
One of the largest ice consumers in the world in the early 1950s was Pacific Fruit Express, using about two and a half million tons of ice in 1952. A summary of the PFE approaches to ice (both natural and manufactured) can be found in the PFE book (Pacific Fruit Express, 2nd edition, by Thompson, Church and Jones, Signature Press, 2000). Here I want to just show a few illustrations.
Since the 1920s, the standard PFE manufactured ice block weighed 300 pounds. It was a truly imposing object to handle. Often in PFE ice houses and on ice decks, a sign could be seen, that read "That block of ice is bigger and tougher than you are. Watch it. Safety first.”
These ice blocks were made in rectangular steel containers called “cans.” The cans were handled with a system of overhead hoists. The first step was to fill the cans with city water, as seen in the photo below in the Roseville ice plant in 1924 (this was the largest artificial ice plant in the world). Six full cans weighed almost a ton. 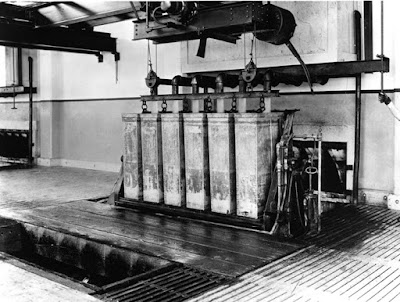 (These first three black-and-white images are PFE photos, from the author’s collection, now in the California State Railroad Museum.)
The filled cans were moved to an opening in the ice plant floor, where they were lowered into a circulating brine solution, cooled below 20 deg. F. All this planking is removable. 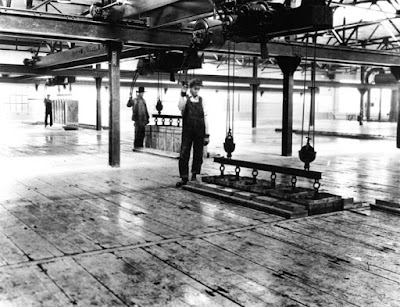 When a group of cans had fully frozen, they were lifted out of the brine and taken to a station where they could be hosed with warm water to loosen the ice, then the ice blocks could slide out. 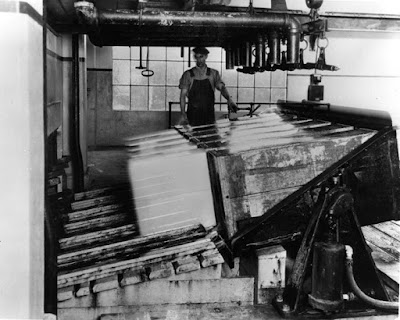 It’s important to recognize that the ice was frozen as quickly as possible. This means that dissolved air in the original water fill would be rejected by the freezing ice in the form of bubbles, but during rapid freezing, these bubbles could not escape and remained trapped in the ice, making it opaque. If freezing is done sufficiently slowly, these bubbles can escape and leave the ice clear, as is usually desirable for consumer ice.
Here is a photo of ice arriving on the ice deck in Roseville. It is obvious that the ice is quite white in appearance. This is what one sees in reefer icing photos from anywhere in North America. The burlap covers, incidentally, are to reduce ice block wastage (by melting) before they are needed. 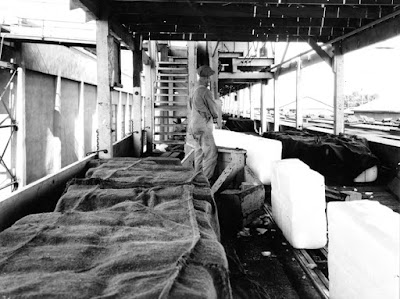 I mention this because some modelers have used clear plastic blocks to represent ice (several commercial kit makers have offered such ice, including Campbell and some others). But of course this is entirely non-prototypical. Note also that the ice blocks shown above do not have sharp edges and corners, but have become rounded with handling and wastage.
My view is that the least one can do with clear plastic ice blocks is to sand them to make the surfaces cloudy, and round all edges and corners. This is still a translucent ice block rather than white, but to many viewers it “reads right” as ice, where a dead white block might not.

Note that these figures have the two ice tools I described in the previous post (see first paragraph for link), the bi-dent at left, and the pickaroon. I will say more in a future post about my model ice deck.
I will return to modeling in reporting on changes to the ice deck in my layout town of Shumala in subsequent posts.
Tony Thompson
Posted by Tony Thompson at 10:39 AM