I have written a number of posts on this topic precisely because I think this is a part of layout modeling that is often neglected. One of the ways we can portray a region and a period is through use of correct graphics on highway trucks, and by correct, I mean the regional and period details of truck companies and truck lettering. I have shown a number of examples in previous posts, all of which on this topic are readily found by using “highway trucks” as a search term in the search box at right.
For the present post, I was chasing information on the Denver-Chicago Trucking semi-trailer that I showed in my post that described correcting the roof which a previous owner had unaccountably painted blue (that project turned out well, as I showed: https://modelingthesp.blogspot.com/2019/07/modeling-highway-trucks-part-5.html ).
Knowing that in more recent years there was a firm called Time-DC, and that the DC stood for Denver-Chicago, I looked into the history. I soon found that the very large trucking firm, Time-DC, was formed in 1969 in a merger of Time Freight, Denver-Chicago Trucking, and Los Angeles-Seattle Motor Express. I have already shown some semi-trailers lettered for the latter company (see that post at: https://modelingthesp.blogspot.com/2015/07/modeling-highway-trucks-part-3-more.html ).  I repeat below one of my earlier images, since those posts were back in 2015.

Obviously in my modeling year of 1953, long before 1969, all three companies, Time, D-C, and LASME, were independent and operating under their own names. Moreover, both Time and D-C became full nationwide carriers in the 1950s.
Once again, I turned to a great source for truck graphics, Graphics on Demand (you can visit them at: http://store.graphicsdemand.com/ ). They have a truly staggering array of trucking companies covered, but beware: all eras are intermixed. You have to spend a little time with your good friend Google to check on the various companies and when they were in business, and in many cases you also have to search out photos to determine which lettering schemes go with which period.
I will say, in passing, that there are plenty of 1950s schemes in their selection, even though the majority of the products are for distinctly more recent companies. My impression is that modelers of any era after World War II will find truck lettering that they can use. But it is very definitely a case of caveat emptor.
I used their Time Freight truck graphic on an Ulrich semi-trailer (these are usually available on eBay and comparable sites, though prices vary; worth watching sales for a bit before plunging <grin> but that’s your call). I applied the Graphics on Demand graphic, which is not a decal, but a shiny vinyl “peel and stick” product with a clear background, easy to work with, and completely made invisible with a coat of flat finish. Here is the result (you can click on the image to enlarge it if you like): 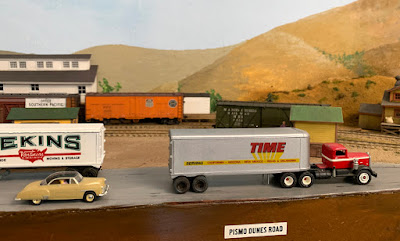 The truck is shown on Pismo Dunes Road on my layout, passing a Bekins Van Lines semi-trailer going in the opposite direction (also made with Graphics on Demand lettering).
I also wanted to add a semi-trailer for Associated Transport. Though originally formed by several trucking companies in the east in 1942, with routes from Florida to New England and as far west as Cleveland, it soon served a far wider territory. I can remember seeing Associated trailers in Southern California as a boy in the 1950s. Their lettering scheme was quite simple, and here is the model, using the Graphics on Demand lettering. 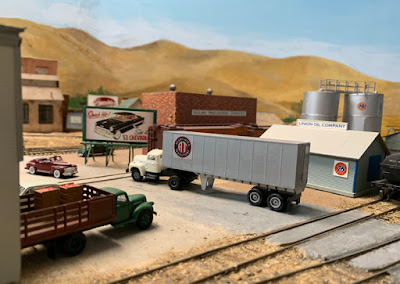 This is an ancient Tyco trailer that I like because it is rib-sided, as were many AT trailers. It’s shown on Bromela Road in my layout town of Ballard, looking past the Guadalupe Fruit Company building at left.
I repeat my comment, that I believe highway trucks offer us another modeling tool to depict the region and era represented by our layouts. I will continue to research possible additions to my own semi-trailer fleet in the near future.
Tony Thompson
Posted by Tony Thompson at 9:00 AM