In my first post on this topic, I described the ways that ice blocks were moved on icing decks, to bring them from storage to a position alongside a refrigerator car to be iced. On any but small ice decks, there was ordinarily an endless chain which was used to move ice along the deck. But in a very small deck, too small to justify the cost of a chain, a “runner” was used to guide the ice as workmen shoved or pulled it along with their ice tools. You can read that post at: https://modelingthesp.blogspot.com/2019/08/handling-ice-on-ice-decks.html .
My own layout has a very small ice deck, barely over two cars, and I think this is relevant because most layouts only include quite small decks like mine. My layout’s ice deck is located at and owned by a company called Western Ice. As was common practice in small towns, Pacific Fruit Express has contracted with Western  to provide icing services.
Western Ice only manufactures consumer ice (usually very slowly frozen so as to be clear), and the large ice blocks for reefers (more rapidly frozen and thus “cloudy” or white with innumerable trapped air bubbles) have to be brought in with ice service cars, operated by PFE. I described the ice used for reefers in a previous post (see it at: https://modelingthesp.blogspot.com/2019/08/handling-ice-part-2-ice-itself.html ).
I have discussed modeling of ice service cars previously, along with some comments about the smaller ice facilities in Pacific Fruit Express territory. (That post can be found at: https://modelingthesp.blogspot.com/2013/07/more-on-ice-service-reefers.html .) Years ago, I decided to model Western Ice as a small ice storage building that would be appropriate to serve a minor branch line such as my Santa Rosalia Branch.
Western’s ice house itself is simply a box built of styrene clapboard with corner trim boards. It only has one window that’s visible, next to the office door on the near wall (in the photo below), and has a raised consumer delivery door next to it. On the track side is another door, for unloading the shipped-in block ice for reefers. 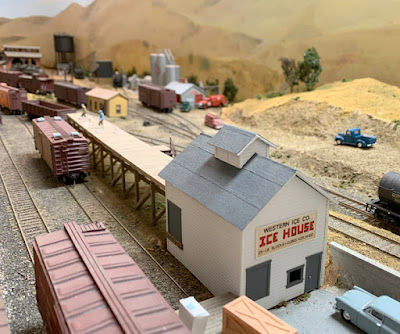 In the photo above, the ice deck is on the far side of the ice house. Below is a photo of this ice deck as built. It is just a set of timber bents, with a deck scratchbuilt from individual boards of pre-stained stripwood, then weathered. It has a stairway at the back. There is an ice door on the ice storage house, from which ice blocks can move out onto the deck. But there is no provision for moving ice along the deck. 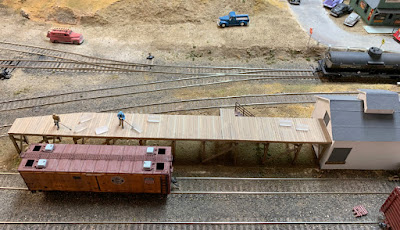 The open hatches of the reefer standing at the deck can be closed when desired.
The support for this deck is, as I said, a series of bents, grouped into “towers” in pairs, much like PFE did on many decks, as can be seen in the PFE book (Pacific Fruit Express, 2nd edition, Thompson, Church and Jones, 2nd edition, Signature Press, 2000). 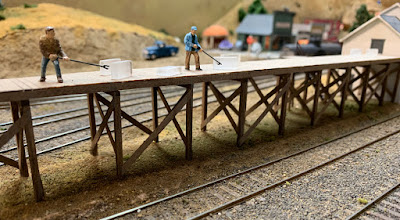 In the photo above, you will also notice the workmen on the deck, modeled so that one has a pickaroon and the other has a bi-dent, prototypes of which were shown in the first post of this series (see the link in the first paragraph of the present post). I showed awhile back my model figures with these tools (see the photos at: https://modelingthesp.blogspot.com/2017/05/figures-part-2-modifications.html ). Here is a view that includes the reefer. 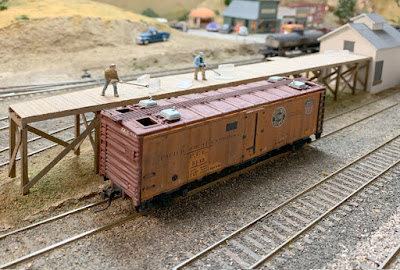 But as I said, the deck as originally built lacks any means of assisting ice movement along the deck. That’s the modeling project that I will describe in a later post, adding a “runner” on the deck that can serve as an ice guide.
Tony Thompson
Posted by Tony Thompson at 11:48 AM