In the earliest days of refrigerator car icing, decks for icing or re-icing of cars were simply wood, as in the photo below. If a deck like this were not pretty wet, moving ice along it was not easy. This interesting 1915 photo of icing was taken at Portola, California on the Western Pacific. Ice has been delivered from the box cars at right, on an elevated track, and is being placed in the refrigerator cars at left. Deck is all wood, but the ice only has to be moved across the deck in this situation (Whitehead photo, Richard Laurens collection). 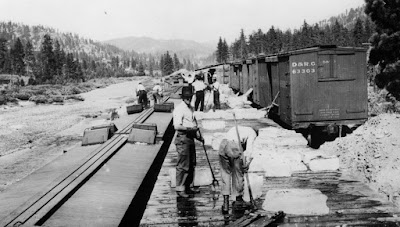 This photo is included in the PFE book (Pacific Fruit Express, 2nd edition, Thompson, Church and Jones, Signature Press, 2000). The deck was owned and operated by PFE.
Before many years, it was realized that adding a “runner,” often a channel to keep the ice moving in a straight line, was an improvement. Early ones were sometimes wood, but a strip of sheet steel was better. The photo below, a detail of an image from the American Refrigerator Transit book (by Maher, Michels, and Semon, Signature Press, 2017) shows the ice deck at Grand Junction, Colorado, probably not long after 1920. The channel for ice blocks can be seen approximately in the deck center (photo from the History Colorado collection, courtesy Gene Semon). 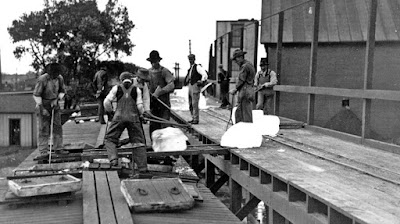 On a deck serving substantial numbers of cars, however, the ice volume to be moved was so large that mechanization was essential. Almost always, the solution was an endless chain, with projecting “dogs” at intervals to move the ice blocks. The photo below, also a detail from one in the ART book, shows the chain on the Harlingen, Texas deck in the 1930s (Central Power & Light photo, courtesy Gene Semon) 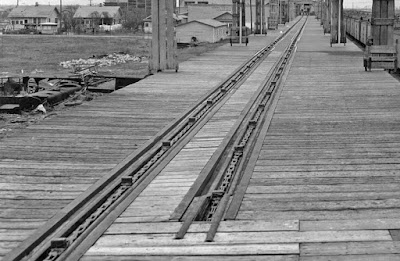 There are lots of photos of big ice decks with ice blocks being moved with chains. Here’s an example, an excellent Don Sims photo of icing at Yuma. Ice blocks on the chain can be seen at far left. 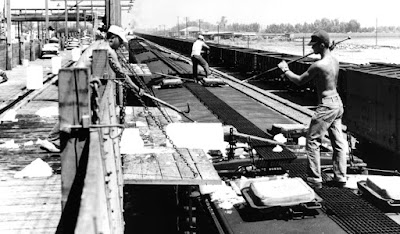 A quick word about ice tools. There were two “standard” tools used throughout the U.S., one for moving ice (that was called a “pickaroon” by PFE people), and an ice-chopping tool called a “fork” or a “bi-dent,” the latter I guess by analogy with a trident. Both are shown below in one of the greatest of all icing photos, taken by Jim Morley at Roseville in 1948. The “passer” on the deck is moving an ice block to the “chopper,” who will chop it to smaller chunks as it reaches him and starts to fall into the bunker. 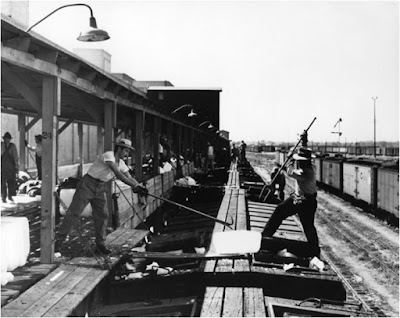 The pickaroon has a wooden handle and obviously could be used to either push or pull ice blocks. The bi-dent is forged steel and a very heavy tool. The photo preceding this one shows the same tools in use.
In the early 1950s, the locations that iced lots of cars began to add mechanical icing, using machines that ran along the deck on rails and could take ice off the chain and break it up to the desired size as it was being dumped into ice bunkers. This was in fact no faster than manual labor, but only required one or two workers, instead of 8 to 15 workers doing hand labor. But smaller places continued to ice cars by hand.
Like other companies responsible for providing ice for refrigerator cars, PFE built and owned its largest plants, which manufactured ice. But in smaller towns, they would contract with a local ice company to provide ice.
In some cases, PFE would build, own and maintain the ice deck, even though the local ice company supplied the ice and the labor for icing. Such a PFE deck was almost always located at the local company’s ice plant. In other cases, the local ice company would build and own the deck itself, thus providing all services. Many examples of all these arrangements are documented in Chapter 13 of the PFE book.
Small decks, that could not justify the expense of adding a chain, let alone icing machines, were most easily worked with a “runner,” as shown above, a channel or strip of steel sheet that made it easier to move ice along an icing deck. This is especially pertinent for models. The ice deck on my layout is pretty small (as indeed are nearly all model ice decks), and a runner seems the most that could have been included on it.
I will address modeling such a runner for my layout’s ice deck in a future post.
Tony Thompson
Posted by Tony Thompson at 10:10 AM