I have written in previous posts, some time back, about the question of conveying to visitors, whether model railroaders or not, the locale that your layout portrays. The problem may be quite easy to solve, if for example you model the Burlington through the suburbs west of Chicago, or Chama, New Mexico, or the warehouse district of New Orleans, because almost anyone will know where those places are. Or if you model a famous railroad location, say, Hinton, West Virginia, people don’t need to know exactly where in West Virginia it is, because of its prominence in the lore of the Chesapeake and Ohio.
But many of us model less well-known places or regions. My own layout is set in the central coast area of California, as it is known, and Californians know pretty accurately where it is when I say it is in the area of Santa Maria. Even non-Californians familiar with the Southern Pacific will have a good idea of my location when I say it is a ways south of San Luis Obispo.
My first post about identifying layout locale included a simplified map of the imaginary branch line I model, showing its relation to the SP main line, and the map is simply modified from the SP’s own map of the Coast Division. (that post can be found at: http://modelingthesp.blogspot.com/2011/01/layout-design-locale.html ). That map at least shows the towns nearest my branch line.
But even that interesting map has no context for many visitors. I recently noticed a map which showed its general area, then an enlargement of one segment. “Exactly!” I thought. I immediately created an outline map of California so I could show the area of my layout location, with the SP main line of the Coast Route indicated (the Coast Division extended from San Francisco to Santa Barbara, with remaining trackage into Los Angeles as part of Los Angeles Division). Here’s the result (feel free to click to enlarge the image, if you wish), with my branch line diverging toward the ocean. 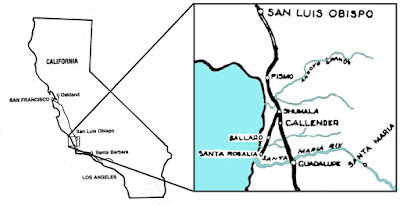 The map alone, of course, does not portray anything about what I am trying to model in this locale, but at least does provide the geographic context of the layout I’ve built.
I have recently been musing anew about how to describe my layout goals. In a way, of course, what I have done in building my layout expresses perfectly what my goals are, if you can just perceive them, but that doesn’t put them into words. So I have had, as Pooh would say, “a small think.”
A few background remarks on this topic were included in a post that followed my “locale” post, and had as its main subject the always-vexing question of how one explains one’s layout goals. (You can read that discussion here: https://modelingthesp.blogspot.com/2013/06/explaining-your-layout.html ). More recently, I expanded on this topic of layout goals, and how very many varieties of them one may encounter (see that post at: https://modelingthesp.blogspot.com/2018/04/layout-goals.html ).
The just-cited post on layout goals presents my own personal goals at greater length, but to summarize, I am trying to recreate freight railroading as it was practiced on the Southern Pacific in 1953 in rural areas of the central California coast. For that goal, reproducing any one specific place isn’t vital and hasn’t been attempted. Instead, effort has been devoted to freight cars and locomotives that are accurate both for 1953 and for that part of the SP, along with typical products being both shipped and delivered, and operational procedures typical of SP that are the core of my layout operating sessions.
Below I’ve shown a typical view at my layout town of Shumala, with the SP’s mainline Guadalupe Local, behind an Alco RSD-5, in front of a copy of the SP’s Sylmar, California depot, waiting for the local switcher to tack on the rear part of the train so the Local can depart. 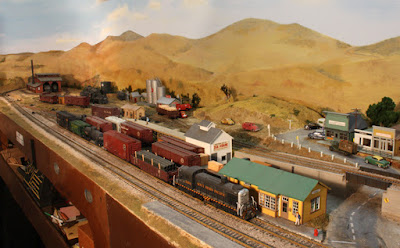 To most people, those hillsides of golden grass in the background do shout “California,” even before they know more about the locale, and that’s a good start.
As I’ve said elsewhere, the entire idea of modeling an imaginary branch line of a familiar and well-known railroad was something I encountered the year I lived in England, and went to many weekend model railroad exhibitions. The typical exhibition layout, small enough to be readily portable, is an imaginary branch line of the Great Western, or London and North Eastern, or whichever railway was chosen. I liked the way this works, in that viewers readily understand the context of what they are seeing, and I have ended up doing it myself.
There is a sense in which generalizing how things looked and worked in a particular area is more effort than simply modeling what was there in a particular place and time. Maybe not less modeling effort, but in some ways more research and analysis effort. But I enjoy those things, and for the goals I have, it works for me.
Tony Thompson
Posted by Tony Thompson at 10:55 AM