Most railroads had an organizational entity that they called “Car Service,” and any one that didn’t, certainly had some kind of unit that did the same work, whatever its name. What was “car service” in this context? It was primarily car distribution, that is, getting empties to where they were needed for loading, along with the record keeping of car activity, and also reporting of car movements.
It’s hard to believe that some of the record-keeping and reporting was even possible in the day of hand-written or typed records, but armies of clerks did all the work. For example, every freight car passing through a junction between two railroads was reported back to the car owner, reports made every day, which would permit tracing of cargoes or astray cars. In that sense, each railroad knew where all its cars were, or at least the most recent junction that each car had passed.
Those cars passing through each junction had to be recorded for a second reason: if they were returned empty via their loaded route, the usual procedure for unneeded empties, they had to be routed back through each junction they passed when loaded. And if a railroad attempted to hand off an empty at the wrong junction, the receiving railroad could and did refuse it. That ensured that those who benefited from the car’s loaded revenue, would fairly share the expense of returning the empty.
Perhaps the most important part of the Car Service responsibility was the delivery of empty cars, not just any cars but the correct cars, to where they were needed for loading, when they were needed. The responsible official at any particular location, usually a station agent, would call a Car Distributor, and he and his clerks, having collected requests from station agents all over their assigned territory, would arrange to send the needed empties.
The main tool used to identify the “pool” of empty cars on the railroad was a report, filed every morning by every station agent on the railroad, giving the status of cars in that station’s territory, including those expected to be  made empty that day. This enabled Car Distributors to keep track of cars of every type that might soon be available for loading, in addition to empties already in yards. You can readily imagine the scale and complexity of this task.
Last year I showed photos from an article in the Southern Pacific employee magazine, the Bulletin, about the Los Angeles Yard Office, and though that is a separate part of the paperwork connected with freight car movement, it does add something to this topic. (You can find that post at this link: https://modelingthesp.blogspot.com/2018/05/clerks-waybills-and-all-that-waybills.html .)
Shown below is another of the many SP examples out there of rooms full of clerical forces dealing with freight paperwork and car distribution. This one was taken in San Francisco and appeared in the October 1951 issue of the Bulletin. 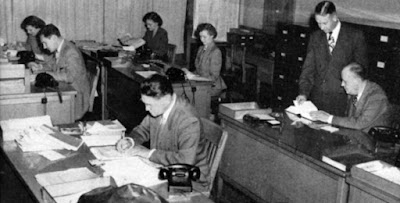 Here’s an additional example, taken in the Gerber, California yard office, and almost all of these people are clerks. The photo was in the April 1952 issue of the Bulletin. 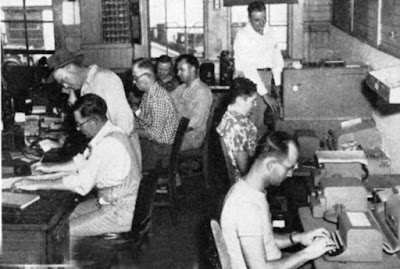 At this point I should emphasize that neither I nor practically any other modeler would wish to reproduce the mountains of paper records once created (and stored) by railroads, nor for that matter many of the individual documents making up those mountains. But I do want to suggest the existence of that paperwork in the way I operate my layout. That is the basis for my interest in waybills, which were indeed handled by freight conductors, and dropped off with or picked up from station agents.
I have just placed an interesting document about the topic of Car Service organizations on Google Drive. It is an article, from the July-August 1970 issue of the Bangor & Aroostook Railroad employee magazine, Maine Lines, and was furnished to me by Ed Shoben, the source for the BAR article I posted last month as part of an article about the BAR reefer fleet being leased to Pacific Fruit Express (that post can be viewed at this link: https://modelingthesp.blogspot.com/2019/08/foreign-reefers-in-pfe-territory.html ). Here is the link to the BAR item on Google Drive:

You may notice that this article also contains information about the lease of BAR reefers to PFE during the summer and early fall.
As I stated, most of us are delighted to ignore, in our model worlds, the great bulk of the prototype’s paperwork, and not least, most of the activities and paperwork of a Car Service Department. But recognizing what that part of the railroad did is a help in understanding how freight cars were moved. And that’s something that a lot of us want to understand better, and try to model better.
Tony Thompson
Posted by Tony Thompson at 10:51 AM