I showed an example of a Sherman tank as a load on a flat car in the previous post, and there was only a single tank on the car because, as a 50-ton flat car, it could carry only one tank of the roughly 35-ton weight of a Sherman (that post can be found here: https://modelingthesp.blogspot.com/2019/09/roco-flat-cars-part-7-armored-vehicles.html ). This series of posts, however, is primarily about the Roco heavy-duty flat car, with a capacity of 100 tons, and thus suitable for two vehicles of the weight of a Sherman.
I do have several Roco Sherman models, but wanted to add some variety. Roco over the years have also offered an M7 vehicle, which was a howitzer mounted on the M4 Sherman hull. This was a 105-mm howitzer, making the vehicle essentially a self-propelled gun. As such, it offered great flexibility compared to towed artillery, and remained in use through the Korean War. The M7 was often used in tandem with tanks in Korea, and accordingly would have been in training use at Camp Roberts, on the SP Coast Line not too many miles north of the locale of my layout.
I have modeled a Roco M7 similarly to the Sherman I showed previously, adding decal lettering from Microscale set MC-4279 and also similar blocking for transport as was done for the Sherman. Here is a view of the M7 model, with attached blocking. 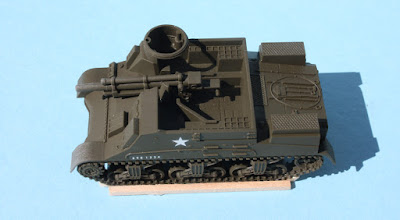 In this view, the ring mount for a .50 caliber machine gun is prominently visible, but these guns would not have been in place during shipment.
Shown below are these two vehicles, a Sherman and an M7, suitably blocked on the Roco heavy-duty flat car. The typical M7 only weighed about 25 tons, while a typical Sherman was more like 35 tons; obviously their combined weight was well within the 100-ton capacity of the Roco flat car. 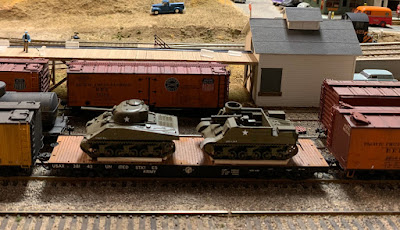 The loaded car is shown in a train on the siding at Shumala on my layout, with the SP’s main line in the foreground.
Another prototype example, in this case Sherman tanks almost exclusively loaded on 50-ton flat cars, thus one tank to a car, is this photo from the Southern Pacific in Indio, California, of tanks being unloaded for desert training in 1942. (U.S. Army Signal Corps photo) 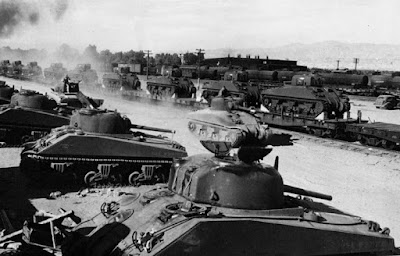 I want to vary my armor loads, since I don’t plan to try and operate any full trains of military equipment. Instead, my loads will depict individual vehicles being moved from one training facility to another, or perhaps in a repair cycle (waybills of course will reflect that).
The waybills I use for military moves on SP’s Coast Line take advantage of the presence of Camp Roberts, home of the 7th Armored Division at the time I model. Here is one example of a waybill I might use for the two-vehicle load shown above. It is a U.S. Government waybill since this is government property: 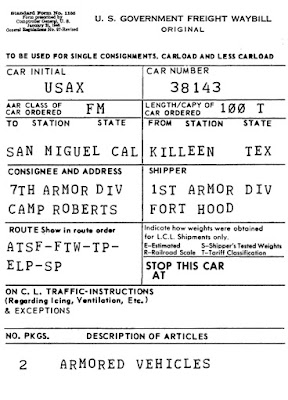 This bill, which happens to have been filled out with a Teletype type face, reflects a movement from what was the primary Army armor facility in 1953, Fort Hood, Texas, to Camp Roberts.
Armor loads allow some indication of the recent (for my layout) Korean War and training in its aftermath, and in addition are suitable for my layout’s locale on SP’s Coast Line.
Tony Thompson
Posted by Tony Thompson at 11:11 AM